A story about idiots, good people, a raven and wolf. 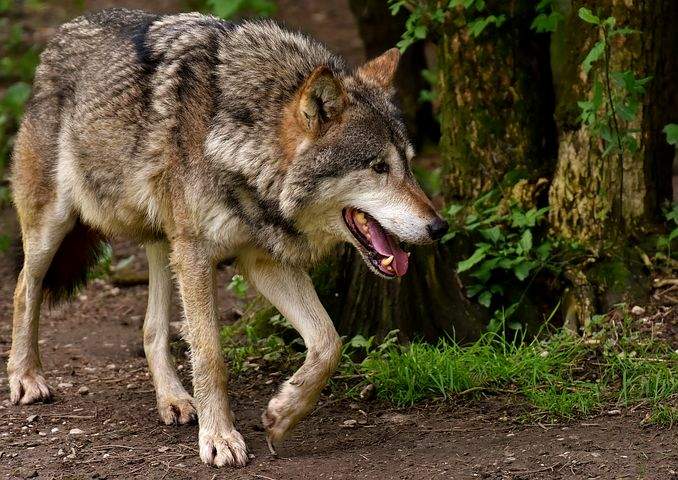 Giddeon was the king of the West.

A full-blooded idiot like most royals. It seems to run in those families. All related to each other and with a similar look and expression. The people were used to it. Common sense was not asked for a king, he just needed to be born in the right bed. Gideon apparently was although he couldn't remember it.

His mother was close to a heart attack as she saw him after the people who assisted her brought her the child they claimed she gave birth too. She was sure that what they showed her was not hers. She been tricked and screamed her lung out.
Gideon only looked at her. No sign of recognizing her and her screaming didn't upset him either.
Long story short she ran off to the forest where time does not exist. Finding the child that was stolen from her was her first and only priority, not taking care of someone else's creature.

"I have a friend I think you would really like", the raven said to the upset woman he once found in the forest. She lost her voice after screaming on top of her lung for too long. He felt pity for her and had observed and followed her for months. He dropped the piece of cheese at her feet he just stole out of the palace's kitchen.

"Come along, you can eat while you walk."

The raven decided to sit on her shoulder so he could guide and talk some sense into her, besides the fact, he didn't mind to be carried around by a woman. It gave him certain respect and she brought some glamour into his life. The other animals seem to respect her.

"About that Giddeon you are right. He is not your son. They switched him for your child but you already knew that. A good friend of mine saved your kid and you better hurry because they are searching for him. The "good people" I mean. As you know they always know better and think they can save the world by exchanging young life and nature for their products".

"Keep telling yourself that woman," he said, "name it the way you want as long as you keep walking. It took me long to find what is yours. You don't like the cheese?"

As they arrived at a dark part of the forest a huge wolf waited for them.

"You thought I would bring you someone else?"

The wolf looked at the woman's face and nodded, turned around and disappeared into the bushes.

"We better follow him", the raven said, "before he changes his mind and keeps it himself."

"No chance I already have 12 of my own. He's in there", the wolf said to the woman as he pointed in the direction of a cave. "Take what is yours and leave at the end of the cave. Do not come back here or you will regret it."

For a moment she hesitated. Tales taught her that ravens and wolves are thieves and cannot be trust but life proved those who call themselves "good people" were most evil of all.
"Thank you", she said and went into the cave. No matter how this story would end at least this was her free choice.

The picture is a pixabay.com pic.

_My 3x 5 minutes are up. Thank you @fredkese for the daily prompt.

This is an Invitation to join #ccc for [Guaranteed 👍 Daily Income 💵 and Payout 💸 for Newbies (2.0) 🐟 🐜 🐛 in #ccc 👣 and Follow 👣 the Honor Code 🏅 - the Creed (Conditions and Limits Inside)](https://goldvoice.club/steem/@freedomshift/guaranteed-daily-income-and-payout-for-newbies-2-0-in-ccc-and-follow-the-honor-code-the-creed-conditions-and-limits-inside) <br>AND <br>the latest update <<< _please click to read._

Great choice! I'd like to know how she chooses in the cave too.
I love that it's a free choice/destiny tale. I haven't read much of yours since #marchmadness, and that is not right! Love how your mind works.

No need to feel bad about it. I don't think I wrote much of any interest after the #MarchMadness except for some weekenfdreewrites. Somehow I get lost here too in all these posts, what is going on or not, in between my hospital and home life. Time goes fast and I was not very productive.

Thanks for stopping by and your kind words.
💕

I'm sorry to hear you are not well. My son is not well and illness is very hard to deal with. Especially hospital stays which are traumatic.

Sorry to hear about your son. I hope somehow he gets over it soon. It is hard to deal with for sure.

I had to leave because my kid stayed home alone during all these days. It was a bad summer and I am still suffering, trying, going on. Since it only got worse. Wish I could cure myself, or just ease... But it is easier said as done.

Keep my fingers crossed for your son, all of you. 💕

I'm so sorry. It's so much more difficult when you have children too!

I'm so sorry. It's
So much more difficult when
You have children too!

Well written @wakeupkitty, it makes me really excited to read more, it's awesome.

It has therefore got a 100% upvote from @thisisawesome, for the Awesome Daily Upvotes in category Freewrite, I give out 1 such vote in that category per day, plus 3 more in other categories, and your post will also be featured in todays Awesome Daily report for more visibility.

Thank you very much for taking the time to read and comment it. I really appreciate it.
💕

Thanks @wakeupkitty, and thank you very much for creating awesome content.Posted with

Beautiful story and I'm glad you are back to writing. Hope this isn't a one off. Hope she got her son

I assume she does and otherwise they put her on a trail. It is better as being lost in a forest.
💕

She knowsbher way back home with her baby. Nice piece

She has to find a new way. The wolf said she should not return and if she would regret it.

There is no home.
She left and Giddeon is king.
She went to a certain wood and the question is if her baby is still a baby... (Giddeon is not).
💕

Do you know that you can earn NEOXAG tokens as passive income by delegating to @neoxiancityvb. Here are some handy links for delegations: 100SP, 250SP, 500SP, 1000SP. Read more about the bot in this post.

Thank you for your upvote and comment. Since I use partiko I can not see any link. I will have a look at the account mentioned.
Thank you once again 💕

Great story, you have left me with many questions though, but that is as it should be with any good story xx

@wakeupkitty, Sometimes surprising events happens and people ruled by those who are not deserving but yet people tolerate them. And yes, people who have the Mask of Goodness reveals the most evil true face. Stay blessed.

Gentleman! Your story is awesome.

Thank you very much for taking the time to read it. It is nice to hear people still read stories and like it.
Thank you for leaving a comment.
I wish you a great day.
💕