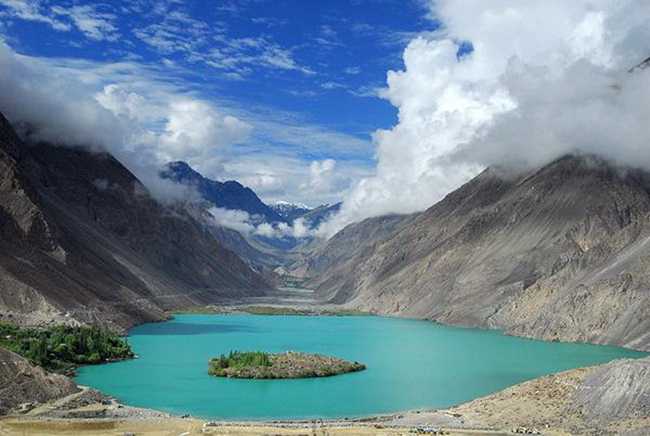 Saiful Muluk is a mountainous lake located at the northern end of the Kaghan Valley, near the town of Naran in the Saiful Muluk National Park. The lake is a source of the Kunhar river. At an elevation of 3,224 m (10,578 feet) above sea level, the lake is located above the tree line, and is one of the highest lakes and is the "National lake of Pakistan" .

The Lake Saiful Muluk is named after a legendary prince. A fairy tale called Saif-ul-Muluk, written by the Sufi poet Mian Muhammad Bakhsh, talks of the lake.It tells the story of the prince of Persia named Prince Saiful Malook who fell in love with a fairy princess named Princess Badri-ul-Jamala at the lake.

Saiful Muluk is located in the Mansehra district of Khyber Pakhtunkhwa, about 9 kilometres (5.6 mi) north of Naran in the northern part of Kaghan Valley. Malika Parbat, the highest peak in the valley is near the lake.

The lake is accessible from the nearby town of Naran during the summer season but access during winter is limited.

Saiful Muluk was formed by glacial moraines that blocked the water of the stream passing through the valley.The Kaghan Valley was formed in the greater Pleistocene Period dating back almost 300,000 years when the area was covered with ice. Rising temperatures and receding glaciers left a large depression where glaciers once stood. Melting water collected into the lake.

I have visited many places, watched culture, explored nature, and architecture. I feel lucky sometimes that I have got that opportunity to visit so many places. I am really lucky AF and thanks to my dad. I have been into mountain areas, islands, beaches, and structural spaces.

I hope you've enjoyed this little blog of mine, and I'll try and bring you something a little more interesting tomorrow (I promise).

I pray everyone is staying safe and using commonsense during these crazy times. Take care and thank you for taking the time to read my little post.Thanks
@wajishah