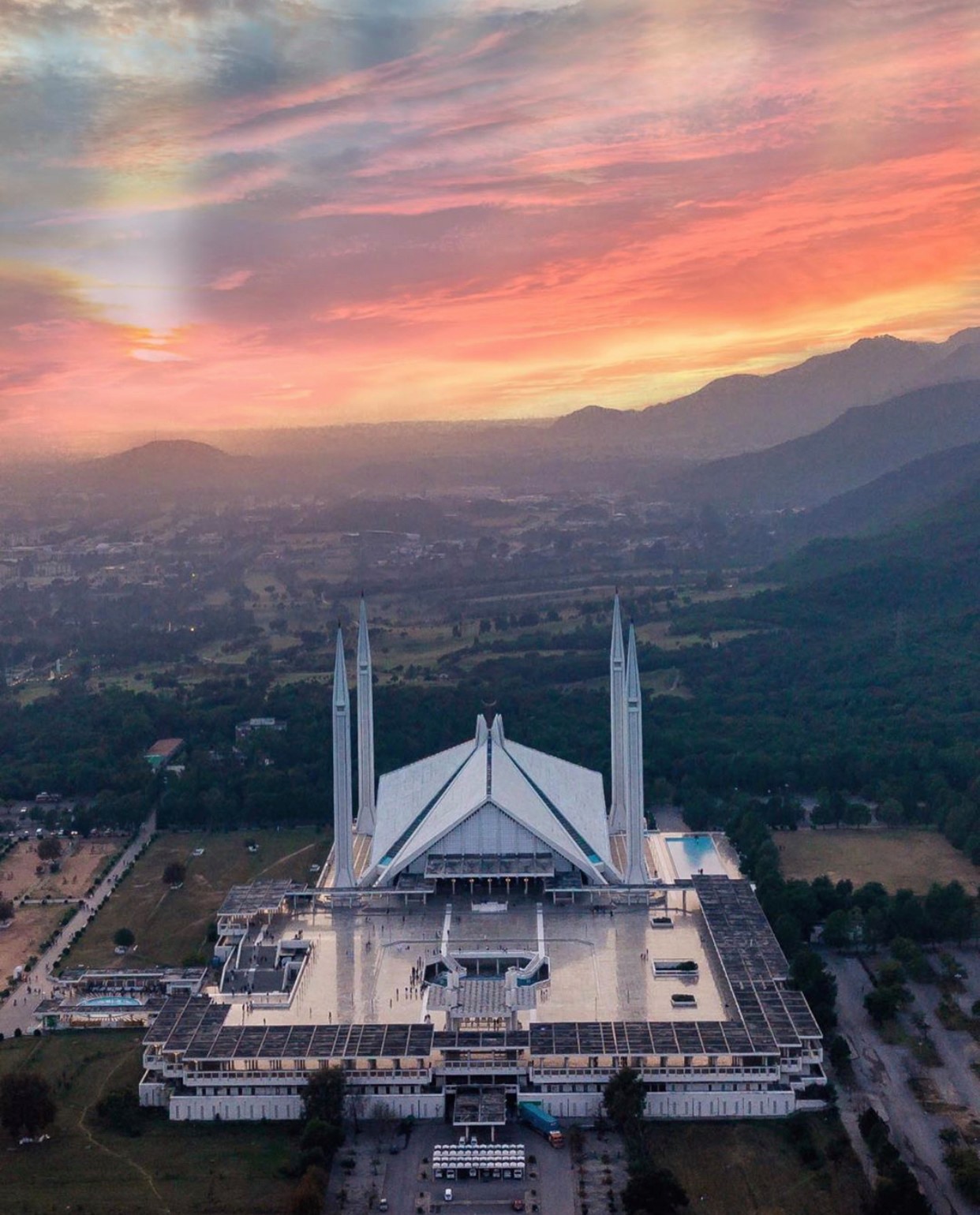 The Faisal Mosque ‎ is a mosque in Islamabad, Pakistan. It is located on the foothills of Margalla Hills in Islamabad. This mosque features a contemporary design consisting of eight sides of concrete shell and is inspired by a Bedouin tent.
This mosque is a major tourist attraction in Pakistan, Islamabad in particular, and is referred as a contemporary and influential feature of Islamic architecture.

Construction of the mosque began in 1976 after a $120 million grant from Saudi King Faisal, whose name the mosque bears. The unconventional design by Turkish architect Vedat Dalokay was selected after an international competition. Without a typical dome, the mosque is shaped like a Bedouin tent, surrounded by four 260 feet (79 m) tall minarets. The design features eight-sided shell shaped sloping roofs forming a triangular worship hall which can hold 10,000 worshippers.

Combined the structure covers an area of 54,000 square ft, the mosque dominates the landscape of Islamabad. It is situated at the north end of Faisal Avenue, putting it at the northernmost end of the city and at the foot of Margalla Hills, the westernmost foothills of the Himalayas. It is located on an elevated area of land against a picturesque backdrop of the national park. The largest mosque in Pakistan, the Faisal Mosque was the largest mosque in the world from 1986 until 1993, when it was overtaken by mosques in MENA region of Saudi Arabia. Faisal Mosque is now the fourth largest mosque in terms of capacity.

I tried to capture the spirit, proportion and geometry of Kaaba in a purely abstract manner. Imagine the apex of each of the four minarets as a scaled explosion of four highest corners of Kaaba – thus an unseen Kaaba form is bounded by the minarets at the four corners in a proportion of height to base. Shah Faisal Mosque is akin to the Holy Kaaba in the designer's imaginative eyes. Now, if you join the apex of each minaret to the base of the minaret diagonally opposite to it correspondingly, a four-sided pyramid shall be bound by these lines at the base side within that invisible cube. That lower level pyramid is treated as a solid body while four minarets with their apex complete the imaginary cube of Kaaba.