Ulog # 3: The legend of La Llorona 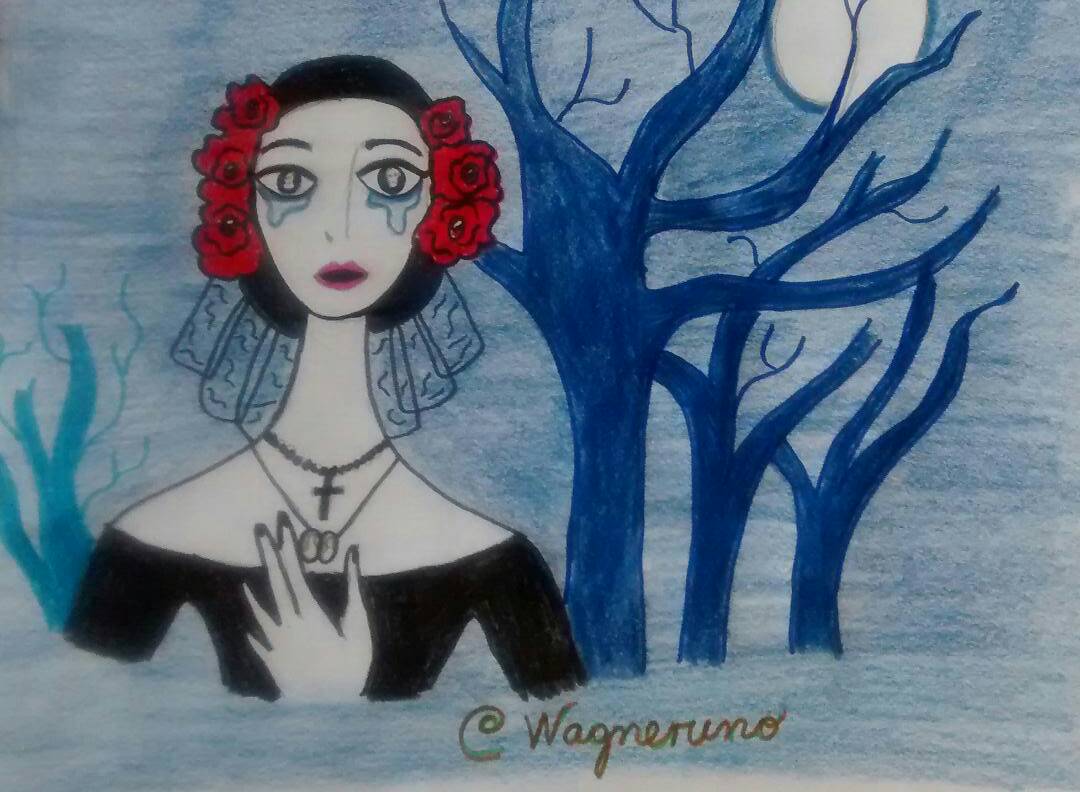 One of the most popular legends in Mexico is La Llorona. This very popular tale has as its protagonist a woman that I have dedicated myself to draw for you, my esteemed Steemians.

I invite you to read the legend of La Llorona:

... The campfire burned and the flames stirred as if they wanted to escape something. Suddenly, everything was silent, and no one was laughing, nobody spoke. Only the whisper of a cold wind that caressed our faces and moved our hair remained. Then, as if it were a horror movie, a woman emerged from the trees.

We all knew who it was, our grandparents and parents had warned us of its existence: La Llorona, "Beware of the Llorona!".
I tried to tell myself that it was not real, that it could not be real, but in reality it became a furrow that prevented me from differentiating it from myth.

Suddenly, La Llorona lifted the veil that covered her face. As if it were a demonic rite, she revealed her pale, emaciated face. Her eyes seemed to rummage in the depths of the soul. She looked at me and I tried to look away but some kind of magic prevented me. I looked at her and then she started talking ...

The woman screamed and I felt my skin shudder. I looked at the faces of the others and a strange pallor had invaded them. Their bodies were still as if they feared to draw the attention of that entity; I can not deny it, I was afraid too. I wanted to move but La Llorona was too close to me, my legs just did not respond. Suddenly, their screams ceased and a dark calm invaded the environment. However, the silence did not last long.

"No, I was not like they see me now, I was beautiful, not these spoils of a tormented woman, but it was their fault! The fault of that man. He cheated on me, he broke my heart! "La Llorona said as heartbroken as if she were able to relive the moment that upset her, over and over again.

I loved him, but we were very different. He was a Creole, his parents were rich and I had nothing, only my love, so without thinking I gave myself to him. We formed a bond that gave as a result two litte ones ... my children.

A few years passed and the love that I believed would be forever, ended. In the cruelest way he told me one day : 'I'm going to get married'; I went crazy, I told him that he could not do that, that I loved him, that we had two children, but he held my hands violently and said to me that I was an 'nobody' who just wanted his money ... he said, he said that I did not love him and that he would take away my children! My children, my little children ... So that night I knew what I had to do, he could not take them away, I could not allow it.

That same night I told them that we would go for a walk ...
We walked, my children were very happy, I remember their little jumps and their joy so childish, so innocent. I almost regretted what I was about to do but. Just as we reached the shore, I heard a voice shouting 'kill them', 'kill' them. The voice did not stop and I did not know what to do! I wanted it to shut up but it would not. A terrible anger invaded me and I remembered the scoundrel who had humiliated me, who wanted to take my children away from me. I felt how all the love I had for him turned into hatred.

Without thinking about it, I took my children and dipped their little heads into the water. The children fought for their lives, they beat the water, but I kept pressing their heads until suddenly they did not move anymore.
Then I understood what I had done. The voice no longer spoke and a sharp pain, like a sword, climbed up my body and embedded itself in my chest. I had killed my children! I, their own mother, who had to take care of them and protect them, had taken their lives, I could not do it anymore, people would not understand, nobody could understand ... a mother who kills her own children! So I got into the river until the water completely covered my body and suddenly I did not feel any pain ..."

The specter finished the story and one tear after another moistened her face.

I wondered how a man could use a woman that way, I was also alarmed that a mother could murder her children, and worse, I froze at the idea of ​​how long I would have to live with the burden of such terrible pain.

La Llorona gave us one last look. She left while screaming that phrase that finished freezing our blood: "Aaaay my children". At that moment, even the air seemed saddened. The cry of La Llorona moved away from us like her, but the whistling of the wind remained like the memory of a latent misfortune that would be impossible to forget.

I hope you liked this legend. Here I show you the process of my drawing..

Thanks @surpassingoogle for all your support and for this initiative!