More than 2/3 of the current Territory of the United States, had colonies, missions or contact with the Spaniards for almost 300 years 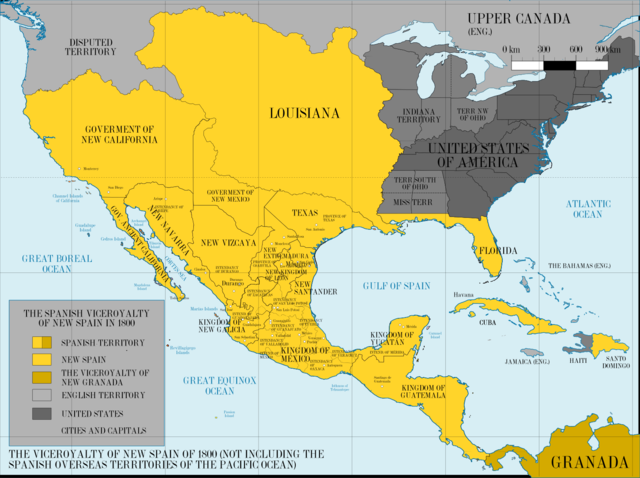 More than 2/3 of the current Territory of the United States, had colonies, missions or contact with the Spaniards for almost 300 years.

The history that is explained in the schools is partial, not everything is explained, in many cases the Hispanic is excluded, something that the educational committees themselves recognize. There is a leap in his History between the discovery of America by Colon and the creation of the first permanent English colonies.

But when the English arrived, they did not find in America the ignorance or absence of civilization as they say. At that time there was already a rich economic and cultural life.

The reality is that at that time Mexico already had a university. While in the new English colonies the houses were of wood, in the Hispanic territories already were made great constructions and buildings of stone.

There was higher education in Mexico: Colegio de la Santa Cruz de Tlatelolco (1533), Royal College of San Nicolás (1540). It is founded the University of Mexico (1551)

Although first official University created by the Spaniards was in Peru (National University Greater of San Marcos) also in 1551. And of unofficial form since 1538 worked the University of Santo Domingo.

Before the year 1600 Spain had built 7 universities throughout America.

At that time of the Revolution and War of Independence, the 13 colonies were still not much thing, neither in population nor in development.

At a cultural and social level the difference was very great, Havana had a university, seminary and theater. His social life did not have to envy the one in Europe.

On an economic level, not only were plantations famous. It had one of the largest naval shipyards in America, where ships were also guns.

In one of them, the ship Santisima Trinidad was manufactured a few years before, a fabulous ship of the Spanish navy with 135 guns, the first ship of the world with four bridges.

New Spain created a tax of aid to the independence of the 13 colonies Texas, California, Arizona, Cuba and Mexico paid the aid.

The Viceroyalty of New Spain contributed much of the aid Spain sent to the rebels.

For it was imposed a voluntary tax, but still it raised a great amount of money. With this money was paid the purchase of cannons, muskets, uniforms, medicines etc that were sent to the 13 colonies.

Even part of this money was also used to supply the French army and the French fleet that came to help the American rebels.