video: The Miracle of Community 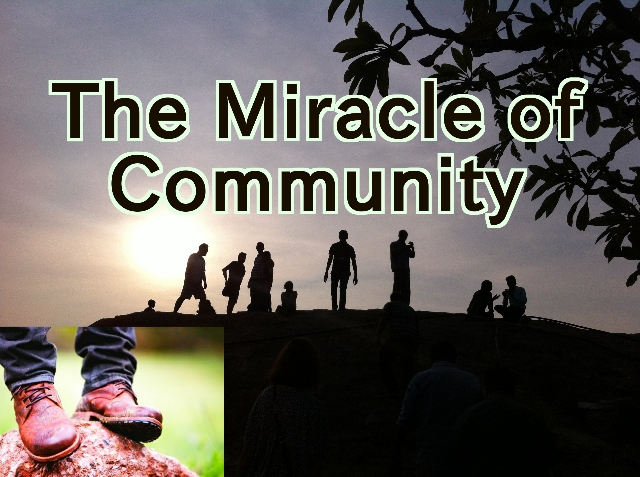 What makes human society great? Why have we been able to create miracles of invention and progress in ways no other animal or species has?

Since before the dawn of known history, we have been a species that survived in groups and tribal settings. We had to adapt shared values of living together to achieve harmony and order with one another. With the religions of old, we learned simple morals and values, that passed on from generation to generation. These shared values were instilled in children from a young age until adulthood. When collectively enforced, it greatly improved lives and made society a place where humans could grow in health, knowledge, and prosperity together.

What is a healthy community?

A healthy community is people that want to know each other. It's having neighbors that say "hello", "good morning", and maybe even chat for a minute. It's having barbeques and social events together.

It's not staying away and trying to avoid one another. It's not trying to walk by quickly and avoid making eye contact with others. When was the last time you had a meal with someone outside your family?

A healthy community is people that love and take care of each other. Just as I would come to the rescue of my blood brother in danger, so would a healthy community come to the rescue of another who is in danger. It's not abandoning them as though it were none of our concern. If I witness someone in my community break her leg, I will be there to help her, and make sure she gets the resources needed for proper healing.

A healthy community has family events, for parents and children. Parents come to socialize and exchange knowledge and stories. My brother may tell me of a problem he's been suffering with recently, and I'm able to give him some advice or help on solving the problem. While children participate in activities that help them build life skills and upstanding character.

A healthy community has forgiveness those who admit wrong doing and change their life toward good. It recognizes that people can change for the better, and is willing to give individuals a second chance. If a man has openly turned to reject evil, and we see him attempting to make amends to those he wronged, and see him living his life in the promotion of good and healthy people, then we should look to praise his change and begin forgiveness his past.

A healthy community is people being responsible and accountable to each other. It is making proper restitution for wrong doings. If I break my fellow brother's tool or device, then I should seek to make amends to him, either by repairing or replacing his device, in a proper effort to make him whole again.

A healthy community not only respects each others life and property, but will fight to help defend them. Should a thief or attacker enter my brother's home, then with courage, I will help defend my brother. Defending my brother against attackers is equivalent to defending myself.

A healthy community disciplines and reprimands each other. If my brother is behaving in bad ways, I will directly tell him, and actively help him seek to improve his life. No individual is perfect, and we all must accept correction in our lives. Also, I would discipline my brother's child, just as I would expect him to discipline mine. All children misbehave at times, but in a healthy community, they respect all the adults there.

I could go on and on about what it takes to make a healthy community, but I'd like you to think for a moment on where you live, and how it compares. In Western countries today, most communities have few of the elements listed here.

All of these must importantly come to one thing: shared morals and values. The West is in great peril because of it's moral decline. But how does a community come to have such morals and values? Well, we have to take a look at the longer history of humanity to see. So we go back, way back. All the way to the beginning of written history. The oldest deciphered texts are from the Sumerian civilization from 3400 BC. Written on clay tablets they have Hymns and Instructions with morals on to live.

Looking over history, the Persian Empire, the Mayan Empire, the Byzantine Empire, the Roman Empire, the Qing Dynasty, and Ancient Egypt. They all had a strong conviction of Religion and codified morals for society at their core. Religion has been the single bonding factor in every large successful civilization that has existed. Religion gives codified and consistent morals and values to be passed on from generation to generation.

There are only a few notable exceptions of nations that had great power without religion. Most notably Communist Nation's, such as Maoist China, and Stalinist Russia. Both ending with dead bodies that could be piled higher than a 10 story building. They intentionally and strongly suppressed religion, and never has such destruction of one's own civilization been witnessed throughout history.

It's easy to see that every individual has their own desires. Joanne has recently completed work and earned some money. Fred wants money, but he doesn't have work. What's to stop Fred from just stealing from Joanne? You could answer the law will stop him, but the law doesn't catch every criminal. When morals aren't instilled in children, dysfunction, crime, and distrust will follow. Without trust, it is impossible for a community to be prosperous or harmonious together.

Morals lead to community trust, and trust leads to harmony and prosperity. And without these religious shared morals, what is the result?

A prominent example of non-prosperous and non-harmonious community could be considered the quote "Black Community". It's so dysfunctional, that it's hardly a community at all. It's more of a political tool of the left than a real community. They don't share any codified system of values. The only consistently promoted value that can be argued for them is racial pride, AKA racial prejudice, hence the name "Black Community".

They are largely lacking religion and codified shared morals, especially in large cities. And what do we expect to be the result of this? An epidemic of single mothers. Crime and homicides in Black neighborhood's is higher than any other demographic. How can a population have growth and prosperity when they are filled with broken families and live in a constant state of distrust and fear. Gun shots firing while you sleep, and constantly looking over your shoulder not knowing if you're going to be attacked or robbed.

I recently read a story about a Black mother who was arrested for disciplining her own children after breaking into the neighbors home. This is the kind of chaos and absurdity that happens in a community lacking shared values.
https://abcnews.go.com/US/louisiana-mom-arrested-disciplining-kids-breaking-neighbors-home/story?id=40072011

Contrast this to another racial group, the Jewish Community. While Judaism has its own flaws, we must acknowledge their community's strong religious component. Codified morals and values. We can also contrast with southern Black neighborhood's that have a strong Christian presence. Crime is way, way down, and trust and community harmony are through the roof.

These are extreme examples to make the point. It is these codified shared values and morals that make it possible to have the more trusting community we all want to be a part of. Principle's of life must promote trust and harmony, for the purpose of a making a prosperous future.

In most Western countries today, children are raised far less religious than previous generations. For example, those who identify as Christian in the USA has dropped by over 10% in just the last ten years. This is leading to dire consequences for Western countries. Currently, with extreme left-wing groups like: radical feminism, BLM, and Antifa causing havoc regularly, circumstances appear to be strained quite far, but we have yet to see the worst of this storm. Economic and political turmoil are destined to break new records. We will continue to see immoral groups such as this support degenerate behavior in ways that are even more beyond belief every year.

These Egalitarians are lost, and their communities will be destroyed from the inside out. The true evil of these people is that they seek to force their corrupt and hedonistic ways onto us, our communities, and ones we love. In their absence of religious morals, they use hedonism and simple pleasure fulfillment as the lure to capture the weak among us. They use generic slogans that promote "happiness" as a virtue of life. Their degeneracy ultimately ends up in the destruction of families and communities.

The message of this recording is that we must stay vigilant, and we must organize. This is what we are working towards. The great community and great Nation. We must keep our eye on the message of hope, because we will prevail, and bring those we love with us. Avoiding indulgence can be difficult. Practice self discipline, and try to improve every day. Seek excellence, and be the best individual you can be. In the end, those who are evil breed weakness, and will destroy themselves. And our lineage will live on. Nature does not have mercy for the weak.

Christian decline in the USA.
https://www.pewforum.org/2019/10/17/in-u-s-decline-of-christianity-continues-at-rapid-pace/