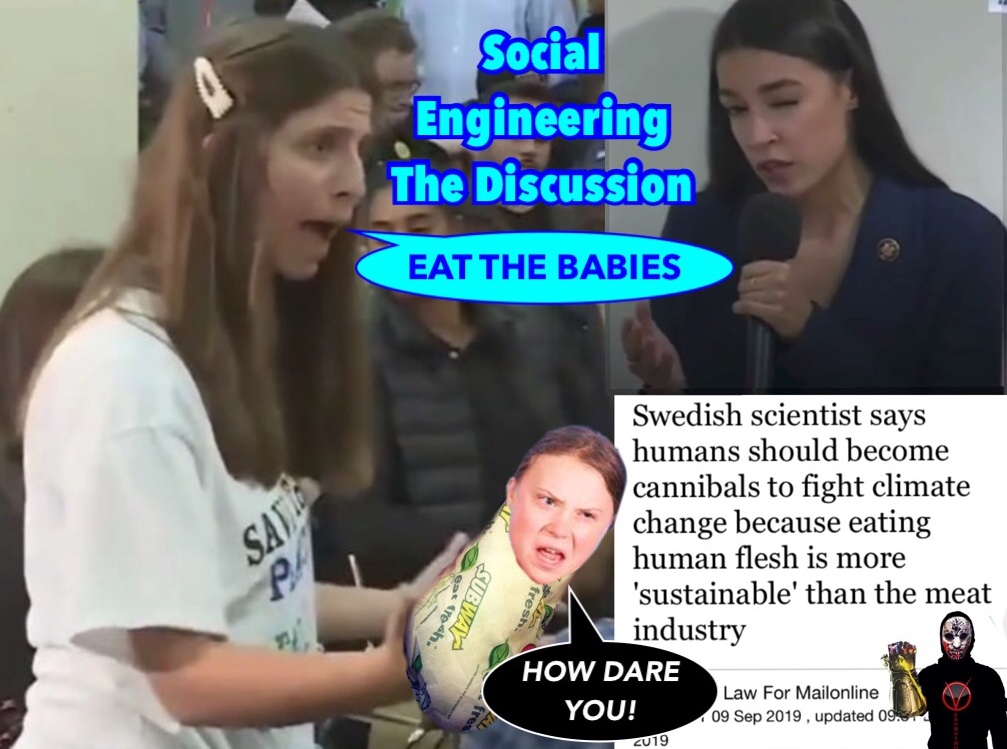 Hello dear friends. Did you see that recent stunt at an AOC town hall meeting? It’s making its rounds in the news, but here is the video of you haven’t seen it yet. ⬇️

So the story is that this was a stunt by a member of LaRouche PAC, a right-wing pro trump group.

Okay, you could go down the political route, and play it the left right game, sure. However, there just one problem with that. There is no left right. It’s a false dichotomy, both sides are working together. This stunt wasn’t just the pro trump right pranking the AOC.

Now this was a stunt to get everyone talking about eating babies to save the planet.

Watch as AOC winks at the ‘Prankster’. Was she in on it? I don’t know 🤷‍♂️ but one can speculate of course. At the very least it was interesting.

Just think about it. What was the conversation last month? Cannibalism, which started after a Swedish behavioural scientist who proposed cannibalism to fight climate change.

My friend @fakenewsreport covered this in two videos.

⬆️ The conversation on the Joe Rogan show is so choreographed, it’s pathetic.

Of course they’ve been setting this up over the last several decades via your entertainment mind control.

Got Cannibalism? How and Why it’s Being Normalized

What followed the cannibalism conversation? Well it was another Swede Greta Thunberg, telling everyone that it’s time to panic. However, Greta is an actor employed by the UN to spit their slogans of climate doom.

Don’t believe Greta is a shill for the UN? Please be sure to read the post I released a seveal days ago. It’s a real eye-opener!

So what to expect in the next week or so? Well, I guarantee there will be a slew of news articles discussing the moral dilemma of eating babies and what impacts it would have on co2 emissions if we did and blah blah. It’s the same ol modus operandi.

Create a story that sparks the conversation, then come in with the experts to push the conversation further. It all works on your subconscious. Wears people down, and reduces the shock values of the subject.

At the same time we see a big push for women’s reproductive rights (which is really a right to kill babies). Abortions are a major factor in the depopulation agenda. Planned Parenthood kills something like 350,000 thousand a year?

Massive amounts of feminist programming of women away from their natural urges towards motherhood. They make it out as something repulsive and now as something that’s destroying the climate.

Happily Ever Alone: Woman “Happiest Without Children or a Husband”

Look, as I have told people.

Do I think everyone is going to start eating babies because some experts come out and talk about the morals weighed to the benefits.

No, it’s just about bringing the idea into the conversation, and therefore into the subconscious.

It’s about wearing down the shock of such a thing.

This is how you change and twist humanity over time.

It’s not done in days, but over long time, slowly.

Just look how they’ve twisted people’s sexual identities. How they’ve confused the youth into making life altering decisions before they can even learn to read.

This wasn’t done in a day, but over several decades of programming, through the entertainment industry.

Alright, let’s wrap this up with another quote by someone else.

"No belief system, no matter how rigid, can’t be compromised. And the second that happens, everything else starts to crumble and fall." - Todd VanDerWerff ------

Thanks for stopping by and until next time.

LOL the meme of Great being eaten caught me off guard, that's pretty funny.

I missed your piece of reGreta. I'll check that out. Blog on man! (Just please don't eat babies wtaf)

That eat the babies video and the thumbnail above with the Greta Subway sandwich and AOC and that lady is brilliant.