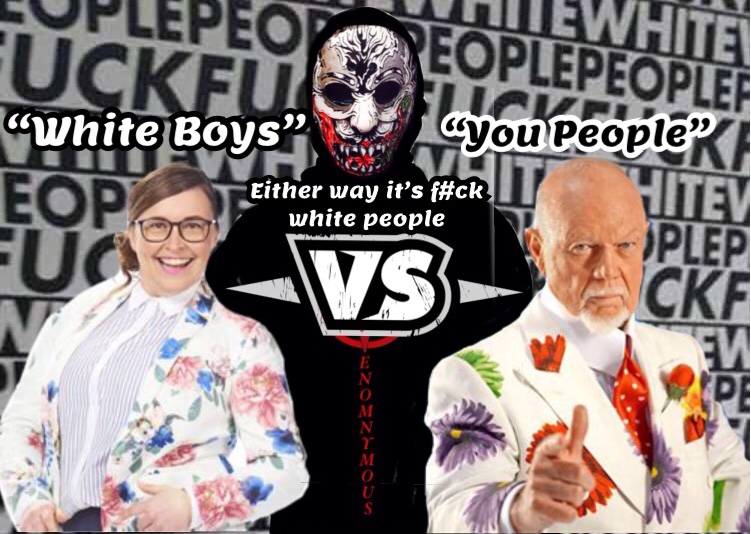 Hello dear friends. Fuck white people! Do I have your attention? lol That’s been the reoccurring theme of pretty every media covered incident for the last decade at least. It’s been longer than that, but not so brazen as it is now.

The self-loathing white person has really become a social force in society, wherein anything that can be used to self-deprecate and shit on the white race, that’s going to be the focus of course. This isn’t all by chance, it was by design.

A perfect example of the anti-white narrative happen just four days ago of November 11th, Remembrance Day. On a little show called “coaches corner” (33). Hosted by Don Cherry and his side bitch Ron McLain

I didn’t see when it aired, however apparently Don Cherry was going on about people not wearing a poppy, and he addressed them as “You People”.

Well it sparked an outrage because apparently “you people” is a racist term in 2019. Don Cherry was fired almost immediately, and it’s been an ongoing debate ever since.

There has been a lot of people who are upset over Don being fired and there are petitions and protests for his reinstatement as I write this.

I personally don’t care what he said, and I also don’t wear a poppy. Not out of disrespect for the soldiers that died, but as a disrespect to the glory of war and the mass sacrifices it created for a cause, that was completely manufactured for the sole benefits to the evils of the new world order.

The Conspiracy of WW1

Quite honestly even though he’s admitted it was a poor choice of words, and that he should have said “everybody” instead of “you people”. In this day in age of confusion, “you people” could easily be referring someone’s gender pronoun at this point. So Don should have expected as much.

So really nothing’s safe.... Except...EXCEPT, if you are flat out shitting on one ethnicity.

Can you guess which ethnicity that is?

This was evidenced quite recently on a a talk showed called “The social” (sounds like a really good show 🤮) on CTV, when some hideous creature named Jessica Allen, spoke about the Don Cherry firing.

“They all tended to be white boys who weren’t, let’s say very nice, they were not generally thoughtful, they were often bullies. Their parents were able to afford to spend $5,000 a year on hockey,” she said about the “certain type of person” that Cherry represents.

Yes, she went there. Now personally I played hockey as a kid for many years. My mom certainly didn’t pay $5000 dollars on it, We lived on welfare and I had to save up birthday money just to buy new equipment, and yes I am a white boy.

It wasn’t til later and no longer living with my hockey mom, that I stopped playing hockey altogether. This was because my dad and his wife ( that I was staying with in the city for a short time in my mid teens) wouldn’t pay for me to register or were willing to take me to the practices or games. So I basically had no choice but to move on from my dream of working my way up into a professional hockey career.

I know the chances were slim, and I certainly don’t think they were solely to blame for that being ruined for me. However, I was a pretty good player, and might I had the support to continue, there was a possibility that I could have taken it much further.

Maybe not to the professional level, but who knows? Doesn’t matter now. My point was that Jessica made a very stale ass statement about hockey, singling out what ethnicity as spoiled and rude.

How did the CBSC respond.

Shutting down people’s ability to submit a complaint just because the complaints are similar, is not a very sincere, the whole point of the council is to hear the voice of the people. But I digress.

The hose beast later goes on to ‘clarify’ her statements as her on own personal experiences.

“I was speaking about my own lived experiences, often negative experiences with those who’ve played the sport and how they’ve led to me being conflicted, really conflicted about how hockey is so closely bound to our national identity,” said Allen.“

Sounds like maybe you opened your mouth without thinking it through huh? Kinda like how Donny boy dipshit did. So why is one fired and the other not. Well, it’s because as long as you are saying things that go along with the ideologies of the political left. Everything is just peachy, cause #FuckWhitePeople

The media relentlessly mocks and criticizes white people, and Hollywood’s depicts them as idiots and violent racists.

Much Apu About Nothing: Hari the Humourless Comedian Cries "White Fragility" at Creators of The Simpsons.

That’s what it’s all about, sparking more racial division, getting everyone all up in arms on both political sides of the false dichotomy, and just let them go to town.

However, we are being wiped out of the gene pool. Whites have the lowest birth rates in most parts of the world. We have low fertility (both in males and females)

The Agenda is Working.

Happily Ever Alone: Woman “Happiest Without Children or a Husband”

That’s not to say that this isn’t happening to other races. Black people are heavily targeted by things like planned parenthood and fast food restaurants being the being the most affordable option in poor neighborhoods that are mostly inhabited by black people.

Japan, my goodness just look at Japan! Those poor bastards are dropping off the planet.

We’re dropping here too in Canada, however with the government’s ‘progressive’ stance on mass migration (legal and illegal), our steady birth decline is overshadowed by a manufactured population growth.

So it’s clear to me, that we are being ethically cleansed first and foremost due to our strong western culture that stands in the face of the one world agenda. So a big reason for the culture shift into an anti-white culture is essential for erasing that western way of thinking, and turning it into a global world view..

One of these is not like the other ones.

We are dead unless we stop taking it and start defending our way of life, our culture, our heritage. That means speaking up and pointing out this bullshit out for all to see.

Speaking truth in the face of adversity. We can all live in harmony together but no longer should we let people (I’m talking to mostly the self-loathing white folk) put us down for merely daring to exist on the same plane as everyone else.

We all belong here together, as our own separate identities. I’m an individual first, but I’m also a white boy, and it doesn’t bother me one bit that I am.

Thanks for stopping by, I hope you like what I was dishing out here. It’s not usually a topic I’d write about, however I did and I appreciate you taking the time to read it. Thanks again and until next time.

“Pi is a new digital currency being developed by a group of Stanford PhDs. For a limited time, you can join the beta to earn Pi and help grow the network. To join Pi, follow this link https://minepi.com/bitwolf and use my username (bitwolf) as your invitation code.”

Holy shit, you sure do a broadside with your posts. I have to say that I agree with you. On the Don Cherry thing, I think we should all boycott hockey night in Canuckistan until Donny boy is "unfired".

It shouldn’t be too difficult, I already don’t watch tv lol

Well look at the bright side that your hockey career didn't flourish. Your teeth are all intact therefore you can still identify as white instead of as trailer trash....because yes, they'd go there. lol.

Haha, yes this is very true!

Very well written friend! Sums up everything I have been bitching about to all the cucked half-men around me that shit themselves if they even hear the word 'racist'.