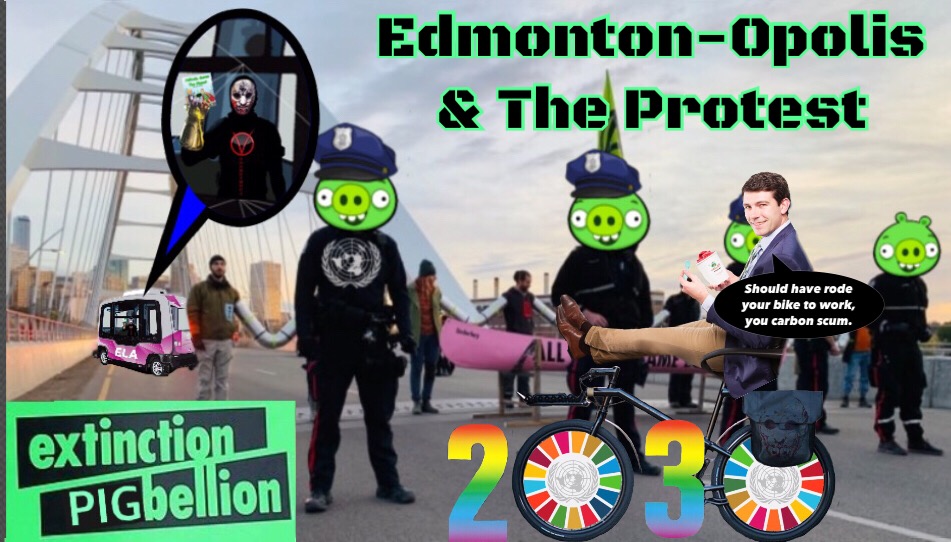 Hello dear friends I am sure by now that you have heard of Extinction Rebellion. Monday morning (33) they held a coordinated effort across Canada. The plan was to form an early morning blockade on the bridges of major cities throughout Canada and internationally.

In this post I’m just covering the one in my city. I will show you the hypocrisy, and how these protesters are just the useful idiots in the agendas of my city and ruling elite. Let’s begin!

Success! Well, yes actually. The whole purpose was to make a scene right? And with the help of the police and the media that’s exactly what happened.

“to prevent catastrophic climate (33) and ecological breakdown” haha okay yeah. Love how they parrot the lines, but there’s nothing going on upstairs.

Yeah sure the police were keeping the peace, however police were also helping to block off the bridge! I’ve been to many protests, demonstrations etc back in the day. There was only 9 people! If this was a legitimate protest, as in something that the establishment didn’t want to happen. The police would have cleared them out or at the very least open up a single lane, so traffic could funnel through.

No! They are going to line up their goons, ensuring no one makes their way through, because if there had been no police at all, the public would have moved these people out of the way within minutes.

Ahhh you see there. The mayor had foreknowledge and took his bike? Wait why did he take a bike? Was he even at the bridge? Probably not, but that’s what you should have taken instead of a vehicle and you wouldn’t have had this problem you carbon scum! Get it?

Hey, can we verify that the mayor actually rode a bike that day? Furthermore, since he was in the know about the bridge protest, why didn’t he do anything to warn commuters beforehand?

'Pedaling' an Agenda: How all bike lanes lead to Agenda 2030

Did ya? Because there’s a couple photos that show that maybe you don’t quite get what your part is.

Ooo that’s umm embarrassing. How about another? Someone made a meme.

They just jeopardized your job and livelihood and for what exactly? To pressure government into speeding up its own agenda? 😂

There’s a lot of money to be made in transforming the infrastructure to meet their net zero goals. Building the technocracy.

Furthermore carbon dioxide isn’t even a bad thing, and there’s certainly not even nearly as much co2 in the atmosphere than there was 540 million years ago and that’s when ‘scientists’ say that life exploded.

The IPCC admits they don’t have the science to predict anything in terms of future climate, that it’s all “projections and scenarios”. Meaning that when they tell you that we only have 10 years. It’s bullshit. It’s a scam they’ve been running ever since the narrative of global cooling/global warming/climate change/climate disruption/climate crisis or whatever branding you would prefer started.

It’s not really environmental climate Change, but rather it’s actually political climate that they project to change. They are reshaping the world for economical greed and control of land. This is done through the reduction, and shifting of human populations into their control grids. Their global boroughs of the new world order.

Do any of these tactics involve actually doing something positive? Doubtful, these tactics are all designed for media coverage. The action more extreme, because the stakes of climate change are so high. According to the IPCC we are running out of time right? 😉

Hey speaking of tactics, Why don’t we take a quick look at what our bike riding mayor Don Iveson is doing to tackle that nasty climate change shall we?

“We know this is ambitious, but that’s the type of leadership we need right now. While nations plan, cities take action. It’s time for cities to take the mantle of climate leadership, and employ the solutions that will provide a sustainable future for the generations to come.” said Mayor Don Iveson.

Science by consensus, because that’s what science is all about right? It’s not that the idea or the ‘theory’ is right or wrong, but how many agree that it’s right or wrong. Right Helens?

Let’s take a little peek on my cities “climate for change” webpage.

Wow, it certainly seems like Edmonton and the mayor ol Donnie boy, really feel strongly about climate change and mitigating CO2 emissions. Would it really surprise you that they would allow extinction rebellion to have their stupid protest and disrupt hundreds of commuters. Those nasty, evil motorists in their personal vehicles, spewing pollution into the atmosphere.

How dare you! Right Greta?

I call it as such because my city is balls deep into UN agenda 2030, and is working hard to transition our transportation system. They desperately want people out of their personal vehicles and onto bikes, e-bikes or e-scooters, car-sharing or using public transportation. You can also go with an electric car, however that’s a personal vehicle and not only will become autonomous in the future, but service based only. Meaning you won’t be able to buy cars, but rather subscribe to a car dealership which will then lend you a vehicle to use for your commute.

Isn’t it cute? It’s the future of public transportation. My city tested this autonomous shuttle bus around this time last year. You can bet this thing or something like it will be in your city too.

Alright, back to the article to finish this post off.

Who is Extinction Rebellion? And who funds them? Some guy made a video on the founders and their ties to the telecommunication industry. The same industry responsible for the deployment of 5G

Well that’s the end of this article, but you don’t have to stop here (oh no!). I have many posts on the climate change propaganda that you can read in the “related posts” section that I will include below.

Thanks so much for stopping by and until next time.

(in no particular order)

CONserve-Nation: CPAWS Wants 50% of Canada Locked Up In Conservation

Welcome to your Agenda 2030 Future: Ireland Succumbs to The Pressure From Carbon-Obsessed Climate Eugenicists

A Global Diet Is Coming.

The Polar Bears Strike Back: The Climate Change Narrative Unravels

I love your work. I subscribed to you on Bitchute.

Thanks! I appreciate that very much. 😃

I never knew you had a bitchute channel - I'll go subscribe now!

Right on, thanks! I’m planning on posting more videos in the near future.

No problem - I'm making a (humorous ) dtube vid right now - I'll give you a funny plug/write up, in it.

I'll drop the link when its done (a few hours yet).

lol nice. Yes definitely! Link it when you’re done and I’ll check it out!

I never got to finish the video, sorry about that- but you are on the back burner, so to speak!

By the time I'd finished writing all the material for the vid - I ran out of time! So I just posted instead.

Oh lol no worries. I’ll check your post in a little bit. Give my VP some time to recover before I upvote

People had similar problems with government, with King George, with police, with the tyranny, in the 1700's. So, they ran off and created the United States of America. But they to fight for it. I've never seen police block roads before. Wow.

It was 9 protesters. The police helped Their shitty protest when they could have helped everyone by opening up a lane.

Point of the post was that they the fake rebellion and that it’s all been manufactured to protest for the government. It’s the government’s propaganda and they fell for it to the tee.