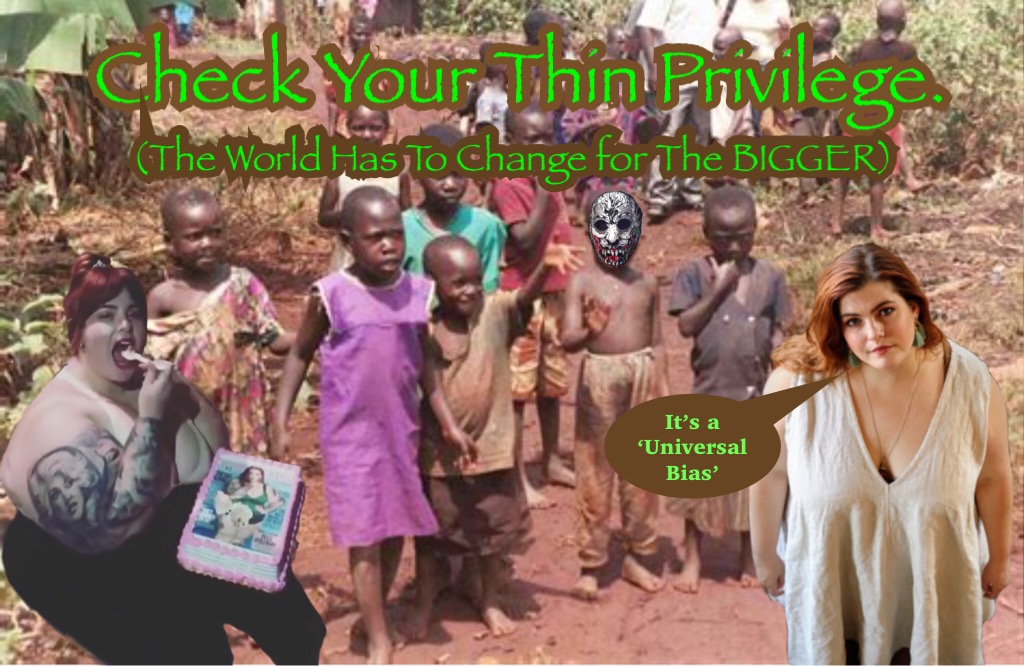 Hello dear friends! Hope you had a great weekend, and a great thanksgiving for my fellow Canadians. Hope you didn’t stuff yourself too much at your turkey (or what have you) dinner. Hopefully you are someone with self-control when you eat, because the lady in the article I’m about to address, certainly does not.

I agree, that must be really awful. I know I wouldn’t want to be in that situation. Please continue.

Lmao “too fat to accept” sorry I couldn’t help it. However, you have to understand that it’s not that you are extremely fat. It’s because it’s a matter of production costs. They are not going to spend a ton more on extra materials to make sizes that don’t carry much demand. I’m sure that if you inquired, you could get a custom size made for you. This would make it worth the manufacturer’s time and money.

Also consider the fact that most double plus obese people aren’t very happy nor very interested in dressing up as you are, Marielle. You are an exception to the rule. Whether it’s because you are mentally ill or just a flat out shill (or both), what you are pushing here is evil, dishonest propaganda.

WHAT? Okay so before I tell you to take responsibility for your own health. I need to realize that most people are Fat, but at the same time there’s a universal bias against fat people? Is it fat on fat hate? This makes no sense.

How about you check your privilege in eat excessively while others starve? Your privilege to hold up a line at the medical office for problems that could be avoided, if you didn’t sit on the sofa eating junk food, stuffing in your problems, complaining “why don’t they accept me?”

No, let’s transform the entire world to accommodate your size, to what end I ask? To what end?

However, I’ll agree with you on one thing, the system has failed you, it’s failed everyone. It has failed you because instead of promoting healthy living, social media (the propaganda hub of billionaire eugenicists) push the body acceptance agenda, and you eat it up (no pun intended).

All the popular YouTubers are always promoting the most awful foods on their channels. This is because they want everyone to be fat marshmallowy people. They want you mentally ill, and thinking that you are the greatest thing ever for it.

Fat is beautiful, just as vulnerability is strength right? It’s the inversion of society. They are flipping everything upside down, It’s sick.

What do you want? I already explained how you are literally taking seats from people on plans. Do you think anyone is actually comfortable on a plane seat? I’m 6’1, do you think I’m comfortable on a plane? No. Should they take out a whole row of seats, so I have leg room. No. So why should there be special priority for you because you don’t practise any discipline with your health?

Fit in university seats? I mean what do you expect them to do? Put in sofas? That’s gonna cost more, who’s gonna pay for that? Don’t even get me started in on the whole medical bias bs. I’ve destroyed that fiction, three times.

Dad Bods: The Sexy Physique of The NWO.

Wow, how very privileged of you to be able to have a voice at such a venue.

Well of course, these people are vulnerable and easily swayed by a figure similar to theirs, saying all the things that they want to hear. Which is that you are not the problem, you’re a victim, you’re the greatest, and it’s the world that’s the problem.

Yes, your fat excludes you from participating in the simplest of activities. It’s because you treat your body like a garbage disposal. That’s going to have some very negative consequences for your health and ability to participate.

However, it doesn’t have to be that way. There’s help around if you seek it out.

No, it doesn’t! There’s no universal bias. It’s your own bias against yourself. It’s you that’s removing yourself because of your own feelings of inadequacy.

Take the woman with the donkey riding friend. You think your friend doesn’t know that you are overweight? She’s still your friend. Your weight isn’t an issue for other people. However, instead of saying “I’m too heavy to ride the donkey” you said “I am too afraid to ride the donkey.” Trading one inadequacy for one that you are more comfortable with. THAT’S YOU! Not the ‘universal bias’.

You are all accepted and worthy, you’re just not healthy, and changing the world to step around your problem is not a solution. It will only make the problem worse.

Telling is that we need go beyond to accommodate you. Well, that’s where you are going to find some resistance, at least from people who still have the ability to think critically.

“Social change can take decades”. Yeah, or you could work on bettering your health, which could take only year or so, depending on how motivated you are.

End the marginalization of bodies? Who’s marginalizing you? The doorway? You’re not marginalized, you’re literally allowed to come and go as you please anywhere. Show me the “no fats allowed” sign anywhere in our city.

There are none, the only limitation is the one you’ve placed on yourself, with your dietary choices, and lack of physical activity.

That’s the end of the article. There was an article previously written about Marielle that had a couple parts I wanted to address and that’ll be it.

You can find clothes that fit you in some way. However, you’re talking about fashionable and pricier attire. That’s not a human right, that’s a privilege. Privilege that you can earn through hard work, both with earnings financially. However, like I said before. Stores or boutiques are not going to risk making products in sizes that don’t meet the demand. It’s just basic business.

Well here we are, two articles down. Marielle Terhart, could she be the Canadian version of America’s Tess Holiday?

“Holliday also self-describes as a "body positive activist".[18][20] She embraces the word 'fat' and advocates that people should be able to eat as much and whatever they want without suffering from social ostracism.[4] In 2013, she started her #effyourbeautystandards movement on Instagram.” - wikipedia

What a great woman. Real pretty face, unusually skinny in proportion to the rest of her body (some suggest she had liposuction on her face). She’s certainly has a great message for all those who suffer from obesity. A real ‘positive’ message.

Why are they creating a society of marshmallow people?

Well, what is a marshmallow? A soft puffy mass, pervious to harm and in need of protection. That’s the type of human that will beg for their government to step in rather than take charge of their own domain.

Do you understand what I’m saying?

Anyways, that will do it for now. I’d say this is my last post on the fat agenda. However, knowing me, it won’t! 😆 Thanks so much for stopping by and until next time.

Other ways you can interact with m me.

You always do such a thorough job and spend a ton of time and effort on your posts. Great job here. Nailed it as always. This lady is ridiculous. Well done @venomnymous.

Thank you kindly. I just try to do my best.

Great job dude.
These fat fuckers need to stop dodging the salad and get on a fucking treadmill.
Why should the rest of the world have to change to compensate for their gluttony?!
👊😎