The Third and Last Bulgarian Kingdom 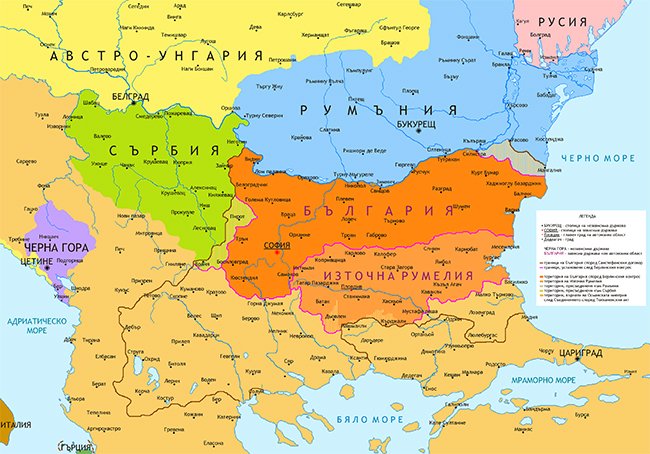 The third Bulgarian kingdom formally began on March 3, 1878 after the signing of the preliminary San Stefan Peace Treaty between the Russian Empire and the Ottoman Empire, which put an end to the Russo-Turkish War (1877 - 1878). According to this agreement, the Bulgarian state of the Principality of Bulgaria was created, whose territory covered lands with the Bulgarian population from the Black Sea to Lake Ohrid and from the Danube to the Aegean. The great forces, which were worried about the increasing Russian influence in the Balkans, held the Berlin Congress in July 1878, at which they revised the San Stefano Peace Treaty and concluded another, final, under the name of the Berlin Treaty (July 13, 1878).

Under the Berlin Treaty, the Bulgarian Principality received land between the Danube and the Stara Planina Mountain. The territory beyond the Old Planna until the Rhodope remained behind Turkey, and was called East Rumelia with the administrative center in Plovdiv.

Bulgaria after the Berlin Congress

Of course, Bulgaria was not satisfied with its vassal position and the loss of its ancestral territories, but then nothing could be done - the Great Forces decided so.

Only in September 1885, Bulgaria was able to reunite with Eastern Rumelia, and on September 22, 1908 received legal independence from the Ottoman Empire and became a kingdom. Until that moment, the Bulgarian rulers were called princes.

In September 1946, Bulgaria became a republic and the monarchy was abolished. The third Bulgarian kingdom was the shortest in the history of Bulgaria - only 68 years old, and legally even less - 38.

Here, I ask readers to forgive me for this “unification” of the legal statuses of the principality and kingdom into just one Kingdom, because I describe one period of the Bulgarian state in which monarchs - princes and kings ruled

1.Another time during the Russo-Turkish War, a temporary Russian administration of the Bulgarian lands was formed, and in May 1878, Prince Alexander Dondukov-Korsakov was appointed Russian imperial commissioner in Bulgaria.

On April 2.16, 1879, the constitutional monarchy was adopted, and on April 17, the Great National Assembly, at the suggestion of the Russian emperor, elected Bulgarian prince Alexander Battenberg, the nephew of Empress Maria Alexandrovna, wife of Alexander II.

Alexander I Battenberg became a prince at the age of 22. Prior to that, he was a volunteer in the Russo-Turkish War of Liberation. He ruled the Principality of Bulgaria from 1879 to 1886, when a conspiracy was committed against him and a coup d'etat took place. It was in his reign that the unification of Bulgaria with Eastern Rumelia happened, which is now celebrated as a holiday of Unification. The Russian Empire was not interested in this far from a diplomatic demarche against the Ottoman Empire, and it is generally believed that this served as the reason for the overthrow of Battenberg a year later.

5.Ferdinand I abdicated the Bulgarian throne in favor of his son Boris after his defeat in World War I in 1918. Boris III ruled 24 years, until his death in August 1943. This ruler in the Third Bulgarian Kingdom got the most - most of all difficulties and problems, but also more than all glory and popular love. There are still rumors that Hitler poisoned Tsar Boris III.

He returned to Bulgaria with the fall of socialism - in 1996. From 2001 to 2005, Simeon Saxe-Coburg-Gotha led the government of Bulgaria as the Prime Minister, and also founded the National Movement Simeon II, which was later renamed the Stability and Sunrise Movement (VATN). Now he no longer leads this party, but he still lives on and is rumored to live in the palace of Vran near Sofia.

After the coup on September 9, 1944 and the abolition of the monarchy in 1946, Bulgaria fell under Soviet influence and the Communist Party led by Georgy Dimitrov came to power in the country.

"Great powers" is a term used in Bulgaria after the Vienna Congress of 1815. For Bulgaria, at the end of the 19th century Great Britain, Austria-Hungary, France, Germany, Italy and Russia were Great Forces.

Hiya, @lizanomadsoul here, just swinging by to let you know that this post made into our Honorable Mentions in Daily Travel Digest #657.