Sozopol - view from the sea 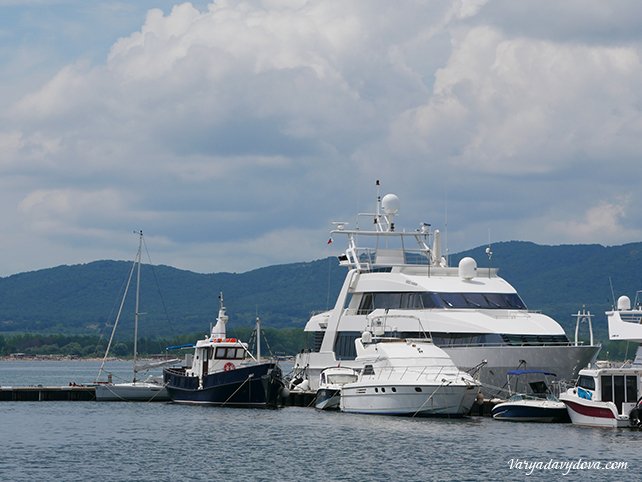 Sozopol must be pronounced without a soft sign - this is its true name. The soft sign is the Russian version.
Sozopol, like all ancient cities, consists of the old and new parts.

The city is very interesting, attractive with a rich history (from the 5th century BC) and is one of the most pleasant resorts in terms of climate, nature and pricing. And also because of its excellent location: 35 km south of Burgas, that is, from the airport in Sarafovo. It seems not far, but at the same time not as close as Sunny Beach and therefore there are much fewer tourists, therefore more comfortable.

This is the Skamniy Peninsula, on which the old town of Sozopol is located. By the way, Skumniy is connected with the island of St. Kirik by an earthen embankment, so many people think that the Admiralty is on the continuation of Scumnia, but this is not so. You can’t get into the Admiralty for a long time - there are excavations going on.

Despite the fact that Sozopol is considered a rather hot region in Bulgaria, the climate here is temperate continental and average temperatures in the summer are + 27 ° C, and in the winter + 6 ° C.

Almost all architectural monuments belong to the period of 18-19 centuries, with the exception of excavated tombs.
White buoys is a mussel farm. But locals say that now they can’t be eaten - the sunken ship began to let fuel oil.

By the way, Sozopol is larger than Nessebar - the same ancient city on the island, but located close to the Sunny Beach resort.

Since there are no large and populated resorts near Sozopol, the people here seem smaller and it’s nice. According to the census, only 4,317 people live in Sozopol. However, I think that the census does not take into account foreign property owners who live there for six months.

All photos were taken on my new Panasonic Lumix camera in a special mode.

With love from Bulgaria @varya-davydova