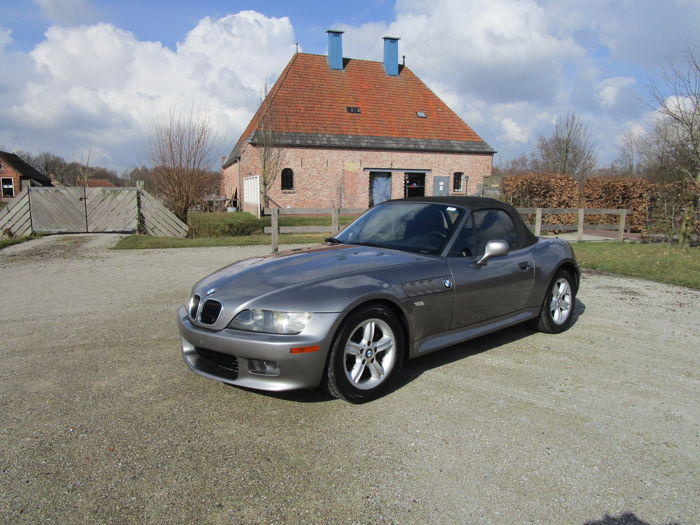 April 1994: BMW announces that its new plant in Spartanburg (USA) will produce a roadster. January 1996: The Z3 will be presented at the Detroit Motor Show - with 115 hp, 8V and 140 hp 16V engines from the 3 Series. 1997: The 2.8-liter straight-six is handed in later. Optical distinguishing feature is a new front apron and a widened tail. In the same year BMW presents the M Roadster with 321 hp. 1998: The coupe is introduced; it's more expensive than the Roadster and only with big six-cylinders. April 1999: The facelift gets the rear L-taillights, interior and top are revised, new engines are pulling in (2.0, later 2.2, 3.0). June 2002: After a total of almost 300,000 copies, the production of the successful model ends. The roadster boom went 1996 in the second round. BMW, Porsche and Mercedes followed the makers of the Mazda MX-5 and seven years late showed their interpretations of the modern roadster. From 45,000 Marks there were BMW open two-seaters at the dealerships initially only after two years waiting time!
Nimble changes of direction are the parade discipline of the Z3, not impressive longitudinal dynamics, initially the Roadster was so driven exclusively by small-volume four-cylinder. There was not enough space for a six-cylinder, claimed BMW at the time. Until the civilian sixinline of 3 and 5series found their way under the long hood of the Z3, later even the 3.2-liter six-pack of the M3. But to be happy, it does not take such a testosterone-powered speed junkie. The early four-cylinder Z3 with its narrow-gauge look radiates a charming innocence, as if to say: I'm just kidding. With this character, the Z3 is much more akin to a MX-5 than a SLK or Boxster. Just a bit more provisional, a bit less complicated and even a bit British. Piled side lines, behind which can breathe hypothermic artifacts as in SLK or Boxster, offers the Z3 not. The wind blows on the pilot like in a biplane plane. Combat aircraft bores the Z3 not with safety-oriented driving behavior, but he delights with jagged steering and lively rear. Sterile perfection does not suit him: on bad slopes, the Bayer from America ever shakes, and the soft top sometimes does not take its function seriously. Features that do not stand out in a quirky '60s roadster, but worth mentioning on such a young car. Cuddly heating and reasonable rust prevention but allow anyone who still dominate the rear-wheel drive without ESP, repentance less low-level flights under the winter sun. The driving pleasure is therefore also on cold, salty days in our latitudes nothing in the way.
Wiggling seat frames, stiff windows, leaking tops: The Z3 was initially not as carefully assembled as regular customers of products from BMW were used to. Many quirks have been fixed by the manufacturer during the construction period. Nevertheless, a degree of capacity for suffering is helpful if a summer affair is to become a lasting relationship. The Z3 is in its deep interior a 90s-3 Series E36, whose axle problems he has taken over the same. Longer-term relief creates high-quality spare parts from the free trade. Apart from the long list of small quirks, there are no substantial problems. The motors are maintenance-free, with the exception of the M versions, thanks to the timing chain and long intervals, the drive components are robust, and the sheet is effectively protected against corrosion.
The Z3 was in production until 2002. The spareparts offer prepares no problems. Thanks to the common-part principle, one can fall back on a wide range of E36 parts. Only with exotic interior colors can it be tight.
The price range is huge. From the exhausted four-cylinder roadster for 4000 euros to the late M Coupe for over 25,000 euros, the Z3 range. Well 6000 euros should be calculated for a useful early copy.
Still there are checkbook maintained Z3 in prospect condition to small money still. Because with the sharply lower used car prices, the proportion of traded tuning victims is increasing rapidly. This fate unites most models from BMW. Then the original copies are rare - and their performance reverses to the opposite. A cultivated, early Z3 can therefore be considered almost as an investment. The M Roadster and the rare M Coupés enjoy a special status: real driving machines that demand a knowledgeable hand and enough money in the wallet.