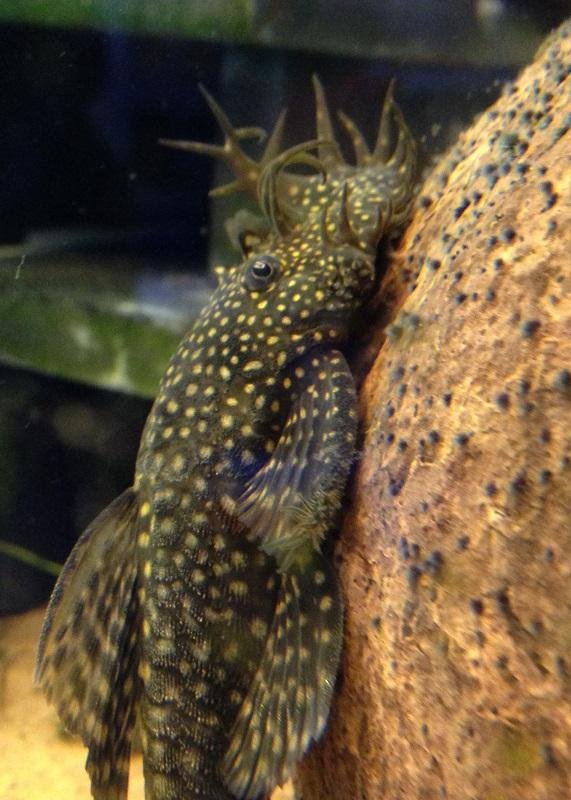 I have been very fascinated with fishkeeping lately, as some of you have might seen from the few posts I have been publishing in the last six months. One particular thing that I find very interesting about it is how I can apply my knowledge from ecology and biology into the hobby, and using theories to explain a lot of behavioral, morphological, or genetic differences that we see in the trade.

I’m going to be talking a bit about how we have been using selective breeding to create several different color morphs of one of the most common catfishes to keep in the aquarium in the post. We will be looking at the Bristlenose Pleco as you seem to refer to it in the US, or Ancistrus sp. as we typically call it in other parts of the world (which also happens to be its scientific name).

Which species is really Ancistrus sp.?

Firstly, let me start off by saying that Ancistrus sp. is not even a real species. It is (most likely) a mix of several different species from the Ancistrus genus, all found in the Amazon in South America. By looking at the morphology alone, we can assume that one of the species used to create this hybrid species is Ancistrus cirrhosus, which is why some people like to call it Ancistrus cf. cirrhosus, literally meaning “Ancistrus compare to species cirrhosus”.

The reason why no one knows the exact species is because it was imported from South America many decades age, and has since been kept with other Ancistrus species. The problem with this is that they can all interbreed, so it seems extremely likely that this fish is a big genetic mix. However, it extremely versatile, surviving almost everything, while at the same time being great at eating algae, which is why everyone want to keep it in their aquarium despite it being a hybrid species mix.

Several different genetic morphs have been found in this fish over the years. A lot of these have randomly appeared due to the fact that thousands of people are breeding these, and color morphs are very easily distinguished from the regular fish. A somewhat common color morph is the calico morph. This is simply a genetic variation where the fish gets certain orange colored pigmentation spots on its body.

And now for the selective breeding. Get two of these Ancistrus sp. “calico” together and breed them to get offspring that is also born with the same genetic deficiency. Select a group of these that have the most orange spots and breed them again. Keep doing this by selecting the most orange fish until you get a result like this:

These guys are now beginning to be very popular in the aquarium trade, and are usually called Ancistrus sp. “super rot” where “rot” is german for red. As you can expect from the name, this color morph originated in Germany.

If these guys are bred, all the offspring will look pretty much just like them, making them a somewhat pure orange strain of Ancistrus sp. catfish.

Another color morph is called Ancistrus sp. L144, and this color morph is bright yellow. This fish has a totally unknown origin, with a lot of mystery surrounding it. The first examples that showed up for sale claimed it was found like this in the wild, but 40 years later no one has been able to find one in the wild. Pretty much everything except for the color is the same as with the regular Ancistrus sp., so most people assume that it’s also a genetic color variation of the pleco we all know and love.

The strange part is that no one seem to have been able to make new individuals with the color morph, which either means that the breeder that originally made them used some sort of other species to crossbreed them with, or had a huge stroke of luck and got a super rare mutation. Hopefully we will learn the truth at one point in the future.

Other color variations of the Ancistrus sp. catfish

The problems when we want to combine science and a hobby

One thing that I find extremely difficult when trying to combine my hobby while also being a biologist is the lack of any real sources for information about fish species. How can i trust what I read? I really can’t. And most species have only had a very limited interaction with the scientific community (with some notable exceptions). So this post won’t have a list of scientific articles like I would prefer to have, but rather some other sources that kind of backs up my claims. It’s very difficult to know exactly what is true and what is not when a lot of the information about the fish is posted on random websites with no sources, is simply passed from one person to another, or is based on my own observations when breeding these guys.

This is also the reason why we have species like the Ancistrus sp. that seem to be a genetic mix of at least 2 or 3 different species. Few people in the fishkeeping hobby is trained to tell species apart from each other, and even fewer people are keeping records of which species are being hybridized before being sold.

I tagged this post as #science despite not having the species information backed up by science. Right now, we simply don’t have any real scientific evidence to tell us one way or another. However, I still used the tag since a lot of information here is based on taxonomic and genetic theories.

Some of the sources I did use for this was a great blog post by Ron Bows. He really knows his Ancistrus sp. catfish, and have a big list of photos of all the different color variations we have in the hobby.

Hey @valth! I am not a big fan of human interference with nature but this is a very interesting article and I am happy to see you posting again after some time :) Let me get you some extra support from TipU:

Great post.
First i see about aquarium fish... Love it. Been keeping and breeding ancistrus sp. For years.. And also L144.
My favourite kept catfish is stil L025.

I will make a post about my fishes very soon

Welcome back and right on cue. We need good stuff to read !
Not sure how I feel about selective breeding, especially when it's purely for aesthetics but as usual you could make cow shit sound interesting !

Best wishes and I hope family and whippet are all doing well :-)

Is this an expensive hobby?

Once you have the tank, it's affordable!

These kind of catfish are quite easy to maintain!

Your post was upvoted by @steem-ua, new Steem dApp, using UserAuthority for algorithmic post curation!
Your UA account score is currently 5.265 which ranks you at #826 across all Steem accounts.
Your rank has not changed in the last three days.

In our last Algorithmic Curation Round, consisting of 111 contributions, your post is ranked at #86.

Nice post, I also have them in my fish tank!

For higher upvotes I recommend some references, next time!

Hi, thanks for the post! I have included it in my daily Science and technology digest, and you'll receive a 10% share of that post's rewards.

I reckon that the most scientifically appropriate statement when confronted with limited evidence is 'I don't know'.