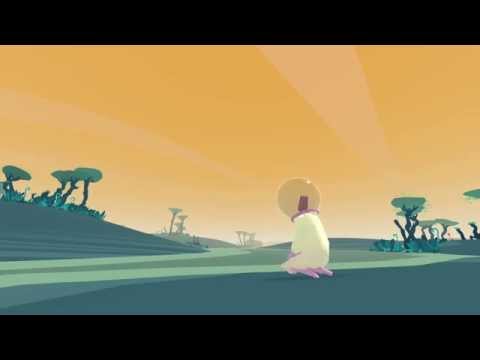 This article is a linear description of personal experience and contains a spoiler, since without it such a text will be impossible.

An astronaut is standing in front of his crashed spaceship. It is becoming clear that there is not much time left to live because the oxygen will end any second now. Something needs to be done immediately. But there are no instructions given to the player. The first instinctual automatic reaction - following the same familiar plot of any survival game. According to the rules of those you need to explore the territory, search for rescue resources (such as craft tools, weapons,shelter) and survive as long as possible.

The player starts the quest. Endless desert landscape lasts without leaving any hope. Before finally… you face the little island = transmundane oasis. For some odd reason, you can’t detect any gameobject, medicine or any character to interact with. Somewhere far away is another identical oasis-island on the horizon. The player moves towards that one with strong aspiration to find survival resources. On his way he sees here and there bodies of astronauts || exact copies of him || lifelessly resting on the surface of the desert.

The soundtrack by Marskye becomes a dialog in between you and the flesh of alien planet where he landed. The music blows the suspense atmosphere up, as slow as the oxygen level is dropping down. The player comes to the next island but does not find anything that could risque him. Tiny stripe of oxygen shows 0% and... GAME OVER. What was that? What are the rules you need to follow?

You change your strategy when beginning a new game. Inconsistently undertaking all the possible actions to risque yourself, you suddenly find the option which was missing before: take the skafandr off….. Literally means: SUICIDE. And this is the only solution.

An extraterrestrial garden arises on the spot where you voluntary leave the game. Another player will come here in search of salvation and sooner or later become a part of this computer game. Forever.

Orchids to Dusk made by Pol Clarissou is a networked game which is hard to call (“Game”) in the conventional sense. Simple challenge, which seems to be so natural at the beginning becoming a waste of time, when you perceive the real mission of yourself. That mission has no connection with personal player’s experience. Your player skills turn out to be useless, when you see that solely by refusing from player’s ambitions you can win something real. You are simply germinating as a tree in the digital desert, where many loners || as you are || wander looking for contentment. Simply relinquishing all the obligations to fulfill any plans. Simply being a part of that world where there are no names and ranks. Simply being one of the organs of this gigantic body.