Brexit: 'Strong possibility' of no trade deal with EU - PM 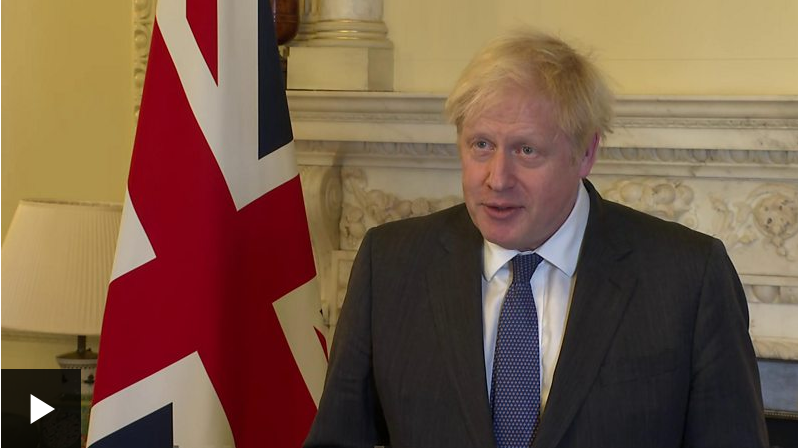 Boris Johnson says there is a "strong possibility" the UK will fail to strike a post-Brexit trade deal with the EU.

Speaking for the first time since a crunch meeting in Brussels, the PM said "now is the time" for firms and people to prepare for a no deal outcome.

Talks continue between the two sides, but Mr Johnson said they were "not yet there at all" in securing a deal.

Time is running out to reach an agreement before the UK stops following EU trade rules on 31 December.

Weeks of intensive talks between officials have failed to overcome obstacles in key areas, including competition rules and fishing rights.

What happens if there's no trade deal?
What are the sticking points in Brexit trade talks?
Brexit trade deal now looking remote
Mr Johnson pledged British negotiators, who earlier resumed talks with their EU counterparts in Brussels, would "go the extra mile" to reach a deal.

But he said the EU wanted to keep the UK "locked" into its legal system, or face punishments such as taxes on imports, which had "made things much more difficult".

The PM added that the EU's proposals would mean, despite leaving the bloc earlier this year, the UK would be forced to remain a "twin" of the 27-country organisation.

"At the moment, I have to tell you in all candour, the treaty is not there yet and that was the strong view of our cabinet," he said.

But Mr Johnson said that "looking at where we are," it was vital the UK prepares for the "Australian-style option" of not having a free trade deal with the EU.

2px presentational grey line
Analysis box by Laura Kuenssberg, political editor
Will there be no deal? Right now it is just too hard to say.

But is Boris Johnson only trying to send messages to his opposite numbers? The answer is no.

On Wednesday we saw this whole saga move closer to what both sides would consider a failure - an inability to agree on a trade deal that had been in reach and is still in their mutual interest.

It may yet come to pass that the prime minster or the EU leadership will have a change of heart.

Of course the rhetoric does not tell us everything that's going on.

But the PM's warning tonight is far from just a message designed to be heard in EU capitals - whatever the merits of the decision he may take, Downing Street is preparing the ground for a choice to leave the status quo without firm arrangements in place.

2px presentational grey line
Australia is negotiating a free trade deal with the EU but currently does not have one and largely does business with the EU on World Trade Organization (WTO) rules.

Moving to WTO rules on 31 December could result in tariffs being imposed leading to higher prices for the goods the UK buys and sells from and to the EU, among other changes.

Canada finalised a deal with the EU in 2017.

Mr Johnson said he "tried very hard to make progress" at his dinner with Mrs von der Leyen, but the EU was making things "unnecessarily difficult".

2px presentational grey line
Analysis box by Jonathan Blake, political correspondent
Repeating his words for emphasis, the prime minister could not have been clearer.

Boris Johnson has given the strongest signal yet that he sees a no-deal situation as the most likely outcome from talks with the EU.

That may be a "strong possibility," but still he said the UK would do everything it could to reach an agreement.

He also raised the prospect of talks with other European leaders to unlock the process. Could trips to Paris or Berlin be on the cards?

A senior Downing street source indicated the UK had offered new ideas on how to move talks forward at the dinner in Brussels on Wednesday night but they were met with a neutral response.

While Sunday has been agreed as a deadline, both sides seem willing to allow the process to go beyond that if progress has been made.

2px presentational grey line
Meanwhile, the EU has set out the contingency measures it would take in the event of no trade agreement being reached with the UK.

The plans aim to ensure that UK and EU air and road connections still run after the post-Brexit transition period ends on 31 December.

They also allow the possibility of fishing access to each other's waters for up to a year, or until an agreement is reached.

2px presentational grey line
Brexit - The basics
Brexit happened but rules didn't change at once: The UK left the European Union on 31 January 2020, but leaders needed time to negotiate a deal for life afterwards - they got 11 months.
Talks are happening: The UK and the EU have until 31 December 2020 to agree a trade deal as well as other things, such as fishing rights.
If there is no deal: Border checks and taxes will be introduced for goods travelling between the UK and the EU. But deal or no deal, we will still see changes.
2px presentational grey line
'Balance of fairness'
Earlier, Foreign Secretary Dominic Raab said it was "unlikely" the negotiations would be extended beyond Sunday, when the two sides have promised a final decision.

Meanwhile, EU leaders are also meeting in the Belgian capital for a two day-summit of their own, although Brexit will not be the main focus of their discussions.

Arriving at the summit, Mrs von der Leyen said the conditions for a trade deal would have to be "fair for our workers and our companies."

"This fine balance of fairness has not been achieved so far," she said, adding that a decision would be taken on Sunday.

media captionSir Keir Starmer tells Boris Johnson to “get the deal” and his party will then look at it.
Before the PM's remarks, Labour leader Sir Keir Starmer urged Mr Johnson to "get on and deliver" a deal, adding the outstanding issues "are capable of resolution".

Asked whether his party would back a deal in a vote in the Commons, he said: "We will look at it - and we will act in the national interest."