Bhangarh Fort : the most haunted Fort in India 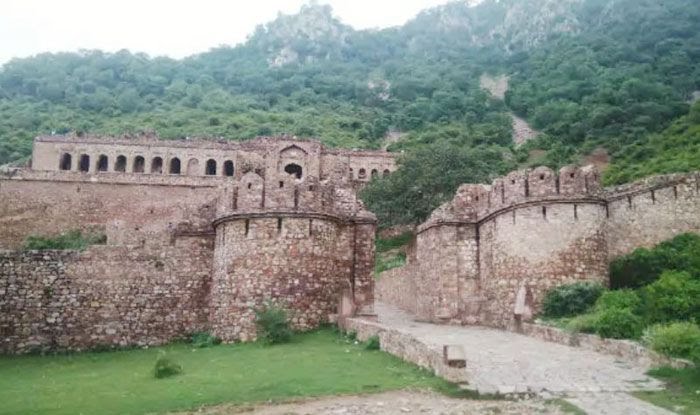 How many of us believe in ghosts? Do they actually exist? Can they be felt? Believers will reply in affirmative and non believers will perish the thought. However, whether they be a believer or not, everyone would like to take a trip to the Bhangarh Fort, located at the border of the Sarika Tiger Reserve in the Alwar district of Rajasthan.

The fort as they say is not meant for the faint hearted. There are many stories which tell us the reasons for the fort being cursed. The Bhangarh Fort in Rajasthan was built by King Madho Singh, the younger brother emperor Akbar's general called Man Singh. It was built after getting approval from ascetic guru Balu Nath who meditayed at this place. According to common folkfore, the ascetic made the king swear that the fort's shadows would not touch his area of meditation. But the king failed to keep his promise. As soon as the shadows touched his spot, the guru cursed the village to remain roofless. Evem if a roof is built today, it collapses soon after.

Another story is about tantrik Singhia who fell in love with Princess Ratnavati. He tried to use magic to win over her but the princess knew of his evil plans and ordered him to get killed. Before the tantrik died, he too cursed the residents of the fort to die and the village dwellers to remain roofless forever.

Well if you are wondering that it's all fake, then you might want to know this that the Archaelogical Survey of India itself forbids locals and visitors from hanging around the vicinity of the fort once the sun sets. The warnings about legal actions are not merely out of rumours. People claim to have heard Bhangarh ghosts scream, voices of women crying, sounds of bangles in the rooms, and eerie smells after dusk. Ghostly shadows, strange lights and unusual sounds of music and dance have also been spotted. The brave hearts who dared to stay back after dusk have failed to appear alive the next morning.