THE STORY OF YOUTH FOOTWAY FROM INDONESIA TO MEKAH 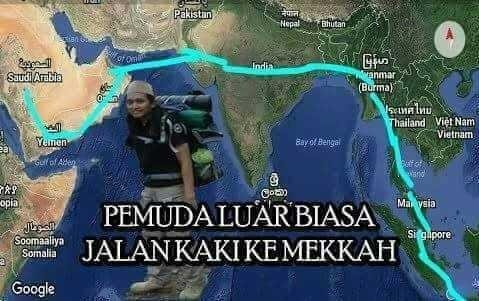 THE STORY OF YOUTH FOOTWAY FROM INDONESIA TO MEKAH

THE FOOTWEAR FROM INDONESIA TO MEKAH
image
The story of this Pekalongan Youth Make Haru Citizens of the world, Walking Street of Indonesia-Mecca,
Mochammad Khamim Setiawan (28) is nobody. Not the rich or the important people in this country ..
He is just an ordinary young man from Pekalongan. Graduated from State University of Semarang (UNNES)
But his courage and enthusiasm, to make people out of the country bewildered.
Mochammad Khamim Setiawan suddenly appeared in the Dubai-based media, Khaleejtimes. Incredible and moving. He was determined to hajj on foot, from Pekalongan to Saudi Arabia!

Khamim started his journey from Pekalongan on August 28, 2016. He passed through the country by foot.
Indonesia - Mecca
Of course, except to cross the ocean or strait, which he could not have done without a ferry or a boat.
Resting in the mosque, riding in the house of a generous person, until spending the night in the forest he used to do.
Unexpectedly, his effort that seemed impossible, to fruition.
On May 19, 2017, he has arrived in Abu Dhabi, United Arab Emirates.
To Khaleej Times, Khamim recounts his journey. Khamim believes that walking is a virtue in performing the pilgrimage.
This is what makes him the reason for this terrific journey. Testing physical and spiritual strength is the main reason for walking.
Remarkably again, during the journey, Khamim performed daily fasting.
Fasting habits every day, except on the big day of Islam, he has done for the last five years.
His fasting condition made him walk only at night. In good physical condition, he can travel 50 miles overnight.
When he is tired, he 'only' can travel 15 kilometers.
Yet God seems to protect Khamim.
During the trip, he only experienced two illnesses when he was in Malaysia and India.
Khamim did not bring much money. From home he told only took Rp. 1.Juta But in fact, he often get unexpected help on the streets.
@kiwi-crypto
A touching thing, he also often get help from people of different religions.

"I never begged, but I always meet people who give food and other supplies," he explained.
"I was greeted at a Buddhist temple in Thailand, fed by the villagers there.
@steemcurator01
@steemcurator02
@steemitblog
And in Myanmar, I met and studied with Muslim scientists from various countries. in India I am friends with Irish couples from Ireland who cycled in Yangon, "he said, as quoted from Good News From Indonesia.

Khamim believes that hajj is not merely worshiping God. But interacting with people from different beliefs is also a dedication to power.
And Growing a sense of tolerance, according to him is also a form of obedience to God.

Doping Khamim simple, a mixture of water and honey to increase endurance. Two pairs of t-shirts and pants, two pairs of shoes, some socks, some underwear, a sleeping bag and tent, a lamp, a smart phone and a GPS, are all the items he carries.
Only that.
All the equipment is put in a backpack outside which is attached a small Indonesian flag.
He also wrote: "I'm on my way to Mecca by foot" or "I'm on my way to Mecca on foot, When according to plan,
Khamim's long journey ends in Mecca on August 30, 2017, or the day before Eid al-Adha, exactly the year of his journey.

According to media based in the United Arab Emirates, Khaleej Times, Consul General of Indonesia located in Dubai, Murdi Primbani has welcomed Khamim. Murdi said, Khamim is an example for Indonesian Muslims, who teach simplicity, spirituality, and determination.
The story of Khamim does make many people unbelieving. Walking Street of Indonesia-Mecca,
And definitely this Youth Story Pekalongan Make Haru Residents of the Middle East at that time.
image
@esteem by vahmyvargas