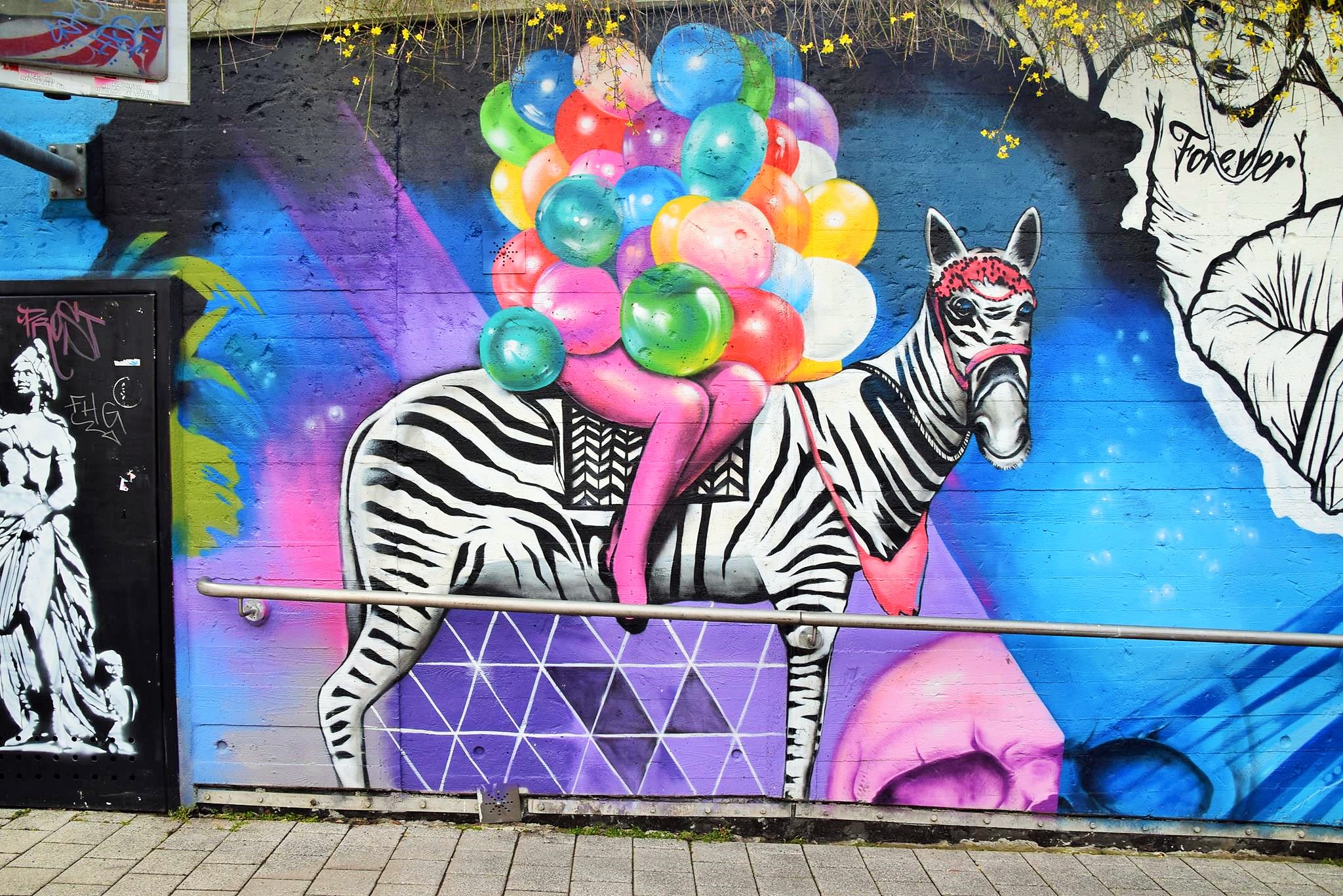 ( 11 pics ) Hello Steemians! First thanx a lot so much for your support! Wow! I was really surprised for the great feedback to the last post, thank you very much! And sorry for the absence, it was a while since the last post, but travelling and getting new photos takes its time... 📸

Back to the series, we are still in Frankfurt City, not the center, but the suburb Ginnheim. There is a little strange and mysterious underground. In early days people avoided it, tried not to go close, there was some black magic going on in the dark....

But then.... the furious painters of anonymous heartful wallwashers showed up. The same way like this name just showed up in my brain while I´m writing. But they "washed" the blackness and uglyness of the place away with colors and creative pictures. The one bad magnet is gone, but now there is still something trying to get the pedestrians. The dark, frightening magnet which is trying to get the walking bys attention is not there anymore, but the new colorful one is there now and is working quite well. Now in a positive way.

But this time it is not the grey depression or the darkness of the nighty tunnel, this time it is the creativity of the paintings, the colors of the artworks and the interesting design. And especially it is a magnet to think about why exactly at this point? Why at this dirty underground? Because there it is needed. And some people made a change. Actually very simple and not to explain with numbers. And here it is completely obvoiusly how easily you can change things by doing things. Local artists changed the surrounding by doing their paint stuff. The effect is incredible. It´s happening in just a small place and in a little cup, but it´s an example that it works. So.... with a lot of many nice cups you can make a cool dish? 😉

In this post here you can see the nearly last part of this marvelous underground with the super group work spray artistic, a last one from the west entrance is still to go. Really a lot of very nice and creative people came togehter to do that "thing", this awesome big and small artwork. And like I wrote before: The community got involved before. This part here is located exactly on the west side of the famous underground. If you come to Frankfurt one day, you should visit it. As well all the other places I mentioned yet, and the many more to come... 😀

Yeah and thanks! It´s a little art gallery, you should check out as well the other posts.

Beautiful cleaning of the blackness and uglyness of this underground passage :-). I like especially the face with the white snake.
Nice to see you back... I hope with a lot of new murals...
@tipu curate

Thanks for your support and the greetings @heroldius ! Same back to you! We went on some travelling, nothing big, but just a break. It´s good to have a break time by time. ... And yes, of course I took a lot of new photos. I discovered an amazing kind of "Hall of Fame" in Munich, just really damn awesome works there. Coming soon.... ;-) Thanks again for your help!

And yes, the "White Snake", it´s great. This part is actually the part where the "middle" graffs are coming together with the "west side" graffs. The snake ist actually a filler. But it does that job perfectly, interesting artwork. And very nice for mentioning it, you look on the details. :-)