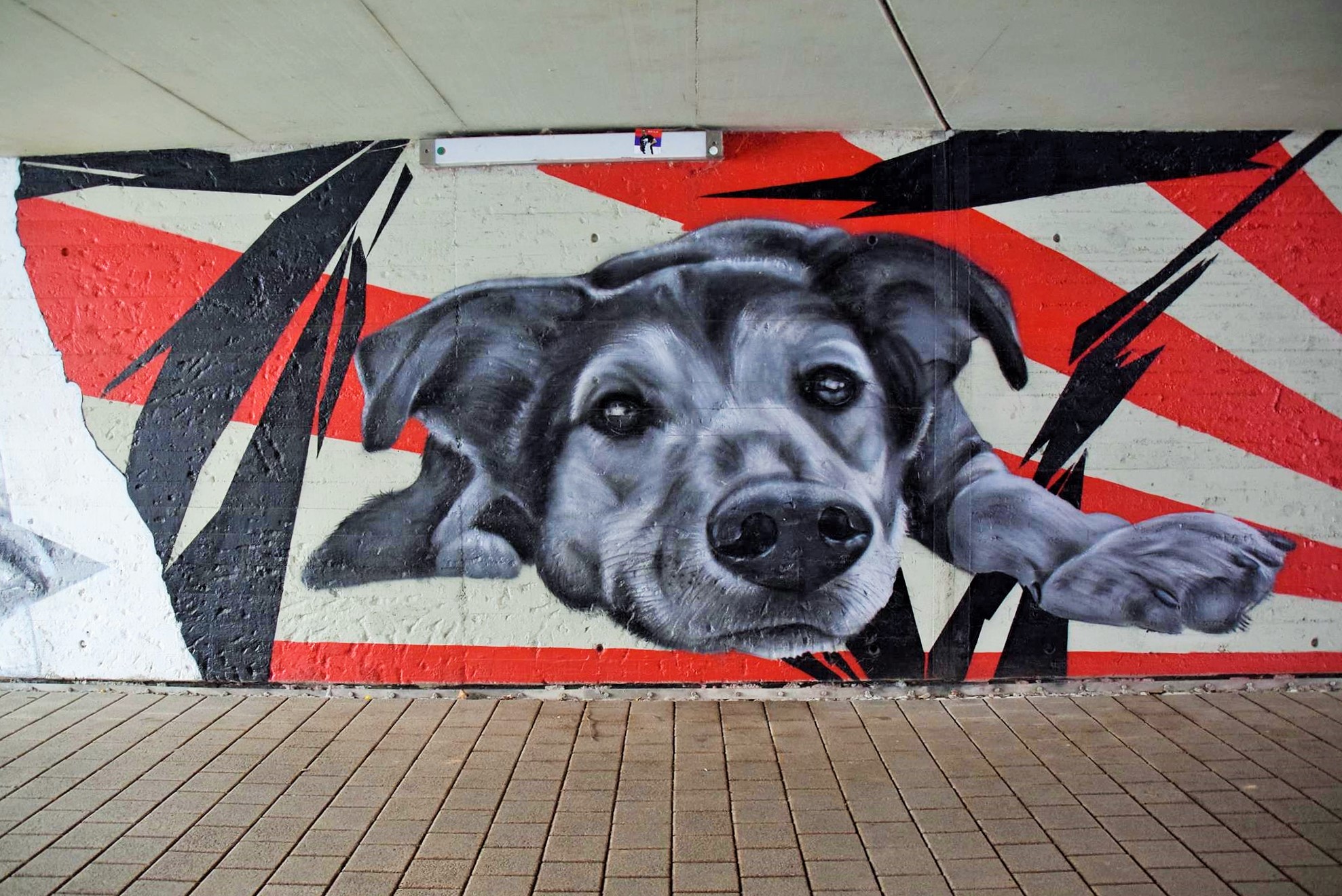 ( 10 pics) Actually I only wanted to make one post about this "tunnel". But I realized it´s not possible. I just cannot. It wouldn´t get the focus on what I want to show. This place is just like a little art gallery. So why not making a few more posts about it. The styles are different, there have been really several artists, each group had its place, so each corner has it´s theme. And meanwhile it´s just damn famous. Isn´t that wonderful? Befor nobody cared about this underground walking through tunnel, it was a nighmare even for the people who had to pass through. Ok at day, but at night... don´t go there, it´s dodgy and drugs and criminals and whatever. ... For real: You have more drugs and criminals and all that anywhere else. There were no "criminals" and "drugs", yes they are around, but not in that stupid tunnel. It was just dark and darkness and grey scares people. Me as well. It´s just the perception. The place was dark and there was a dark energy about it. BUT: only because the people felt it that way, I just think now after all this change that it was kind of a human group perception, which made it just uglay. But wait... . It was ugly. It was grey and ... yes... non-colored. You cannot imagine how everything changed after color went on the walls. It changed everything. Not the world, but this little area. Now people are having fun while walking through, they are enyoing it, they get inspired, they are even walking more slowly. I talked to somebody who told me that he never had to go through that tunnel to go to work, but he is doing it now, it takes 10 minutes longer, but this tunnel makes him feeling good, it´s relaxing for him, it´s giving him a good morning. WTF with a smile. He is now walking through this tunnel, takes a longer route than like a year before, and it takes more time for him to walk this way. But just passing this little tunnel now, to have this little part on his way to work, it gives him a smile, it gives him positive energy. Come on! What more to say about this? ... Or should I say: PAINT EVERYTHING :-) Here we have just the middle part of the tunnel. The theme is quite obvious a mix of dogs and rising sun. Think what you want to think. But most important: Think, imagine, let it flow in your brain!

While putting the pics online another story came up: A woman told us that she is literally bringing her children to that place now. ... As well: What should I say? She told us this, it was just a short random short talk and some weeks ago. But she said, "I want that my kids get inspired". .... Aha... I don´t know how it was before, but I´m sure before there was no color she would never even have thought about that. She would have thought: "I have to take my kids away from that place. It´s bad, bad energy, dark, and I don´t really know, just bad." .... There was before nothing really bad about that place. Just really for real. It was no crime scene it was not brutal what ever, it was no drug place. Nothing. It was just dark without color. Now there is color. And everything is different.

In the following there are a few pics more I posted already, but I do them here again, just that you have the perception how all the themes fit together. In the end: You have to go there by yourself. Really do that. Like everywhere else. Look for yourself. And this is not only about the art. It´s about everything. Look for yourself. Get advices, yes. But look for yourself, and then you will always see it´s much more, than you got told about. So here is the ongoing to the left and the right part. I still have one more theme to got. But in the end, I mean, if you are really interessted, click around on the links I provide, it´s all connected, and imagine how all these areas are combined at one place. For me it is just my thing, I get overwhelmed, I can stay there for quite a while and watch and take pictures and think. Yes, I think a lot strange things, and I love that. I just love it when I watch stuff and it makes me thinking. For me this place is a little asylum of art energy. And how I told you before, the magic is how it changed. Because I still know how it looked before and how the effect was before. There was as well a "magic" before, an "anti-magic". The only difference is that it´s painted now. It is just a true fact. It completely changed because of the colors and the artworks. This is an evidence and it shows that it works.

To the left front comes this here on one side:

To the left back comes this here on the other side: https://goldvoice.club/steem/@vagabundler/streetart-frankfurt-43-waeldchen-2-femme-cascadas-germany

As well on the same part, there is this here, the Comic Family: https://goldvoice.club/steem/@vagabundler/streetart-frankfurt-42-waeldchen-1-comic-family-germany

I want to say as well sorry for my half good and half completely bullshit English. But if you look what I am posting and offering, please look over the "good" language, and focus on the message and much more on the art. And my choice and vote would be this: A world government ruled in a combination by scientists, artists and children.

Great place in Frankfurt to see cool street art. Different styles but it feets together, especially the b&w stars.

Thanks! Just going through the replies, been a lot meanwhile. I will show soon my digital construction work about maps for streetart I did.

This post is supported by @tipU upvote funded by @heroldius :)
profit sharing tokens | For investors.

Thanks for your support @creativecrypto !