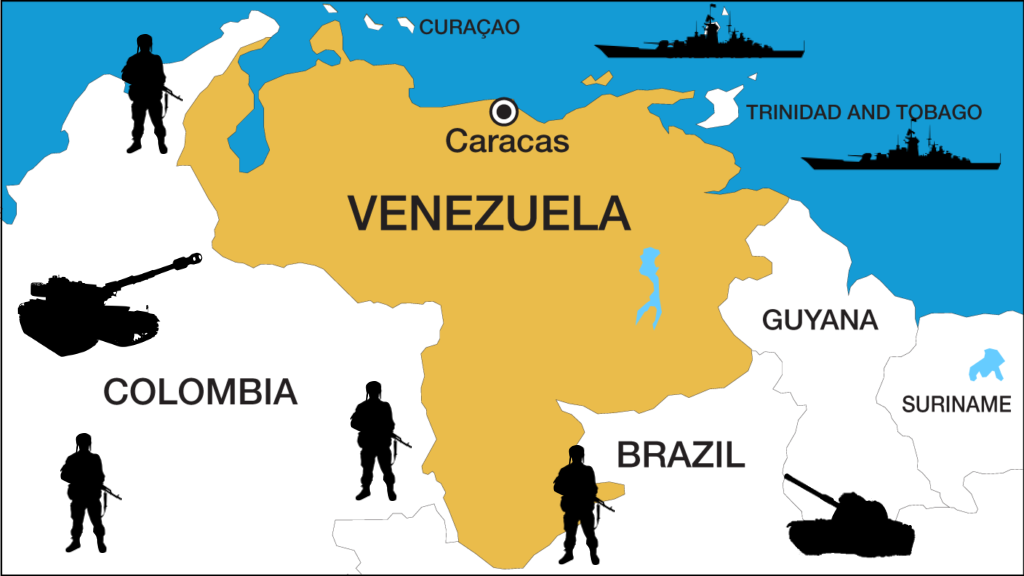 In my previous post, I outlined how the US empire continues to apply increasingly harsh sanctions on the governments of Iran and Venezuela amid global pandemic.

Parallels between the two target nations were also drawn, pointing out how both major oil producing countries had nationalized their oil reserves. We don't have to look much further than this to understand why the US pursues 'regime change' so aggressively.

Today, I'd like to shed light on another aspect of the simmering conflict manufactured by the United States with each of these respective nations.

Perhaps you've heard the question before -

Why did you put your country so close to our military bases!?

It's a ridiculous question, we can all agree. However, this phrase captures so much of what's taking place on the international geo-political stage in just a few words.


Is it just a coincidence?

Not at all. It's completely by design.
Except, of course, that it's the US military bases that have been erected in close proximity to the borders of their adversaries.

It's estimated that the United States has at least 800 known military installations worldwide and likely hundreds of additional secret bases.This number excludes US military bases inside the American states and territories.

I wrote on the topic of the staggering number of US foreign military bases 3 years ago.

800 and the China Containment Stratgy

No other country comes close to these numbers.

By comparison, Russia has 17 military bases outside of its borders, the majority of them in former soviet satellite states such as: Belarus, Khazakstan, and Georgia.

Think of the enemies that are flickered into your consciousness every single day - Syria, Iran, Venezuela, China, Russia,...

Now, go ahead and look at the placement of US military bases on the world map. Slowly, but surely, a clear image comes to mind.

Veteran journalist and filmmaker John Pilger described the "China Containment" theory in his (2016) documentary The Coming War on China the process of encirclement as a method to intimidate, provoke and impede the growth of the Chinese nation.

This technique is also employed against Russia with the buildup of NATO forces along its borders from Europe all the way through the Caucus region.

As was discussed in the previous post, the US is applying starvation sanctions on Iran and attempting to seed the conditions that could spark a revolution inside its borders. At the same time, US forces are have been trying to provoke Iran into retaliation in order to justify the use of US military force.

As a result, it doesn't come as a surprise that Iran also finds itself surrounded by US military installations located in Iraq, Afghanistan, Saudi Arabia, Turkey, Pakistan, Bahrain, Kuwait, Oman, the UAE and Syria (ISIS).

What if the situation was reversed?

How would America feel?

Americans would be outraged and rightly feel threatened.

On March 27th, the New York Times published an article disclosing a secret Pentagon directive aimed at using the Corona virus to launch attacks against Iranian backed militia's in Iraq.

Some top officials... have been pushing for aggressive new action against Iran... an see an opportunity to try to destroy Iranian-backed militia groups in Iraq as leaders in Iran are distracted by the pandemic crisis in their country.

You may think that the US presence in South America is miniscule but you would be mistaken. Over the last decade and half, the US has been busy trying to regain influence in South America after a majority of countries elected leftist and progressive governments in the 1990s and early 2000s.

A notable exception in the region during this period was the right-wing governments of Alvaro Uribe and Juan Santos in Colombia. Although entangled in a never ending civil war, and "war on drugs", Colombia has remained a staunch ally of the United States. Despite ongoing chaos from cocaine production and trafficking emanating from inside the country's borders the US has continued to fund and support successive governments.

The right wing Uribe government which was in power from 2002 until 2010, entered into several key strategic partnerships with the US government (USG). The main partnership was the "Plan Colombia" agreement provided funding, training and "military aid" to combat drug cartels and left-wing insurgents.

According to Wikipedia, the operations were successful in reducing cocaine production in Colombia by 72% from 2001-2012! However, internal documents provided by Wikileaks state that Plan Colombia was widely understood to be a complete failure.

Human rights violations by the Colombian military and paramilitary partners resulted in thousands of "extrajudicial executions" of civilians and suspected FARC sympathizers.

In 2006, Uribe entered into negotiations to grant the United States military access and use of 10 of Colombia's military facilities and reportedly signed a ten year contract to that effect in 2009. Uribe's successor Santos continued the process approving access to US military on Colombian bases.

Critics of a mounting US presence in the region point out that the 'threat' of 'drug-trafficking' provides a blanket justification.

The "presence of US military bases and
troops in our region and the main argument that the Empire uses for its
presence in Latin America: drug trafficking and violence in the region."

When Uribe met with Argentinian president in 2006 Kirscher raised concerns about US influence in the region. Krischen was unequivocally opposed to the plan questioning why Colombia deemed it necessary.

CFK did not offer a statement after the meeting, but
Casa Rosada sources told the press that she had conveyed her
opposition to the Colombian decision and to the
"establishment of foreign bases in Latin America."


She argued that U.S. forward operating locations were
"inappropriate" ("inconveniente"), Colombia "should work to
lower the high levels of conflict in the region," and that
the "installation of bases would not contribute to this
objective." "La Nacion" said that she referred to the U.S.
presence as a "timebomb waiting to go off."

"El Pais" said that Fernandez pressed Uribe on the
need for this new measure under Plan Colombia, given the
perception that the FARC had been greatly diminished and
almost destroyed in recent years. Uribe was said to respond
that 500 tons of cocaine traffic continued to present
security problems. He also explained that the U.S. would not
be occupying "bases," to which CFK was said to ask, "What are
they then?" Uribe offered to send her a draft of the
agreement.

If not occupying bases then... "What are they then?"

In the fall of 2009, US and Colombian officials signed an agreement, granting the US armed forces access to seven Colombian military bases for ten years. These are two quotes from a US Air Force document about the bases:

> ##### – “Opportunity for Full Spectrum Operations throughout South America, against threats not only from drug trade, but also from ‘anti-US governments’ in the region.” – “The agreement operates from the same (failed) mindset that has given rise to the School of the Americas (SOA / WHINSEC). The purpose of the bases is to ensure US control of the region through military means.”

The purpose of the bases is to ensure US control over the region through military means.

In early 2020, Brazil's right-wing authoritarian president Jair Bolsonaro had a string of meetings with top level US officials.

On March 18th, Bolsonaro's first stop on his inaugural trip to Washington DC was to pay a visit to CIA headquarters. Aside from being an unusual choice it had much darker undertones as the two sides met to discuss the ongoing 'threat' to stability in the region posed by Venezuela.

The intellectual gymnastics required to depict Bolsonaro’s CIA visit as normal behaviour is beyond even the usual chorus of Wall Street lobbyists and foreign correspondents.

Furthermore, The Grey Zone reported that Bolsonaro's government penned a deal with US military SOUTHCOM (Southern Command) on March 30th, bringing Brazil under the umbrella of the US Military Industrial Complex. In case the This agreement verifies US military expansion across South America reiterating statements made by SOUTHCOM's commander two weeks prior.

In testimony before the House Armed Services Committee on March 11, the commander of US Southern Command, Admiral Craig S. Faller, announced, “There will be an increase in US military presence in the hemisphere later this year.”

This does not bode well for Venezuela, as the US now has set up shop in along the two longest borders of the country.

In the last 24 hrs, there have been reports of US troops amassing on the Colombian-Venezuelan border after being taxied there by Colombian helicopters. Looking back on early 2019, the Venezuelan opposition, in tandem with Washington, tried everything it could to spark unrest inside of Venezuela that would trigger US intervention. In the end, the campaign of propaganda and economic pressure was unsuccessful.

Even so, it appears that the Trump administration and US military are once again preparing to intervene in the domestic affairs of Venezuela to attempt regime change. This time by force while the world is preoccupied dealing with pandemic.