Are Smart Media Tokens (SMTs) the Future of Content Creation? 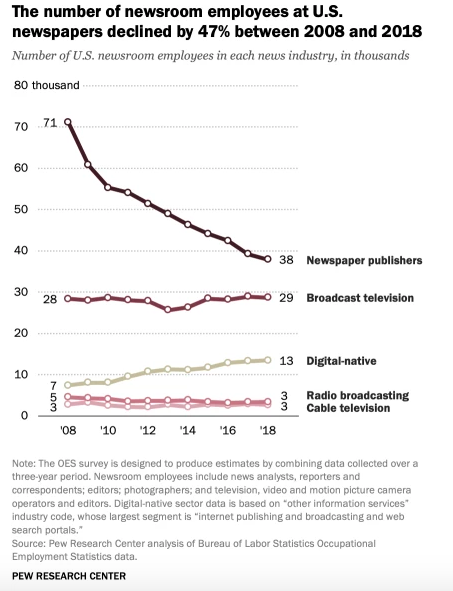 A major touchstone within the media space has been the exploration of new business models. At current, the ad-based mechanism for making money has fallen short in many respects. It can incentivize sensationalized content to generate clicks, for instance. From a marketing perspective, current models also promote the buying of “likes” or “upvotes” rather than authentic market interest.

Crypto does offer some alternatives to this. At UFOstart, we have written broadly about a number of these alternatives too. In the following post, however, we’ll dig into Steemit’s upcoming Smart Media Tokens (SMTs) project. It is similar to an ERC-20 token, but with a laser focus on content creation.

More importantly, it aligns with our vision of a more equitable media landscape, from marketing to journalism and everything in between.

Several major news organizations have reported layoffs across the board. Business Insider reported in September 2019 that this figure reached 7,200 in what is being dubbed as a “media landslide.” Over a much broader time horizon, the Pew Research Center reported that employment across American newsrooms dropped 25 percent from 2008 to 2018. It has included the likes of Vice Media, ThinkProgress, Spin, BuzzFeed, and a host of others.

This means that traditional news services are low on funds, and readers are turning to alternatives to learn about the world. This is, in part, why many digital-native newsrooms are experiencing significant growth. But, as employment and readership moves from legacy journalism to substitutes, the business models have all remained relatively the same.

Paywalls and subscription-based frameworks are indeed popular, but are they useful for keeping publications afloat?

In a memo to its staff, executives at The Los Angeles Times indicated that one of the country’s most prestigious newspapers was far from meeting its digital subscription goal in July 2019. This is just one example of a much larger trend. But even as one moves away from a community of traditional readers to other communities found on Reddit, Facebook, and elsewhere, a whole new set of issues spring up.

To stimulate promotion and a presence on any social media platform, many communities have turned to gray market services. Gray is distinct from black in that they aren’t illegal, but these services are not necessarily virtuous. It can include techniques such as buying likes, hiring bots to retweet content, and so forth.

It also makes it difficult for users to separate the wheat from the chaff. In cases of political campaigns, it often results in voter apathy as deciphering between critical information and noise becomes too much of a burden.

What emerges from this data is a multi-pronged issue for all content creators working in and around online environments. It affects how quality publications make money, how readers and users gather information, and, in a final stroke, centralizes communities to a limited number of platforms.

Consider how thriving Facebook communities maintain themselves, for instance.

The barrier to entry is low, as making a Facebook group is free. But as this group grows its community, moderating high-quality discussions, continuing to market the community beyond the social media platform, and simultaneously finding ways to monetize the whole thing becomes a full-time job with little compensation.

All the while, Facebook simply soaks up the ad-revenue generated from a thriving community. Indeed much of the value created lines the pockets of the platform rather than the group itself. Fortunately, this may soon change.

Consider Li Jin’s, of investing group a16z, take on the rise of the “passion economy” and “Community-as-a-Service.”

“In the next few years, we’ll see more large communities moving off major social platforms where they originated + >setting up their own independent properties, with built-in direct monetization models.”

One such group is the Facebook group called “What Would Virginia Woolf Do?” which currently hosts 30,000 members on Facebook. Since October 16, 2019, the group has shut down, moved to another platform, and begun charging users membership fees. Julie Young, a researcher who formerly worked at Goldman Sachs and 3D producer at Emblematic Group, commented on the move that:

These descriptions indicate a much broader trend. Users are fed up with relying on centralized services that capture most of the value to host their communities. These days, they are demanding customizable features, independent monetization capabilities, and incentives that are tailor-fit to the needs of a growing community.

In essence, the Community-as-a-Service narrative looks to return control over online experiences to users.

If you can’t already tell, there is a significant overlap between this ideology and that of cryptocurrencies and blockchain technology. To meet this need, Steemit is developing an off-the-shelf token protocol for precisely this.

What Are Smart Media Tokens (SMTs)?

Steemit, one of the first blockchain-based social media platforms, has recently unveiled its Smart Media Tokens (SMTs) project. According to the e paper on the subject, SMTs will behave similarly to ERC-20 tokens in that they will be customizable for each project. Instead othereum](https:/ps://www.ethereum.org/), however, the SMTs will leverage the native Steemit blockchain. This is because the SMT will be application-specific to content creators and the specific needs of community growth.

“General purpose platforms (such as Ethereum) are a great test bed for these approaches to scaling, however, a >platform that takes advantage of all the product-market fit discovered by Ethereum, that then applies it to a more >specialized, iterative-upgrading model, such as Steem, can scale its processes more effectively to meet the demand >discovered by that product-market fit.”

This customizability is defined through several out-of-the-box options. Founders of the Virginia Woolf Facebook group above would be presented with the following interface.

As one can see, there are inflation controls, rewards mechanisms (either linear, quadratic or bounded), and a tool kit to coordinate a token raise similar to an initial coin offering (ICO). This allows media folk to focus on community and content rather than the sometimes opaque details surrounding blockchain technology. The use cases are myriad too.

Thus, the launch of SMTs (predicted sometime in Q1 2020) offers a technology for communities looking to exit Facebook. The first application would be for large publications like The Los Angeles Times to adopt a cryptocurrency-based subscription and comment model. Naturally, such a large paper has a massive following already, and a “LAT Token” launch, similar to an ICO, would help quickly raise capital.

On top of that, the SMT would also stimulate further growth as readers would realize that there is indeed money to be made in participating in The Los Angeles Times community. According to the rewards structure of the token, a percentage of LAT Tokens used for comments could go directly to the publication too.

Any publication could leverage multiple tokens too. When cannabis was legalized in Colorado, The Denver Post quicled out](https:/(https://www.imdb.com/title/tt3621360/) a section of the paper that would cover the sector exclusively, called nnabist](https:/(https://www.tist.co/). To eng. To engender interest around this new section, as well as bolster funding for editors, journalists, and photographers of the new section, The Denver Post could quickly launch two SMTs: one for The Cannabist* and another for the larger publication.

This could spur growth within both communities but opens up the possibility for partnerships with external sub-groups. They could end up setting a standard for the cannabis token in the space and convene all the disparate Internet groups all interested in the subject.

The token itself could be earned and distributed in several ways too. The clearest examples are via some variety of tokenized commentary function or general fundraising. A third option is to pay curators for sifting through the media. Moderators of niche groups or forums could earn SMTs for their work by offering outstanding curation of content.

Readers, viewers, and users would then rank the quality of this curation via tokenized upvotes, of which a portion of the profits would go directly to the curators.

These tokens could then be recycled back into the system via broader voting measures. Does the community want to hire native writers to contribute content? Are there necessary upgrades to the forum, site, or online community that need to be made? Does the group need to launch another ICO? All of these questions could be put to the community of token holders and held for a vote. In essence, every token holder, no matter how small, would invariably wield the power of a traditional shareholder of a large firm.

This Is the UFOstart Vision

If it’s not already clear, there is a fascinating future emerging from the blockchain and crypto space. As thinkers and engineers come together around the technology, the ideas generated offer solutions to real problems. Currently, thriving communities are sandboxed into centralized services. The means of monetizing within these sandboxes are also incredibly restrictive.

The abovThe above outline shows how the current model can be flipped on its head. Instead of apathetic tech conglomerates deciding how a community should operate, the community itself controls its own trajectory; from raising funds, pursuing goals, expanding the user base, and eventually offering real jobs.

“SMT communities may be bolstered with paid positions, guild roles, or jobs that are defined in programmable, >native smart contracts and matched with continuously elected participants. Rewards received through the elected >position come from some portion of the token’s Founder allocations or donations that are sent to a paid position >contract.”

Ultimately, what we are looking at is the near-infinite expansion of Ronald Coase’she Firm](https:/rm].” (https://www.economist.com/economics-brief/2017/07/27/coashe-firm)."

In his theory, Coase stated that the rise of the firm was one of the [nt ways](https:/ys] (https://medium.com/ufostart/new-corporate-structures-on-the-crypto-frontier-a7ece7d520b5) of organizing strangers economically. This theory began to expand with the rise of the Internet as companies no longer needed expensive brick and mortar buildings to house their employees. The introduction of cryptocurrencies, blockchain technology, and smart contracts goes even further.

In this vision, which weFOstart](https:/rt] (https://medium.com/ufostart), the founders change roles with curators who change roles with stakeholders and so on indefinitely. It allows anyone to perform any task as long as they are acting in the best interests of the majority of the community. More importantly, everyone in the community has a voice that shapes the entire enterprise. In a world of tech giants, this is indeed a vision worth fighting for.

Very good write up. I agree that customizable communities and reward structures could change the overall social media landscape.
I hope that the SMT project will attract enough eyeballs and users who are willing to participate and create awesome content for their communities.
Exciting times are definitely ahead of us.