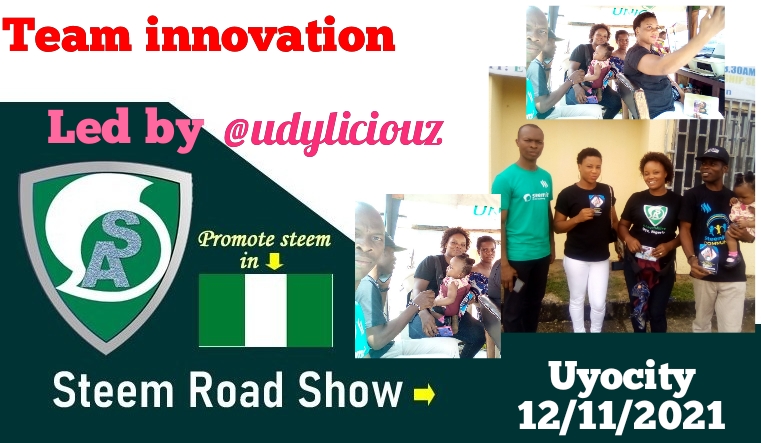 Good day everyone in steemalive community and to my fellow promoters I greet you all.

This is my first Roadshow as a team coordinator. I am @udyliciouz coordinating team innovation. Before the Roadshow I had to put a call across to all the people who will be joining team innovation in Promoting steemit.
Some responded well and others have other engagement they wanted to attend to promising they will join some other time.

We all met at mindset office and promoted steemit at University of uyo first gate.

We had so many positive response but unfortunately the network was poor preventing many from signing up. We were able to sign up just one person while others were still trying but couldn't.
We will return to help them in signing up and writing achievement post.

The picture above is @nyaknnoumoh, she signed up but still have difficulties in making post and in the community. I assisted her by showing her the different communities we have in steemit and what to post in each communities. I also encourage her to always join in steem promotion.

I also approach a woman in a bookshop explaining steemit to her and also showing her some things and sample of post she can make in steemit platform. She was so happy to hear about it and was eager to sign up.

Here I promoted steemit to group men in a shoe Maker's shop. They asked many questions about the platform and lastly they collected the flyer and say they will sign up on their own. I encourage them to call or Whatsapp the number on the flyer in case they have any difficulties signing up.

Trying to sign up the woman I talked to in the bookshop. It wasn't successful because of network.

It was a successful Roadshow. Even with the bad network, we created awareness and also activated old users to be active again in the platform.

I appreciate the @manuelhooks, @fonexsignature, @gentlesun who join Team Innovation in Promoting steemit.
I also appreciate everyone who always take part in steemit promotion and my fellow team coordinators. @ijelady, @eliany.

Thanks to my State representative @ngoenyi who always promote steem tirelessly.

Thanks to @focusnow for steem Roadshow initiative and for always rewarding active and serious promoters.

Thank you for this wonderful report from you dear team cordinator, @udyliciouz. It is well detailed. Others will surely join as time goes on. Weldone with your team. I appreciate your efforts

Thanks so much ma'am for going through my post and supporting it. I am grateful

Weel done. you had a quite successful day :) Keep going !!!!

Yes o. We thank God for the success

Well done Team Innovation, we work together to promote steemit.

Thank you my dear sister and fellow promoter

Yes ooo. Thanks for visiting my blog

Bbi love your zeal in steem promo, continue to be active I personally appreciate your 💕 steem on!

Thanks so much dear sis for appreciating my effort