Application to serve as steemalive Team coordinator in Uyo, Akwa Ibom State of Nigeria. I have also power up all my earning|| by @udyliciouz 10% payout to @steemalive #club5050 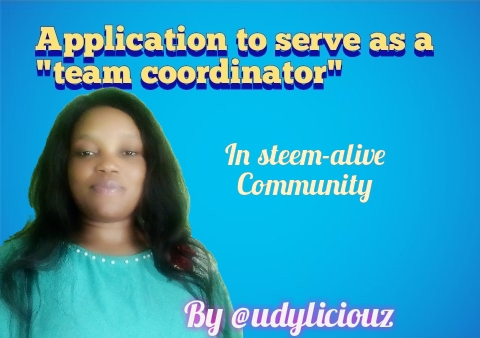 I am applying for the above stated position in this community.
My name is Uduakobong Emmanuel also known as @udyliciouz in steemit.
I heard of steemit on the first day of June, 2021 through my sister @esthyfashion. When I declare my intention to join the platform, she took me to our city coordinator @ngoenyi for sign up. From that time onward, I have been an active user of the steemit platform. I have never been inactive for a week.

I promoted steemit to @manuelhook the same month I joined steemit and he also sign up with the help of our city coordinator. He has been an active user of steemit platform too.

Talking about roadshow, I always make myself available. I don't use my current status as a nursing mother as an excuse, I put in my best and join in signing up new users during roadshow with my baby.

Aside from the Roadshow, I also avail myself in so many promotional activities, Some of which I personally arranged.

I don't hesitate talking to people about steemit. I used every opportunity I have to promote steemit to people. One day I promoted steemit in my child's school and as a result, I signed up 6 new users.
Refer to the post link here

From the time I joined steemit till today, I have been able to personally recruit about 15 users.

I have been able to guide and mentor some of my recruit on how to make quality post and apply markdown formatting.

I also encourage some of my recruit by sending them contest links and through personal phone calls.
About ten of them have join steemalive curation trail with 100% weight.

If the authority of being a team coordinator is confer upon me, I will take steemit promotion and mentorship to a greater length.

Wallet before power up

Wallet during power up

Wallet after power up

I will be happy if my application meet your humble consideration and I will discharge my duty as a team coordinator effectively and satisfactorily.

Thank you for applying. Once we are through looking into it, we will get back to you

This is mouth watering power up and i wish you the very best in your application.

Thanks so much @benson6, I appreciate

Congratulations on being in the top 5 post of the day.You have really done so well since joining Steemit.Thats the person we want.I am glad you are also powering up @udyliciouz

Thank you so much @samuel20, for appreciating my efforts.

Congratulations, your post has been upvoted by @scilwa, which is a curating account for @R2cornell's Discord Community. We can also be found on our hive  community & peakd as well as on my Discord Server

I appreciate for your work for being in top 5

Wow you will be well 😊 to serve as a steemalive coordinator.

Hello dear @udyliciousz,I must say that I love your hardwork and appreciate your effort towards promoting steemit. I know many nursing mothers who uses their condition as an excuse not to do anything but trust me you're doing a good job, I hope to be as strong as you are when i will be in this same condition someday😁😁😁😁

Wow! Thanks so much

Been a single lady on steemit is enough work to deal with how much more a nursing mother and yet with the capacity to be a team cordinator.