My mom is in a critical condition but research says it's treatable. 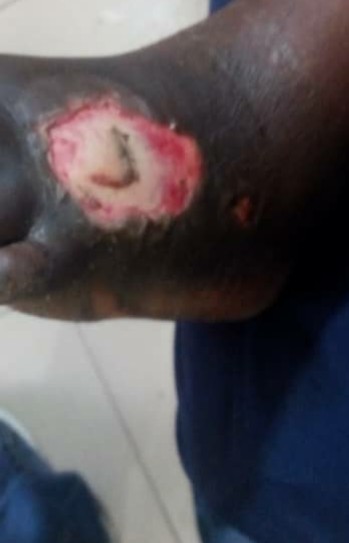 It's being a while I graced this space with my contents. I didn't mean to do that on purpose. The past few weeks has being so challenging for me and my family especially with my mom in particular. I have never being overwhelmed like this in my entire life before. Though there has being some downtimes when unforeseen circumstances is imminent to test one's endurance. But since it is in the gene of humans to overcome such situation. I tend to rise up on my foot after such ill fate eludes me.

For some of my avid readers who take their time to read the humble posts that proceeds from my account, some of you will recall one of my post that talked about my mother's health status. You guys won't believe that the battle has changed it's skin. First it was typhoid malaria that weighed her down but due to the incompetence of the nurse that administered treatment to her. The needle from the IV that was inserted in the left part of her leg caused a swell cos as at then it was hard to find any of her veins on the arm that rightly suits the penetration of the IV as my mom suddenly became lean during that period.

Afterwards, my mom's sister was worried as my mom communicated the issue of the swell to her. My mom's sister demanded she came over to her place cos of the urbanized feature her environment has cos we live in the suburb region of the state. Anyways, The treatment from the IV and malaria drugs administered by the incompetent nurse did contain the typhoid malaria from her body but the swell just refused to heal.

On getting to her sister's place. She was taken to the general hospital and test conducted to know the severity of the issue on her leg wasn't the result I was expecting. Test showed that my mom has some serious bacteria infection in the innermost layer of her skin. Tonight, I saw some pictures of her current leg condition, it wasn't pleasuring. Well, I did a little google research to know if the bacteria infection is treatable and yes.. google didn't fail to give me the answer I want.

For now, I can't be there with my mom due to my exams starting in six days time. Once I'm able to do the exams for the compulsory courses, I may have to boycott the exams for my elective courses, my mom is so important, she's more deserving to have my presence.

My mom is part of all I got in this life. I am divided after receiving this news. The timing is not just right especially with the financial state of the family so unstable. If wishes were horses... I'll earnestly wish that my mom be made whole instantly.

She was moved from the casualty ward to the emergency ward after the result of the test showed infection of bacteria on the innermost skin...... The bacteria infection has a name but I have preferred to explain it than to say the name, the name breaks my heart. It devours my sanity. So please pardon me from typing it.

....They do say time is money but I tell you, life is money too.. And right now.. That financial buoyancy is lacking. I feel hopeless right now, my heart is broken. The situation chose a toothless time for my family to bite it off. Wrong time!!!

Greetings my friend! You have received 1% upvote, thanks for being active despite of the bear market.

We are group of people that rewards users like you who can watch and comment in our topic video explained by Brother Eli Soriano, you can check our latest post here @hiroyamagishi.

We have dedicated 30,000 #SteemPower to vote for all the interactions in our post. It wasn't much, it's our little way of giving thanks for watching our video.
Join our group - Discord https://discord.gg/vzHFNd6

If you don't want to receive a message from us, reply Stop

We pray for your mother and family! It’s sad but God will remember your family and heal her.

Amen and thank you 🙏🏻

No condition is permanent! Never think this is the end of life, its just life challenges. Hope for the best out your mummy and family. May God intervene in your family.

Thank you and amen 🙏🏻

Ohh my god that's so clumsy of that nurse. Her leg has gone so very bad. I hope she is in the right hands now and getting proper treatment.
Wish you all the very best for your exams and take it easy my dear.
Your mom will be fine.
I was wondering you disappeared and so many days no news, but good to hear from you, though the news is not very pleasant. Do take care of yourself too :-)

She's getting better and yes she's in good hands now and thanks also for the well wishes, I'll be back in no time ♥
How are you?

That's good to hear. Take care my dear and do well in your exams.
I am doing very good. Thank you :-)