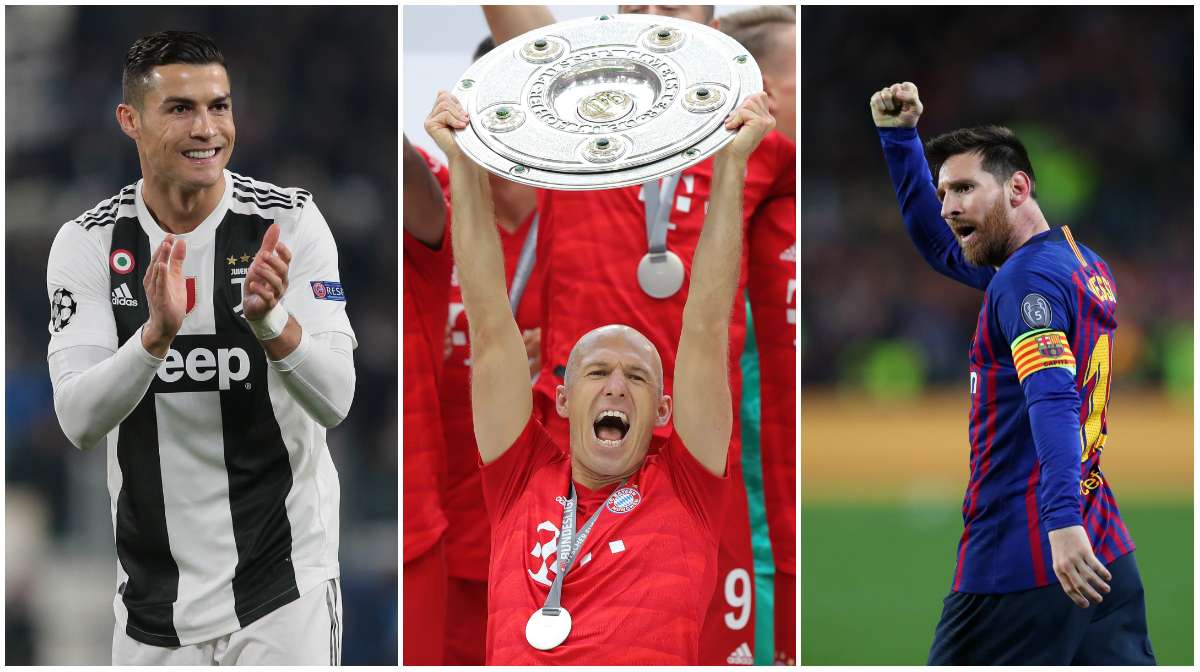 The Bayern Munich legend may have flown under the radar, but he bows out of the game as one of the best

July 4 is known as Independence Day in America and for Arjen Robben in 2019 the date marked the perfect time to announce his split from the beautiful game.

After playing over 500 matches for club and country, the Dutch winger has decided the time is right to fly away into retirement at the age of 35.

And with a trophy haul that includes league titles across England, Germany, Netherlands and Spain - who can blame him?
While Cristiano Ronaldo and Lionel Messi have battled it out publicly over the past decade for the crown of world's best, Robben has operated eloquently in the shadows with his impressive achievements showing he is more than deserving of a place alongside this generation's greatest.

Inevitably wherever the Dutchman has gone in his career, success has always followed.

Starting out in the Eredivisie with Groningen in 2000 as a 16-year-old, Robben ended his first season with the club as their player of the year.

Sealing a move to PSV two years later, he hit the ground running, scoring 12 goals from 33 matches to taste league success for the first of what would be many times.

After attracting interest from Manchester United, the pacey attacker moved to Chelsea in 2004 and despite a number of injuries, still managed to strike seven times as the Blues picked up the Premier League title - something they'd also replicate the following season.

Robben's three years in England ended with him claiming two league titles, two League Cups, one FA Cup and one FA Community Shield - a haul any foreign player today could only dream of.

Real Madrid was the winger's next stop where he once again experienced immediate success as he ended his first season in Spain with a La Liga title.

Only one more campaign in Madrid would follow for Robben however with the arrival of Ronaldo among others leaving the Dutchman on the outer.

"It was not just Ronaldo. Perez returned as the club's president. He then bought Ronaldo but also Kaka, Benzema and Xabi Alonso," Robben told Goal in May.

"Real spent so much money and we were told that they needed to make a bit of money back on outgoing transfers."

It was a man-of-the-match performance to rival any other considering the turmoil the Dutchman had gone through following his penalty miss the year before - with his own fans booing him during an exhibition match between Bayern and the Netherlands played in the aftermath.

"For a moment I could not believe what was happening in our own stadium. I was shocked," Robben said.

Down but not out, Robben was always destined to pick himself back up after such disappointment and it was this innate ability to rebound both physically and mentally that ensures he leaves the game as a true legend.

Despite playing consistently crucial roles in his team's success over the years, Robben rarely got the individual recognition he deserved.

The fact he never finished in the top three for Ballon d'Or voting is just one example of how the Dutch flyer managed to sneak under the radar. Unbelievably, even after winning the Champions League and a domestic treble in 2013, Robben still somehow finished eighth that year in voting.

But for an attacker whose assist tallies were never far off his goal-scoring returns, it's safe to safe Robben was never a player looking for individual recognition.

Incidentally, playing for his native Netherlands remains one of his crowning achievements, despite the fact he never lifted a trophy with the Oranje.

"It might be a cliche, but there really is no better thing than playing for your own country," Robben said at his retirement announcement.

"In the end, I decided to quit in 2017 after 96 international caps. I got to play six big tournaments and was the captain during my last years with the team.

"All together, it's an unforgettable time that I'll always cherish."

As one of the more intelligent footballers that have graced the pitch over the past two decades, Robben's confirmation that he was hanging up the boots had a rather poetic feel to it.

"It's July again. The time for a soccer player to be preparing for the next season. Not me," Robben said.

"I've used the last couple of weeks to think things through. As everybody knows I took some time after my last match for Bayern Munich to make up my mind for the future. And now I have decided to end my career as a professional player.

"This has been without a doubt the hardest decision I have had to make in my career. A decision in which 'heart' and 'head' bumped into each other. The love for the game and the conviction that you can still take over the world versus the reality that it doesn't always go like you want it to and that you're no longer a 16-year-old boy who doesn't know what it's like to be injured."

And with that thoughtful farewell, one of the game's all-time greats has said good-bye but it's safe to say he won't be forgotten anytime soon and should be remembered alongside the very best of this generation.

Dear friend, you do not appear to be following @wafrica. Follow @wafrica to get a valuable upvote on your quality post!