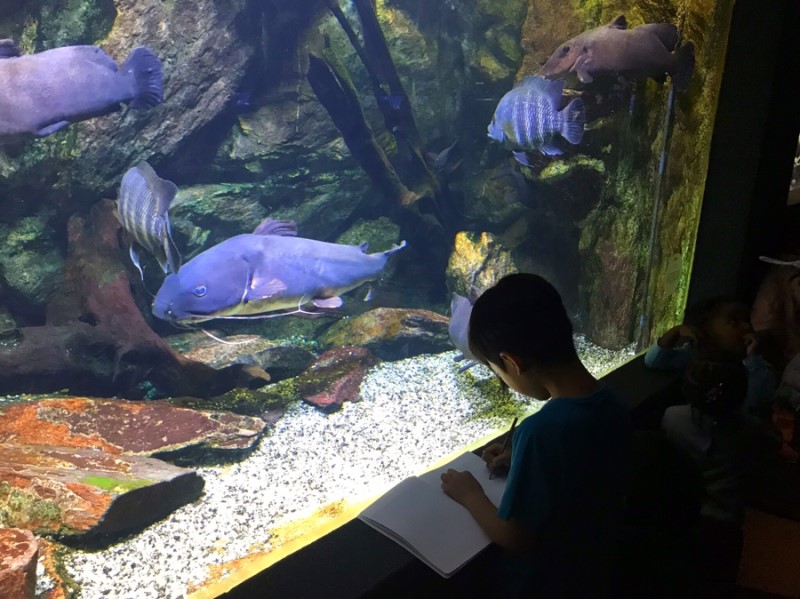 celebrate World Ocean Day on June 8, the Paris Tropical Aquarium was free for the weekend. Thanks to this, I realized that there was World Ocean Day, and I was able to visit the aquarium for free while experiencing the atmosphere of the 12th arrondissement of Paris.

World Oceans Day is an anniversary commemorated at the Rio Conference held in Rio de Janeiro, Brazil, in 1992. Officially adopted by the United Nations in 2008, it is a world anniversary. World Ocean Day is an opportunity to showcase the world's oceans each year and celebrate the delivery of marine products such as aquariums, pets, as well as seafood, and to appreciate their unique value. The ocean is also the maritime transport route of international trade. Global-scale pollution and excessive consumption of fish have reduced major species

Located in the basement of the National Museum of Immigration History, 15,000 animals of 700 species live in the aquarium.

There is usually an entry fee of 5 euros for both children and adults 4 years of age and older. The aquarium in Trocadero is 20.5 euros for adults and 13 euros for children under 12 years of age.

Even at 9 pm, these days are as bright as midday. So on weekends, I'll relax and relax, but I'll be out late. When we arrived at the immigration museum at about 4 pm a huge queue was waiting for us. As we sighed in front of us, the lines lined up seemingly endless, we were comforted to see the long lines blowing behind us. The people lining up behind us waved the whales as if they were tired of looking at the long lines. Most of them were families with strollers and children, and it was the day when the citizens of Paris confirmed that they like their free gifts as well.

After an hour and a half of boring wait, admission was possible. At the same time, looking at the sculptures carved on the exterior of the building was able to soothe. The children endured the tedious hours that were quite long, looking for ants and moving around.

The aquarium was much larger than I thought.

In the middle of the center lived two types of crocodiles that would have come out of the Discovery Channel.

The whole crocodile was amazed at first seeing a white crocodile.

The aquarium was filled with crocodiles and was divided into various themes such as regions and types.

The first child eagerly observed the appearance of fish, crocodiles, and turtles in a notebook that he had drawn to draw fish. The second child waved hands to the fish, greeted the eyes of the living marine animals, and continued to talk. There was a special fish that followed the child's movements and made eye contact with the child.

Undersea is a mysterious world that stimulates human curiosity as much as outer space. So when I was younger, I drew a lot of ridiculous paintings when I imagined another world in the ocean. Facing the diverse and eccentric and beautiful creatures living in the aquarium, I thought how mysterious and mysterious this world I lived in.

But at the same time, looking at those extraordinary creatures looking into the eyes of the child, I thought how frustrating it was. When you visit the zoo and the aquarium, you always feel guilty.

Animal rights are easily lost in the selfish privilege of humans to comfortably watch other life. Animals that have been evolved and adapted to the environment for hundreds of years and thousands of years, moved from their roots and survived to be exhibited and tamed.

After all, it is a violent act.

Who has granted human rights to trample on and take away the freedom of other living things, and is it right?

The good news is that there was no human-centered animal abuse program here, with rapport with animals such as the Dolphin Show. While the existence of an aquarium or zoo is feasible, if it must be present, at least humans constantly study what environments are less stressed by animals, so that they can design and set up zoos or aquariums as close to their habitat as possible. You will have to. In addition, various shows and programs that suffer from wild animals for the purpose of making money should be eradicated.

If there is conscience for us human beings.

There was an exhibition of how tap water was produced, purified and delivered to us, showing each step through a tunnel. The tunnel became a great play facility for children, and several children crawled through the tunnel, all playing for a long time as they sweated.

After two hours, I went around the aquarium and went upstairs to talk about various ateliers and lectures on sea life and environmental pollution. The fish's tail fins were buried in the center of the fish buried in a pile of plastic rubbish, and I could talk a lot with the children.

Even though it was near closing time, we went out to the museum to see the people standing in line. I found out that I was performing arts and stopped to watch. They saw each other from afar and moved very slowly to meet and kiss each other. The children enjoyed it because it was like watching a motion picture in slow motion.

After attending the Paris Tropical Aquarium, it was nice to talk about the animals and the animals.

The image of plastic trash and dead fish was strong The children seemed to be imprinted on their own by how much plastic trash killed the ocean, the land and the many animals that live there and how serious this was.

Everything you experience with your children is a story.

Even when I want to stay at home, I take my children somehow.

So no physical strength is left on the weekends.

Thought vowed not to be a grim parent, today is the beginning of the day with a light awakening to the children asking where they will go noisy on the weekend morning.

Honestly, it's a little scary to see children planning where to go.

Congratulations @travel2020! Your post brought a smile to the TravelFeed team so we have sent you a smiley. Keep up the good job. 🙂