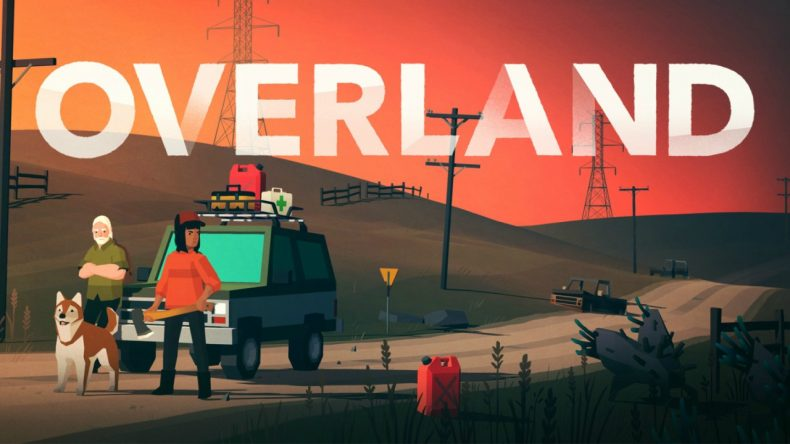 Games like X-COM has the option to let you play out in ridiculously punishing scenarios. The component that makes it all infuriating regardless of how hard you play, is the RNG mechanics. You put a bad roll on Dungeons and Dragons, your game will flounder at times. This case, however, you'll flounder quite a lot.

Overland's concept follows roguelike elements, of which you have a randomly generated character with traits, different level designs, variations of enemies and of course, puppies. Lots and lots of puppies. While I was getting the hang of the game's somewhat overarching mechanics, few points really bothered me about it.

It's very difficult, sometimes even unbearable. The game lacks proper info and learning curve, as the only way to figure these out is through trial and error. You're flung to difficult no-win scenarios at times that just throws a wrench at your skirmishes. While it was fun to enjoy as a concept, it failed to capture any meaningful ways to overcome its challenges and stuck to tedium. 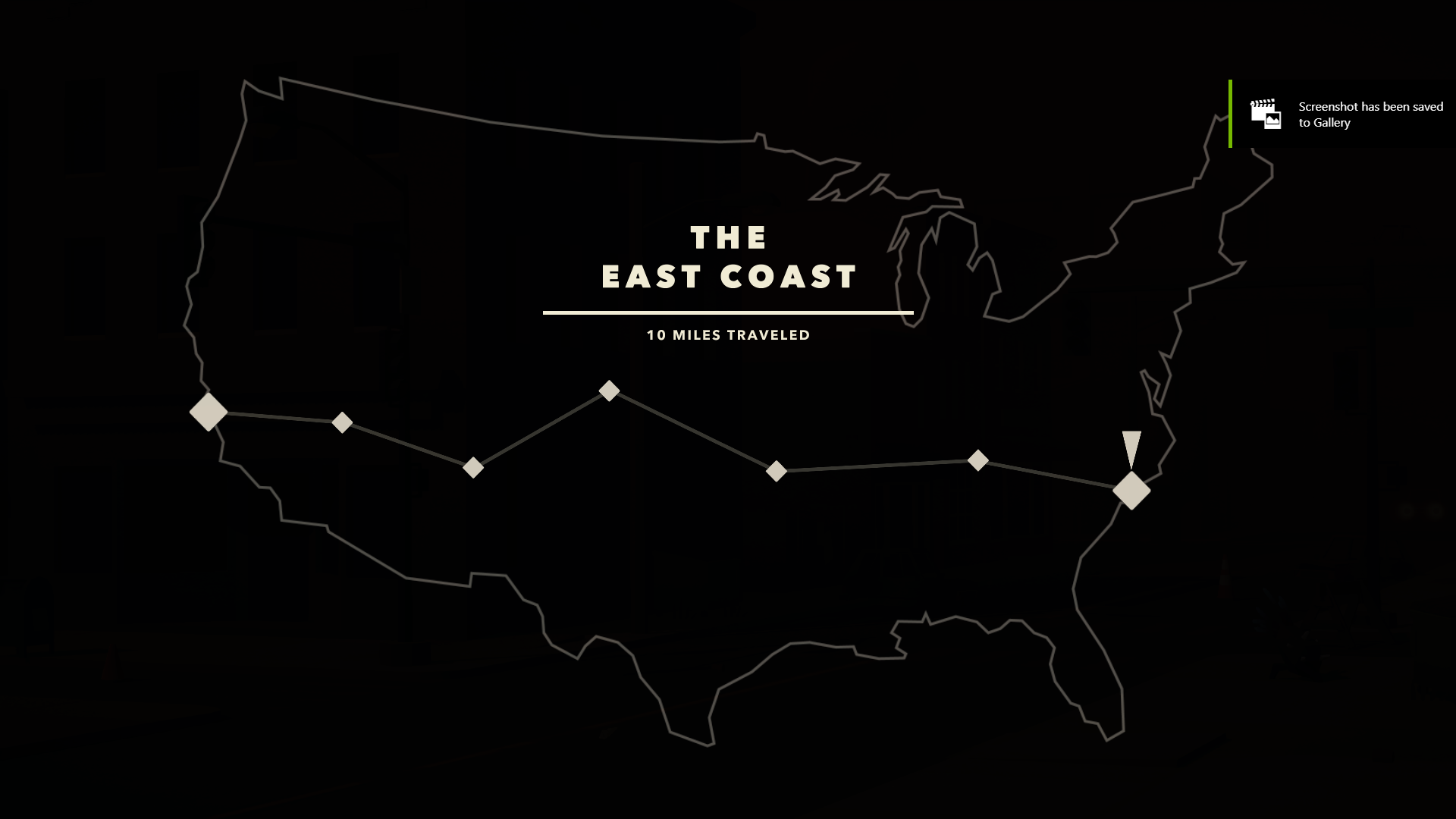 There's not much of a story to speak so am wrapping this up with a quick surmise before segwaying to the gameplay.

Basically it's the apocalypse with some unknown life forms attacking the US. Your task is to basically journey from the east coast to the west for safety. On your journey, you find whatever survivors in whatever means of transportation you could gather while driving towards your destination. Since the mileage is long, you'll have to beat several sequences of levels. Each where you make pitstops to head towards the next location for collecting fuel, items, exchange with traders, etc. Each of them ending in a road-block marked in X. 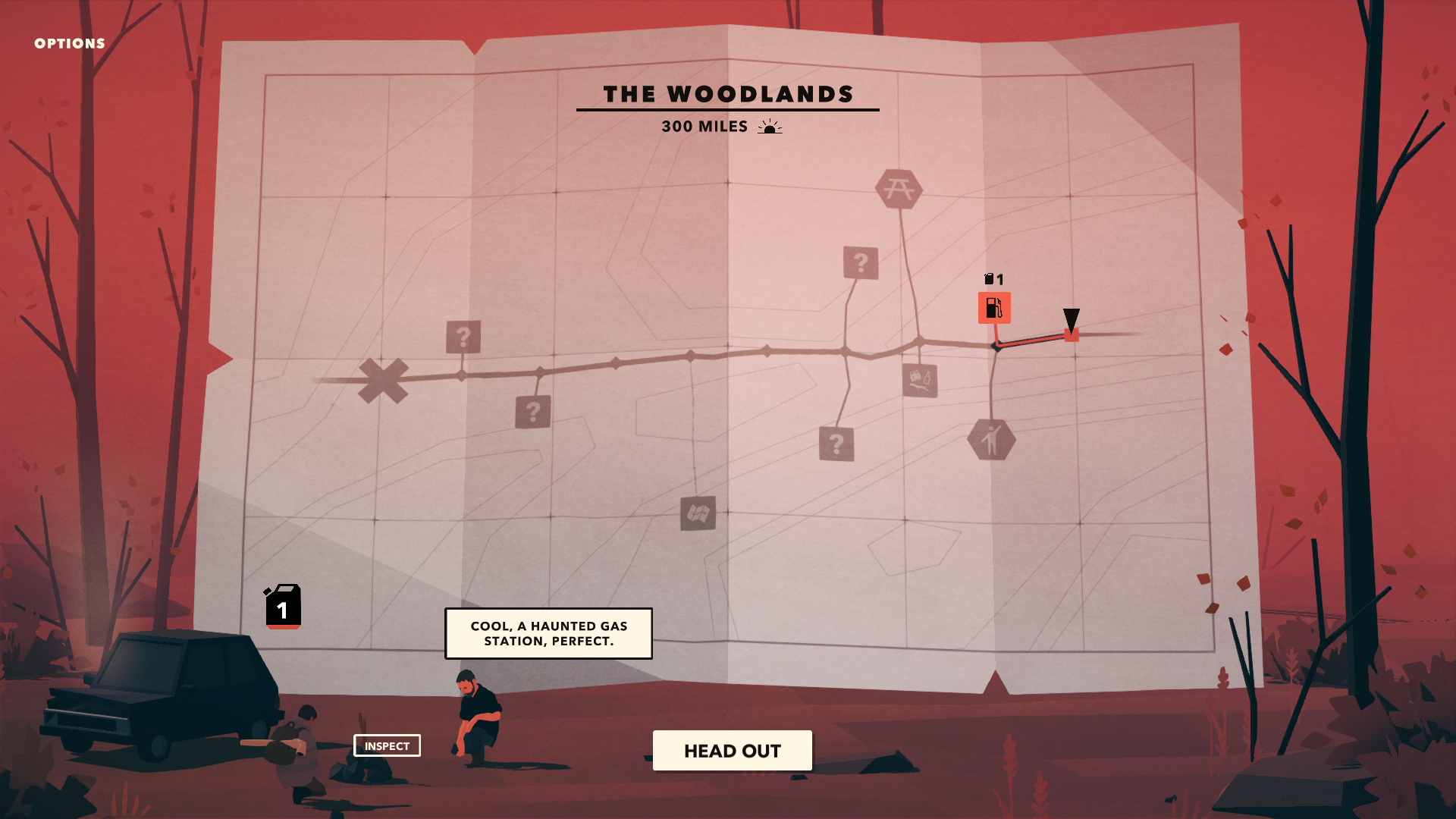 What seemed fascinating become frustratingly addictive before being just frustrating. I understand that to be a meatier roguelike, you have to remove certain hand-holding elements like item info or tips just so the player himself figures out how to use them. But, it made playing this game unbearable. Bad enough that in order to fully utilize, you have to go through some trial and error which already stymies your progression. There's the option of replaying the levels when you start new game at the levels you unlock after playing, but some of your badges(achievements) won't be redeemed. I browsed around and found a Gamepedia site with info on how to use them, lots of help. 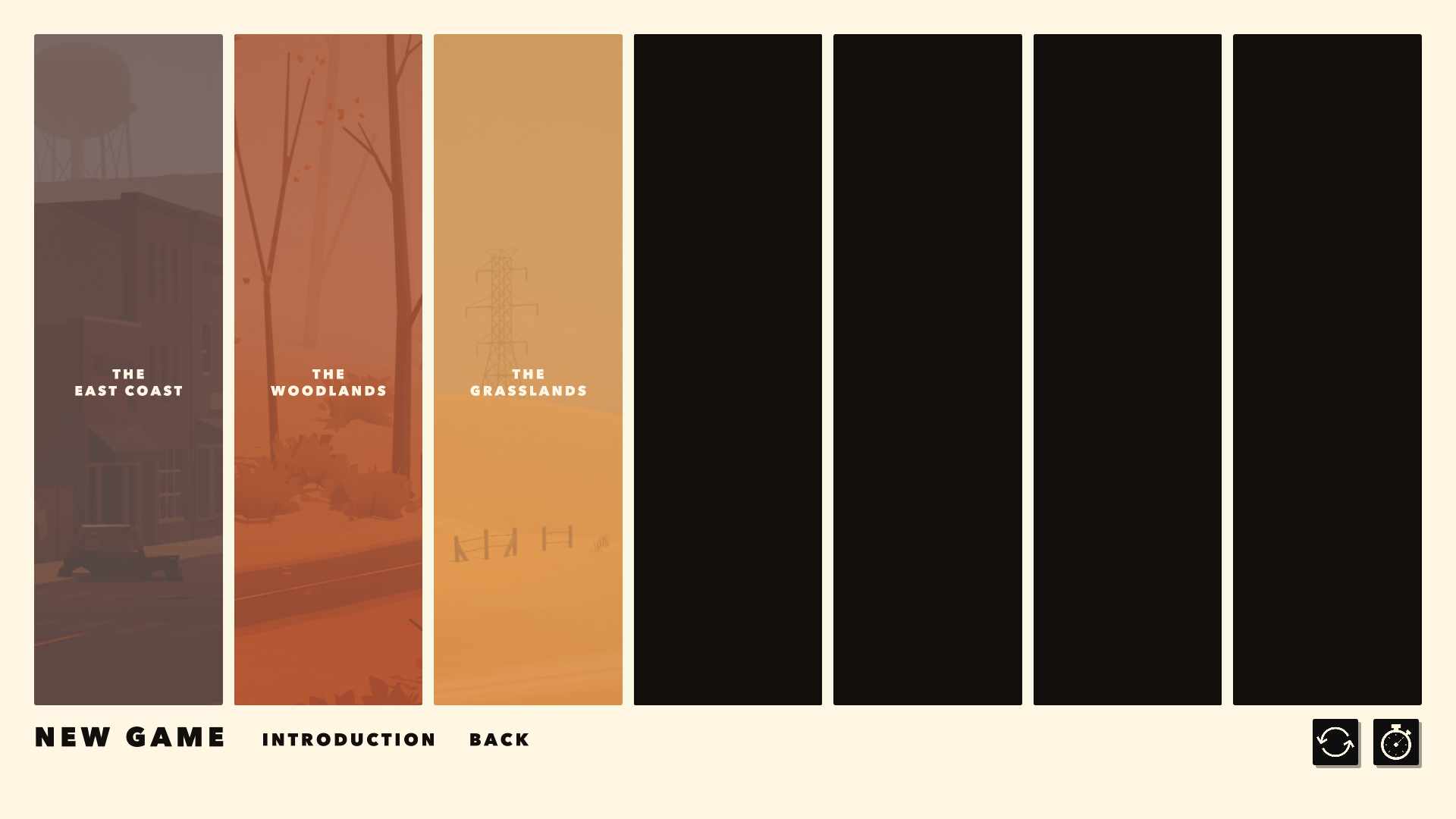 I said roguelike, what I meant by that is your characters are easily injured with one hit which takes away your action points leaving them with one, the second attack will kill them. This becomes the easiest way for the enemy to entrap you with less chance of healing without getting your other characters killed. If everybody is dead, you have to start the same area again with a new character and redo all the obstacles all over. Not even the permadeath element makes it any more enticing to continue playing.

There are a lot of obstacles to face, not only do you have different enemies to avoid but there are other unfriendly survivors to tackle before they easily steal your car, managing your fuel as you'll need enough of that to cross the blockade, finding more survivors(and dogs) to help you on the course, having the right set of equipment and there's the worst of all of them, night mode. Basically you're told at the beginning of each area that it's near dusk. Once the sun goes down, visibility is mostly gone unless you have a running generator which the enemy bugs will attack and it'll blow up or a flashlight. Though apparently the bugs can tell which position you are at in the dark. 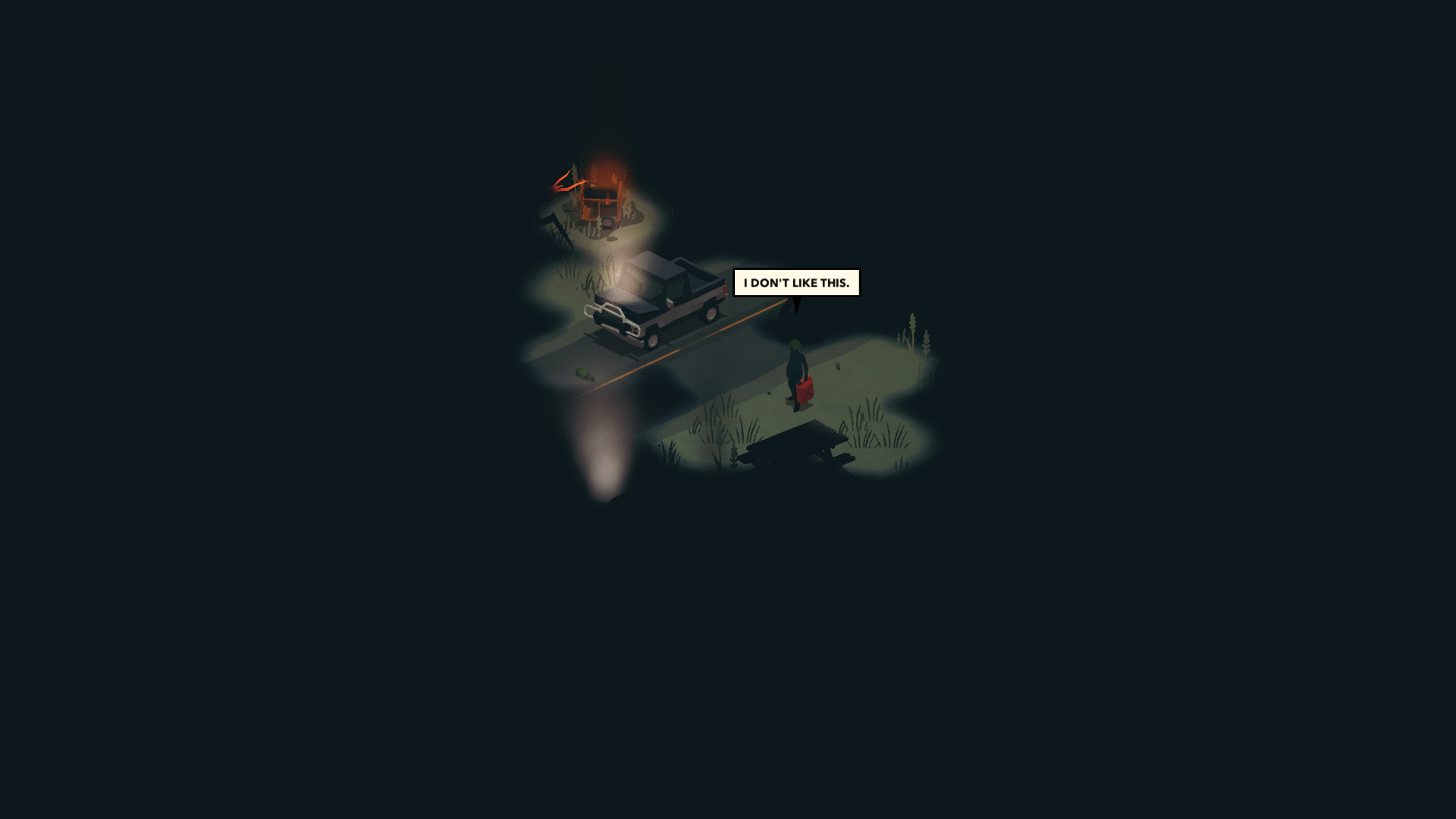 Using objects like a radio or flare to distract them eases things up....only for a little while. Before you start attracting more bugs in the area which burrows above. It's already infuriating when you kill them, more comes burrowing back to hunt you. Attacking them does you no good.

It was easier for me to just play with the restart level option, not having any regard for the badges I'll earn. Some of these gameplay designs feel contrived just to frustrate you into quitting this game, not because of the difficulty but the fun gets sucked out in the mid and late stage of the game. There's not much variation once you progress much further. 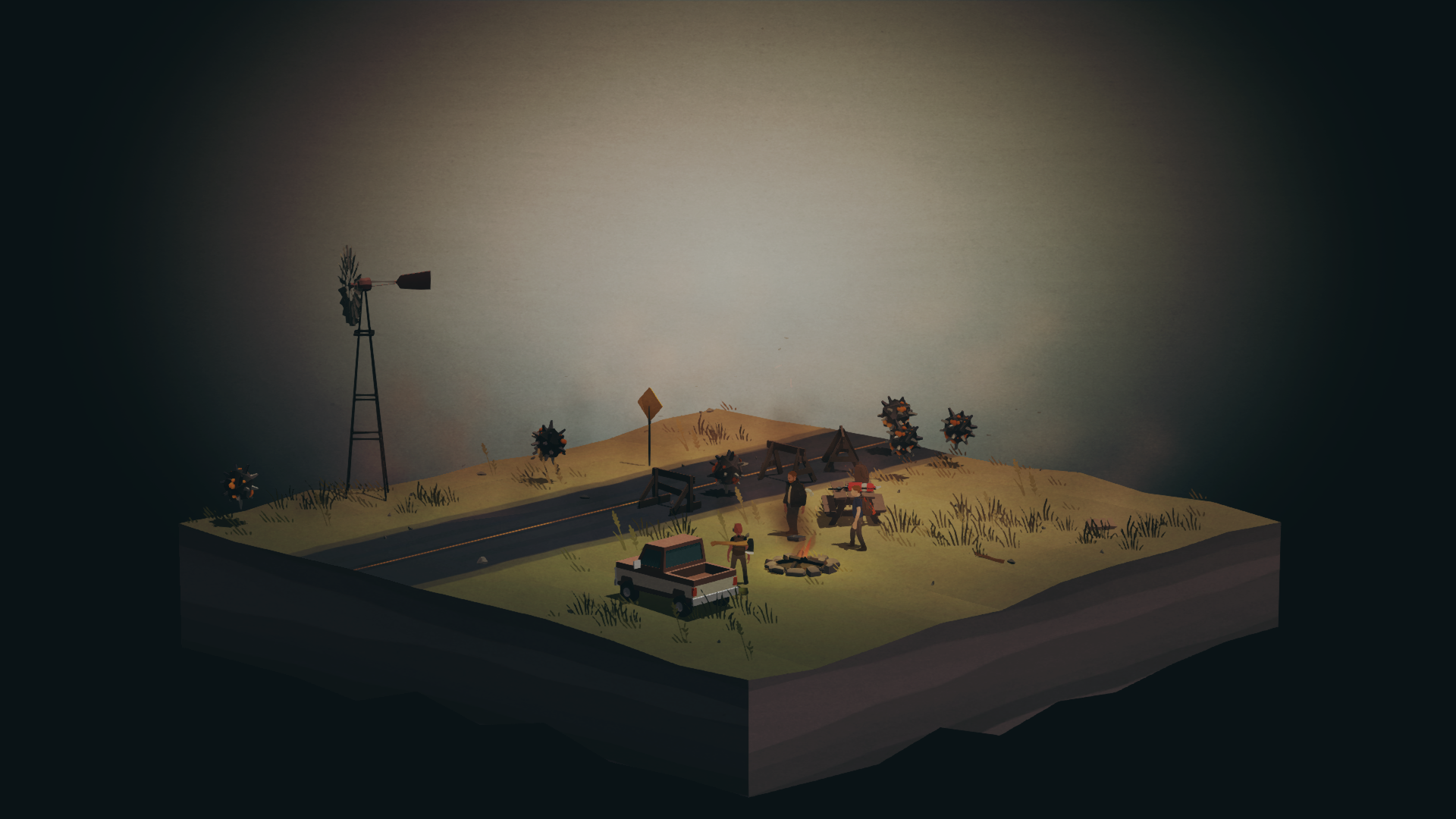 Overland is a good looking game, emphasis on 'good' because that's all it has going for. The environment and character assets have this minimalistic look but with small touch of details like nose bridges, dog snoot, pebbles, different color ranges of grass on ground and skidmarks. Everything has this less glossy look that is similar to Kurzgesagt videos in YT.

That being said, it's not also demanding for an indie title. The game ran superbly without performance issue and rarely saw a bug or technical glitch.

Sound design is average, there's nothing that remarkable especially when everything you've heard from your 2hr play session is similar afterward with little variation. Much like this game as a whole of course. Not that it's underwhelming but these are similar to something you've heard done by dozens of other indie games with little discrepancy.

But I am interested in the music score, there's this Blade-Runner esque synth production coupled with rigid tearing and heavy industrial metal compositions. It also has country music put into for more serene and somber feel. The soundtrack is varied and for someone who listens to various music of sorts, this piqued my interest, especially some of the tracks being so intense that it's little overblown for this game. Like at times the music doesn't fit when you're playing.

From what I've heard, this title was in Alpha before and seeing the state it's in now, pretty disappointing since it made little difference compared to its early version.

But does the game as of now stands on its own feet well enough? Nope. Not to me, especially with how difficult and annoying of a turn-based game. I've yearned for a game like this since Into The Breach and FTL. But while the concepts have luster, the execution leaves more to be desired. 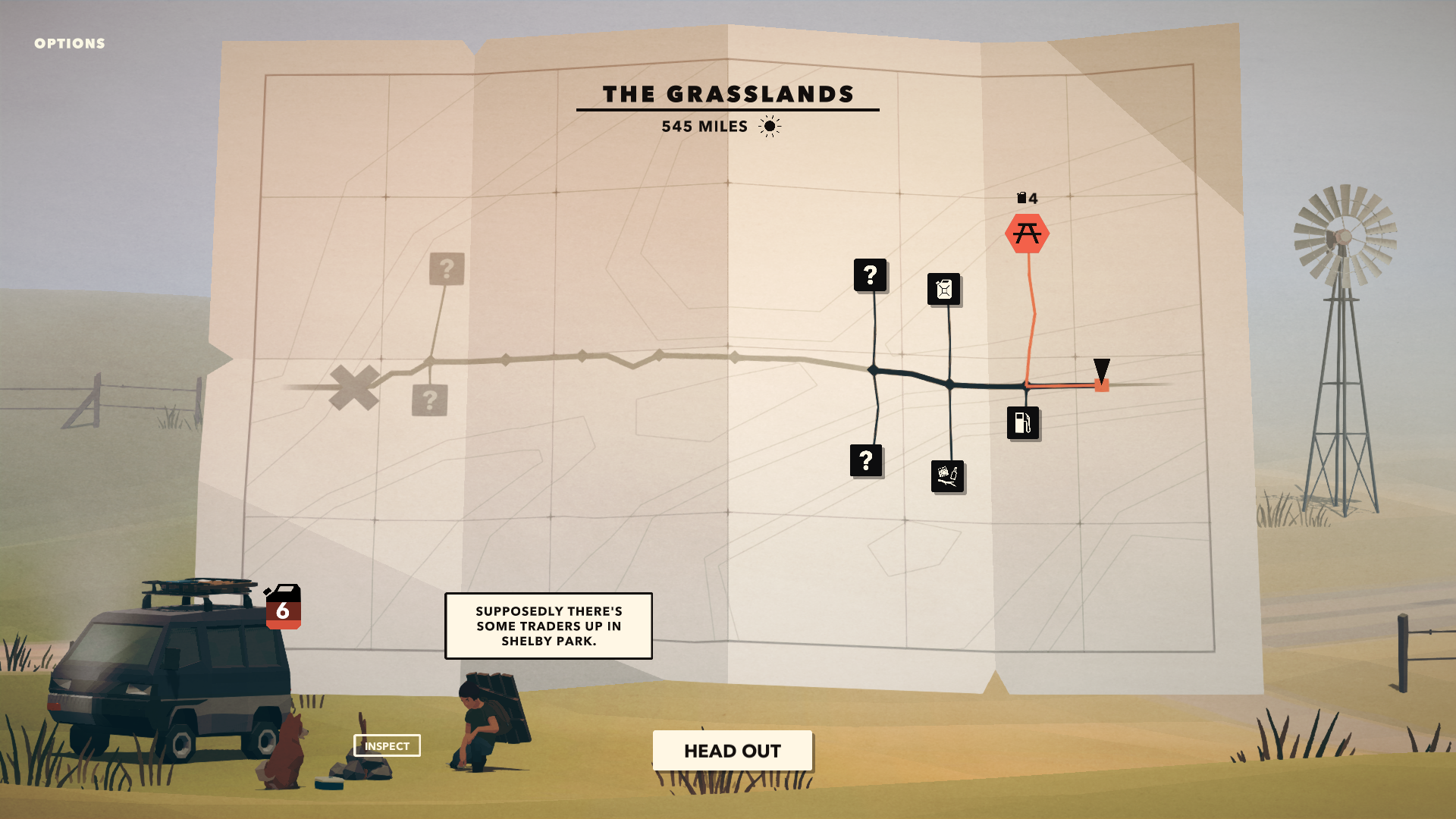 And then to add something really egregious is the cost of the game, this is fitting to be at best a mobile game. Something that'll gain more traction in that market than it'll do for major platforms like consoles and PCs. The full price for this is 25 USD at Steam and that is not even close to how much it is actually worth.

Definitely do not pick this up unless you're a glutton for punishment.