The Trending page is burning 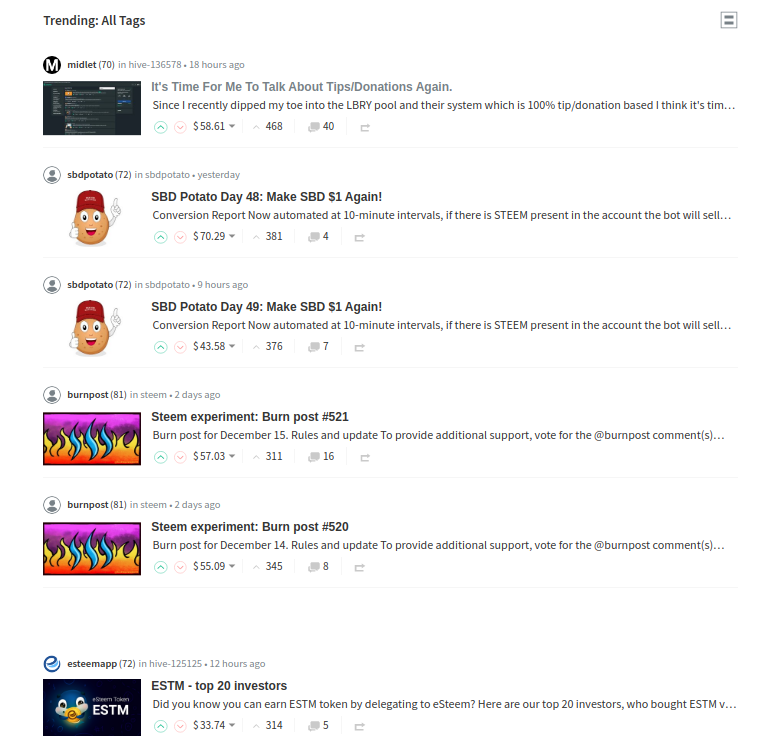 Let's be honest guys, last hardfork has solved some problems at the steem blockchain. We managed to get rid of the major bidbots, famous abusers and other blockchain squeezers but...

Conversely, some of the Bidbot owners have become curators, which is nice despite I don't notice them lately, surely because I am not the best content creator around however I am a really committed member of our steem blockchain.

At the same time, the trending page has become a sort of very weird place where the most successful posts are related with the STEEM BURN, in order to create scarcity, and a SBD Potato initiative which tries to increase the price of the SBD in, again, a kind of experiment of doubtful output.

I did not checked carefully what both initiatives are really doing but I believe that both are positive and can help in a very small fraction on the STEEM and SBD prices so, I am contributing from time to time specially on BURN POST by tinylly upvoting once a day a couple of comments there.

What is crazy is to discover that these posts and respective comments are being automatically upvoted massively by most of the so-called big curators!

Big and very well known accounts, including some of the best witnesses of this blockchain, have set their automatic upvotes focused on those posts and comments.

I have checked the activity of some of them, and believe me when I tell you that, the ones I have checked, are only upvoting BURNPOST and dedicating the rest of the time only on DOWNVOTING.

What about CURATING others who still are active and generating content?

Seriously you think that by only burning steem we will fix anything?

What do you think an investor can see while checking the trending page?

Burning some "spare" STEEM may be a good idea but I believe there better options from which all the steemians can be benefited as well as, for instance, the better distribution of STEEM and a much better image for the external viewer.

My advice for those Burning curators, as I said there are famous witnesses as well included, is that we should try to support the activity and content creation on the blockchain and not only on some theoretical "artifacts" that can help in the short but not on the long run of the project.

You have used the Hashtag #[CC] and can now reward 118.0 comments under your post with one CC.

Now newsteem starts to show how it will only actually help the big accounts, and they will control the trending pages with whatever..

I don't notice them lately, surely because I am not the best content creator around

You don't have to be one to have ex-bid bots upvotes. I've seen quite lame posts getting upvoted by such. I guess they simply upvote posts randomly nowadays or have a few favorite users not bothering to discover others.

The trending page hasn't changed a lot. No more paid votes, but as you said, just a few types of posts from the same users that appear over and over again. I don't even care about that sbd potato and burning steem initiatives.

Let them burn theirs, I earned mine hard. I really have no clue how the price of Steem will ever recover. It has $317,428 in daily volume. That's very low.

Steem really needs to change something in order to attract investors. People with lots of money check projects before investing massively. It's sad that a blockchain with so much potential has such a undervalued cryptocurrency.

No promotion no visibility

Promotion isn't going to help, the vast majority of those who spend any significant amount of time on social media sites already have been there and done that with steemit and left spreading by word of mouth how the place is set up to operate like a ponzi scheme.

Why attract investors when the same people can just keep appearing on the trending page patting each other on the back while making what satisfies them....they don't need investors to make money.

I'm going to sound really stupid here--but I see the enormous amounts of Steem the big whales own. This coin is now worth $.12 or $.13. Think of the value they'd have if the coin rose to $2, $3 or even $6. Devaluing their investment through bad practices is like a farmer eating next season's seed. Makes no sense to me, but then, I'm not good with money. I'm just a 'content creator'. I have fun here and I'd love to see many more people join the blockchain. Unfortunately, people join and drop out because they are simply ignored. Not even talking about rewards. They get no notice, so there is no incentive to continue.
Sorry I latched onto your comment, but you seemed to make sense, so I put in my own 'two cents'.
I'll Steem on as long as the platform is here.
Have a great day.

Having fun is essential but people look around at what rewards others have and get disappointed when they don't get attention. It's human behaviour. I doubt any influential account in here would still be around if his blog would have been constantly ignored. Have a good day!
I'm going to bed in here 😴.

Too bad this post will never see the trending page... with steemit inc printing 80,000 steem a day those stupid burn posts are useless.

Exactly, the effects of the burning are so tiny that are useless

It looks like scammers. Just like it did 2 years ago. We did not get rid of bidbots or the abuse. Only thing that has happened is limiting the use of bidbots by average users. The big steem hodlers are still abusing the system and I would argue more than ever before. Individuals need to use common sense and think about what the motives really are.

I only got like 1 or 2 upvotes from ex bid bots..
okay.. I often post in german, but not mostly.

!BEER FOR YOU TOO!

Hey @cflclosers, here is a little bit of BEER from @toofasteddie for you. Enjoy it!

With a curation window of 1 minute content discovery is almost impossible. So the only way for getting curation rewards is to choose a list of accounts that usually get big upvotes and set a bot to automatically vote for them. @sbdpotato and @burnpost are perfect for that, because those accounts:

1) Receive big amount upvotes = big curation reward
2) Create a lot of posts and comments on a regular basis = allow spending all the voting power you want.
3) All the posts are exactly the same = more constant revenue

The burning does provide a certain value to the blockchain as it reduce the inflation. The real problem is that the created value is (IMO) far less than what could be achieved with better reward distribution to users + better trending page. The current trending page is not really better than that it used to be with bid bots. I honestly think it trending had more variety and better posts before EIP.

At the time I constantly advocated that SMT development + a treasury system should take priority over everything else. At least let's hope for the best in the future.
!trdo

Congratulations @vimukthi, you successfuly trended the post shared by @toofasteddie!
@toofasteddie will receive 0.08532338 TRDO & @vimukthi will get 0.05688225 TRDO curation in 3 Days from Post Created Date!

Agreed. This is a highly exclusive group doing the lion's share of the upvoting of the sbdpotato and burnposts. They could easily bury the large votes in the comments and not bump this shit up to trending.

People keep talking about how burning helps the economy...

Sure...at the end of the day, they all trade into the trillions of USD. Makes total sense. How about put those STEEM to use?

Stellar burned a large number of their tokens and it did jack crap for their project.

Powering up is just as effective as burning.

For anyone who is small potatoes, but does not like what he/she is seeing, there is a way to make your presence felt: Remove from your witness vote list all witnesses who are not actively supporting posters. If we all support those who support us (which is as it should be) and we ask everyone we know to do the same, it just might convince a few to change tactics. Even if not, at least we will have shown our disapproval without having to take the extreme action of leaving steemit.

I do practice what I preach. I cancelled all the witnesses I had voted for and have asked, if anyone is certain a witness does not favour curators over posters and has some doubts about funding flags, let me know so that I can vote for them.