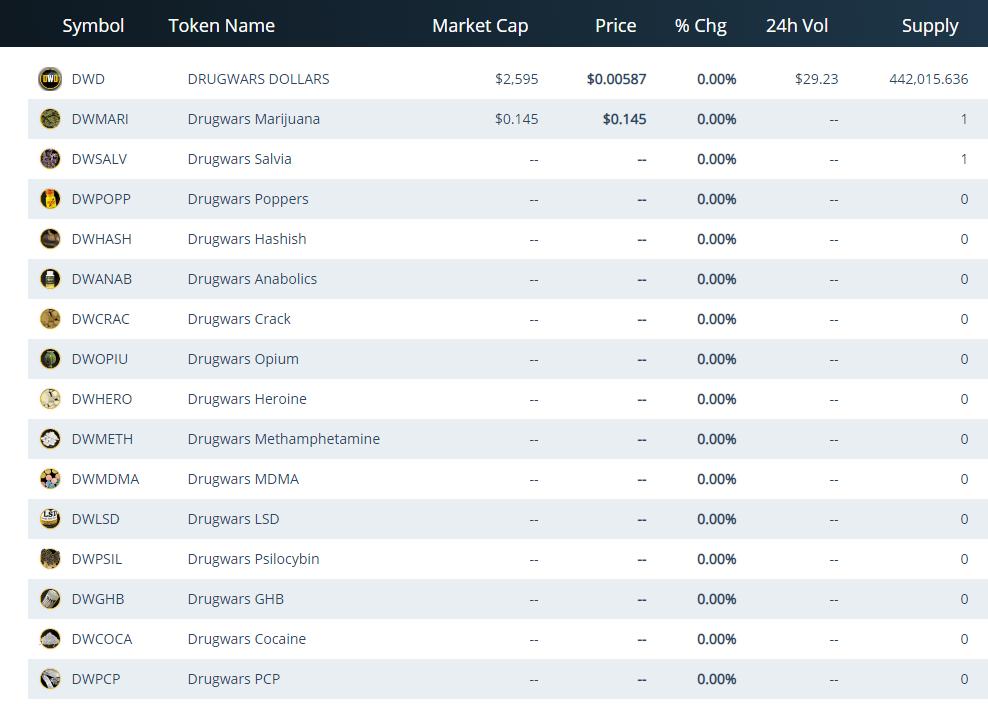 I keep playing @drugwars despite the criticism.

I think they are doing a great job developing a game that started being super simple and that every week is improving like good wines do.

I will not say that it is excellent but I recognise the team's effort and enthusiasm for continuous improvement.

I also believe that it is still a gateway to the blockchain steem as they continue to attract new users to the game from other platforms such as Facebook.

When these users realise that behind the game is the Steem Blockchain, the next step is to open an account on steem.ninja and thus be able to enjoy the tokens received.

Taking a look at steem-engine I have noticed something incredible coming from @drugwars, they have created 15 new Steem-Engine Tokens all related to the game and therefore, with drugs.

And it seems that our "gang" is not only going to be nourished by generic drugs, alcohol and weapons.

It seems that they are also developing a token for each type of drug needed by each resource.

So let's be ready for a huge update soon on the game.

In my opinion, the developers @futureshock of this game have been judged very badly.

I believe that their decision not to continue using the Steem blockchain to contain the basic dynamics of the game was completely necessary because, although STEEM blockchain is one of the fastest in this technology, it is not enough fast to contain such instant processes.

However, all the "battle" data is still written on the Steem Blockchain, so it is not fair to say that this game does not use the Steem blockchain.

Possibly, @drugwars is one of the few Apps that use STEEM blockchain and continue to develop its product at a good pace, despite the bad times we all are suffering here.

Guess I will have to login once more :)
!BEER

Don't expect a huge change now but what is good is that they keep working hard!

Hey @toofasteddie, here is a little bit of BEER for you. Enjoy it!

I too sometimes enter to play, they have been doing great job.

I think they have developed something cool. But the more features they add, the more complex the game gets. I used to like it for its simplicity. Now less so

People like complex and detailed videogames usually, so this is good in some way.

FINALLY the illicit futures market but in virtual form like @inertia coined when i brought it up, he more so asked it like "You mean illicit futures market?" when i asked why there's no darknet exchange inertia wasnt talking about it he just responded to me asking about it in voice chat years ago.....but its an interesting concept since everyone knows about silkroad.... people have markets but not like futures where you can bet on the price of cannabis or drugsbecuse they have no standards and whose gonna go check for quality? A DAC thats who will check for quality and the quality checks come at the market themselves the best decentralized darknet markets will have built in Quality control, with a board election like telos has, with arbitrators leected hah

i just thought of something funny, darknet amazon haha standardized illegal drugs are NOT that hard to do you just test kit the drugs and use decentralzied drug testers and vnedros will be known for only selling stuff in special units, that can bemeasured and quatified and peopel can trade the prices

I believe that their decision not to continue using the Steem blockchain to contain the basic dynamics of the game was completely necessary because, although STEEM blockchain is one of the fastest in this technology, it is not enough fast to contain such instant processes.

What are you referring to here? It’s still on the Steem blockchain. You cannot interact with the sidechain without going through Steem.

Yes, I know but, as far as I remember, before implementing the current solution, the use of the Steem blockchain was much more required by the game and, as a result, it was extremely slow.
Some operations are currently performed out of the blockchain and that's why some say that @drugwars is not anymore a DApp built on top of the Steem Blockchain.

The latest hardfork relaxed some of the restrictions on custom json operations. If they take advantage of this potential expansion, it could translate to better performance.

Your post was upvoted by @steem-ua, new Steem dApp, using UserAuthority for algorithmic post curation!
Your UA account score is currently 4.246 which ranks you at #3032 across all Steem accounts.
Your rank has not changed in the last three days.

In our last Algorithmic Curation Round, consisting of 100 contributions, your post is ranked at #16.