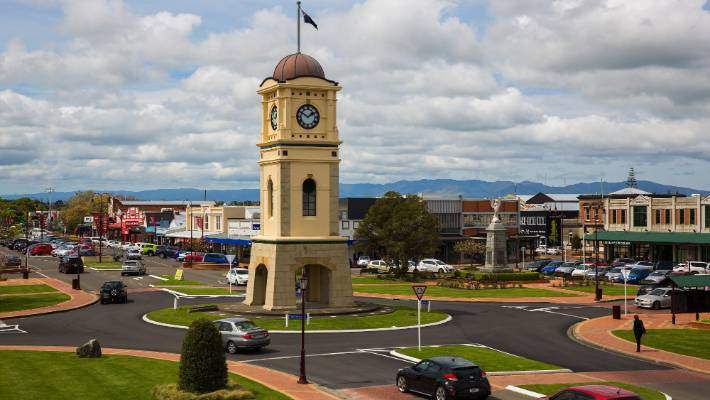 If you've travelled new Zealand, you're probably wondering why I've skipped out lake Taupo. It's a huge lake slap bang in the middle of the northen Island and a popular tourist attraction.

So why did I skip it? Well to be honest, the weather was terrible and even though we had a car, there really wasn't much to do. Sure there was a nice waterfall and an expensive, not to mention dangerous speedboat ride down river but honestly on a cloudy, foggy day you can barely see the lake. The best thing for me there was the toilets. I'm not kidding, the wonder loo is a must visit. Seriously it's a lifesaver on a day like that! It's even got it's own receptionist as well as heaters and showers. A backpackers dream lol

This place in particular is worth mentioning just for the sheer weirdness of the experience. It's won awards for the "nicest" town in New Zealand (14 times) and when you arrive you can start to understand why.

First off there's the location. It's located on the North Island, just North of Palmeratone North. But for me, it was on the way ti my next main stop, Wellington.

When I drove there, I couldn't imagine anyone living nearby at all. It was simply a long, windy and empty road surrounded by forests and signs of logging. I didn't see another car on the road, not even small houses or farms which are normally a sign you're getting close to somewhere. Nothing

Even though I was following the signs, I was conviced I was going the wrong way, but all of a sudden I arrived...

I took this pic whilst simply crossing the road. Skills 😉

Have you ever seen the film The Truman Show Starring Jim Carrey? If not you should watch it, it's one of his better films.

This place reminded me of that film. As you enter the main square, everything just seems so neat and tidy. The grass is finely cut, the roads are really smooth with clear non worn lines and markings. The paint on the roads and buildings looks fresh, It's quiet, calm and just doesn't seem like a real place where people live. It felt like I was driving through a movie set, not an actual town. Everything in the center seemed symmetrical too, the only thing that seemed out of place was the town itself!

Most towns and cities have a park, or somewhere you can escape the noise and comotion but here, there's simply no need.
I was amazed to see a subway sandwich shop there which I had for lunch. Sub of the day with a free cookie, yes please!

It trully does look like a "nice" place but when you step out of the center, like most towns it's not as fancy however the difference here is extreme. Walk about 2 minutes out and all of a sudden that nice smooth, freshly painted road I was talking about just disappears. All of a sudden it was like being in a western movie. I'm surprised someone didn't step out ahead of me with two Magnums (Revolver Pistols). I came across what looked like a welcoming bar....

What else is there?

Apparently there's a race track in fielding. Straight away I thought of horses, but no. It's a proper F1 race track called Manfeild circuit. I'd actually heard of this one before but would of never of guessed in a million years it was near this quiet, peaceful town. I guess it's not so quiet when big championships are on..

The Animal Auction Facility
I visited this place while I was there, it's literally a five minute walk from the center of town. It's a huge holding area for cattle to be sold to farmers across the land. Cruel you might say, especially if you're a Vegan or Vegetarian. Despite this, it's quite an interesting place to walk around.

Image Source
While I was there, it wasn't busy and was out of season. But the many empty holding areas confirmed just how much cattle is hold up there. It really is an eye opener.

That's all there is, at least from what I know anyway. What did you expect from a place so little?

But there's a few more surprises for those of you that have bothered to read this far, and some of you may of realised that I try to save good experiences/places or pictures for last.

Here's a few snaps from some unforgettable short stays making my way south.

I'm not a huge fan of hiking, but with a view at the top like this, it's worth it.

Of course it wouldn't be a successful post without one of my sunset pics. And i promise you there is no filter what so ever here..

The next destination on my travels was where I was heading. A place I ended up extending my stay after discovering some little gems...Wellington

Thanks for the description of the town and the photos. Interesting knowing how people on the other side of the Earth are living. 😎

PS: Why not share your blog posts to your family and friends with the convenient sharing buttons on TravelFeed.io?

According to the Bible, Why was Jesus Christ baptized despite being sinless? (Part 2 of 2)

Hiya, @LivingUKTaiwan here, just swinging by to let you know that this post made into our Honorable Mentions in [Daily Travel Digest #755](https://goldvoice.club/steem/@steemitworldmap/travel-digest-756).