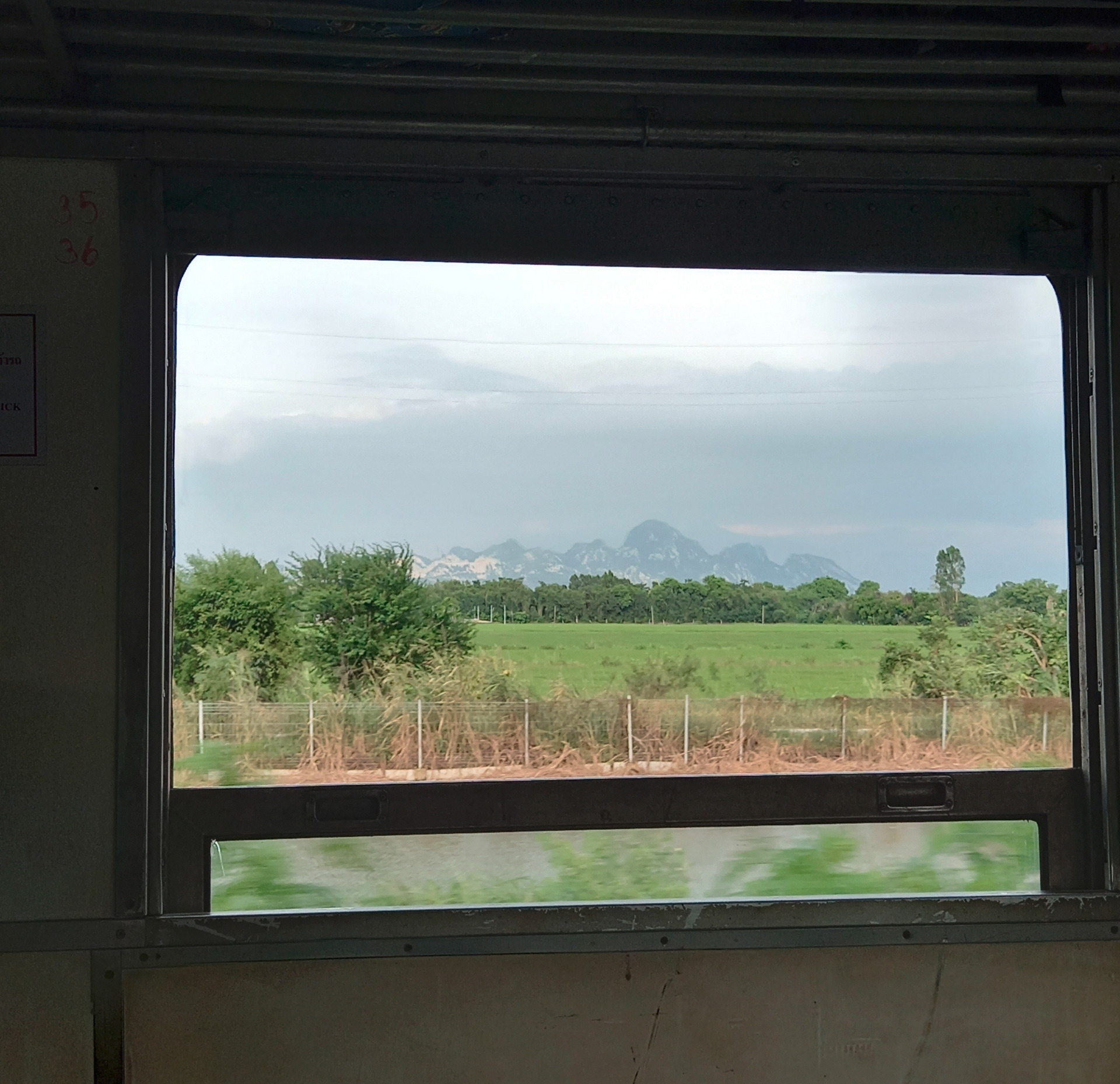 I knew I wanted out. Out of my condo. Out of the city. Out of my old life. I had fallen in love. With a bar girl no less. Tariv, which isn't her real name, had been clear in no uncertain terms either; she wanted out too. So you see dear reader, on top of a hangover and feeling crushed over losing my job, I was also nursing a broken heart. But this is a story for another day.

It is in that frame of mind, however, that I boarded the train that had just arrived. With both my bags still on my shoulders, I stumbled my way to my seat. I settled my backpack and day bag on the luggage shelf and sat down. The wagon's comfort level was on par with most of the public buses of the capital. Its huge open windows, however, held the promise of a much needed gentle breeze on my weary face.

There are different types of trains that service different stops along the Northern line; some are fast, some are slow. Much to my delight, the one taking me to Ayutthaya was on the slow side. It gave me the chance to step out of my thoughts and observe the landscape scrolling through the window.

The trip lasted about 1.5 hours. As I disembarked, my umbrella, which was tucked in to the side of my backpack, found a way to hook onto the handrails of the departing train. I managed to wiggle my way off it in extremis. Even though I had only been dragged for a little less than 30cms, my heart was pumping.

I sat down for a second to gather myself, and proceeded to exit the train station.

As mentioned before, with a situation as fluid as the one created by the Covid-19 pandemic, my chances of securing another job were slim; my days in Thailand were numbered. I had registered, through the official channels made available by the Australian Embassy, my expression of interest to be repatriated down under. The Consular had announced via Facebook that they had arranged flights on Thai Airways from Bangkok to Sydney. A flight every Sunday was scheduled until the end of the year.

I received an email from the Consular prompting me to either add my name to the waiting list, or to ignore this email until the next one in two weeks; I ignored that first email. I needed more time to live my last adventure in the land of smiles.

Though it felt like my days in Thailand were numbered, I was not about to give up without a fight!

My strategy for my time in Ayutthaya was simple:

* book an accommodation within walking distance of the train station, * deploy a bivouac to job hunt during business hours on weekdays, and * visit the little city on the weekend.

Booking via Agoda, I settled on the Il Treno Hostel, and deployed my bivouac on its balcony overlooking the main strip.

I did not venture far from my hostel on the first night. Nor did I experiment with the variety of food available; I am quite conservative when it comes to eating. Instead, I found the nearest noodles stall and settled for my favorite Thai noodles dish; braised pork and noodles in thick soup. The food was delicious and I ended up ordering two bowls.

The owners of the stall are a married couple with a teenage son. That night, the mother was working the stall, taking orders and cooking. The father was standing nearby sipping Thai whiskey. He offered me some, which I politely declined; I was not in the mood for hard liquor. As I ate, the son was trying his best English at making conversation with me. At 15 years old, he was already smoking cigarettes and even gestured with a mimic of a bong that he was the champion of smoking weed too; I begged to differ.

On my second day in Ayutthaya, I started to liaise with recruitment agents in a bid to find a new job. I soon realized that I was ill-prepared to answer the question of why I was let go from my previous job. My strategy so far had been to explain that the decision felt like a win-win, and that they could contact my referees if a detailed explanation, in a jargon that they would understand, was needed.

A wake-up call came from a senior agent of British nationality who broke it down for me; the more I pushed around that narrative to an already small circle of recruiters for my industry, the bigger the chance of a hit to my reputation. "It has a chance to fester. We need to nip it in the bud!" as he put it then.

On his advice, I took a step back. To clear my mind, I decided to take the rest of the day off and visit the surroundings. I ended up at the ruins of Wat Phra Si Sanphet. In the old Kingdom, when Ayutthaya used to be the capital of the country, Wat Phra Si Sanphet was the holiest temple on site and exclusively used by the royal family.

Reading the history plaques interspersed amongst the lush greenery and the hundreds-of-years-old statues leaves no doubt in a visitor's mind; The Kingdom is powerful. The Thais are a proud people, and with reason. In all of the country's history, they have neither been conquered nor occupied.

Next to the ruins is a Thai Buddhist temple. I made my way inside and spent about an hour cross-legged, sometimes gazing at the architecture, sometimes observing pilgrims make merit.

After a few more hours of wandering about, I had cleared my mind.

One other thing was clear to me; I was homesick and missed Australia.

View this post on TravelFeed for the best experience.
backpackingtransportationtraveladvicedigitalnomadsjobhuntingcovid19coronavirus

Wow, sounds like you have quite a trip ahead! Are there many domestic tourists now or do you have the place pretty much to yourself? I have to admit I'm a bit jealous, last year this time I was traveling in Thailand myself and now I'm in Europe under lockdown.. Where are you planning on heading next?

Congratulations @tobatunaornot! You received the biggest smile and some love from TravelFeed! Keep up the amazing blog. 😍 Your post was also chosen as top pick of the day and is now featured on the TravelFeed.io front page.

Thanks for using TravelFeed!
@invisusmundi (TravelFeed team)PS: Have you joined our Discord yet? This is where over 1000 members of the TravelFeed come together to chat. Join us!