A story of a Keen Quen 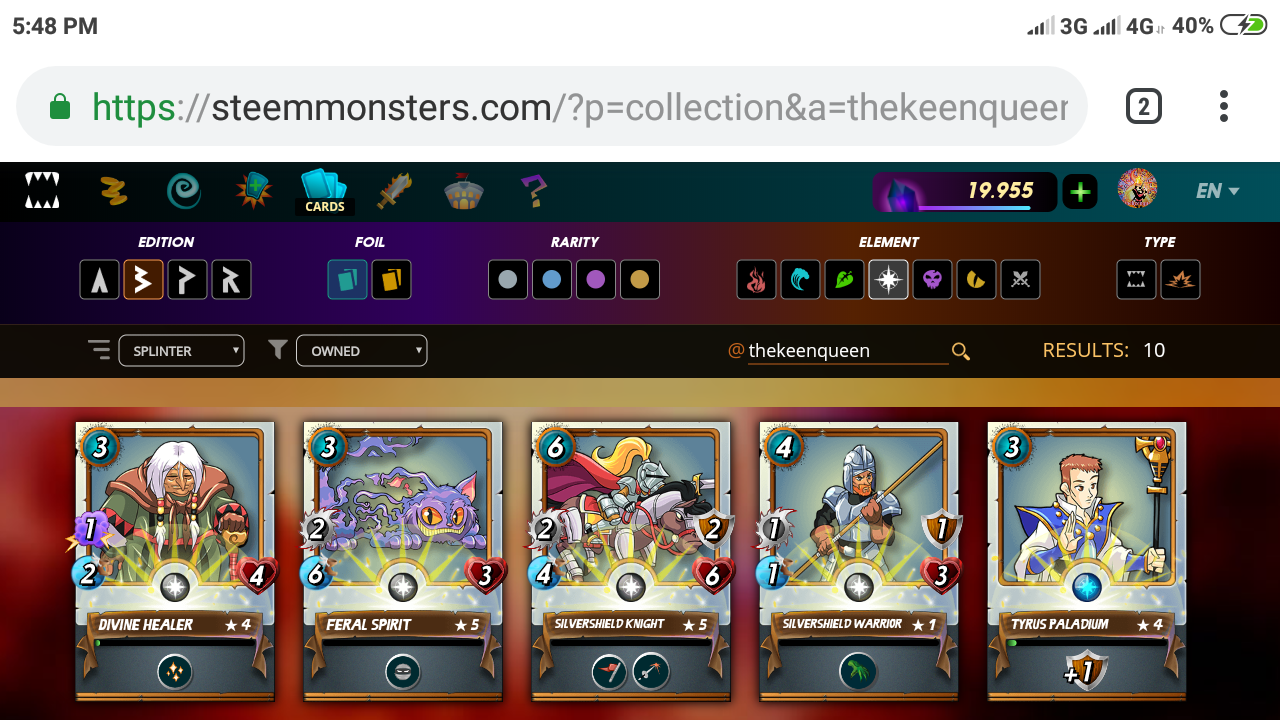 I have been playing Steemmonsters since October 2018, a week before the end of season 2, and I don't remember what season are we on now😂.

I am a deck of @teampossible. I got my name from @davemccoy, the one who plays my deck from the start describe her character in 3 words, Agile, Seeker and Keen. Then Dave comes up with thekeenqueen! I have sisters too, @thekillingqueen, @thegoodwitch and @thebadwitch. If you happened meet them on the battle field, you'd better watch out😁

I started with 5 cards only back then, Tyrus the summoner, feral spirit the sneaky cat, silvershield knight the inspiring fierce, clay golem the slow beast and peace bringer the ranger😎

Lucky that there were not so many players on the first 4 seasons where you can get beta booster packs as daily and season rewards, so I could touched down the diamond 1 with such monsters. No divine healer or air elemental, no defender of the truth or silvershield paladin too. No neutral, no legendaries.

Dave told me to have fun😂

the result of having fun is you will lose more than winning 😉 and I'm happy about it.

I met all those players who are now on the top 100 players on the leader board in the past, just to see how the champion's league player slashes out the gold and silver league players. I think it was happening during the Steemfest 3, before the game founder change the rule and create reward cards as daily and season rewards.

I came up with so many stupid questions about the game and My Coach answered all the questions patiently. I thought that if I skip the result once after I click on rumble I would win easily 😂🤣 I didn't know about the rule set and mechanism. I didn't understand the monster's ability until I learnt it from the long lost battles. All I know is the name of the monster's.

I kept playing with those 5 cards till Dave put some other 5 cards for each splinters (I wasn't even started with a starter deck😂🤣). I got a help from my fellow in teampossible too, @johndoer123, He let's me play with his elemental Phoenix and fire demon for a few days to complete the fire splinter quest and I fell in love to Phoenix ever since😄.

I play steemmonsters seriously, almost 8 hours a day while cooking, serving the customers at our small shop, engaging on steemit and sometimes I skip my sleeping time just to rank up at the end of season to be able to get more rewards.

I play with a common and rare monster's kinda deck and level 1 except the 5 life monster's which level 4 until seasons 17😀 a month ago. I have a silver almost gold deck and still maintain long lost battle just to have fun.

Are you wondering what fun I get from losing in the game?

I considered this as practicing

You are the Keen Queen and super awesome... I'm so happy you are the Captain of so many and help spread your energy to make this game better for all!

Thank you coach... I still have some mission to make you proud of recruit, named and coaching me all this time.

awww... you have made me proud of you the whole time! Even before you joined I knew you were a star, and the way you handle things only surpassed my high esteem for you Cici! :)

Oh my goodness this is an amazing story @thekeenqueen. This is incredible progress and patience! You do all of this in the middle of owning a shop?! That is ridiculous. Loved the story resteemworthy for sure. I am excited for the game when people like you take the enthusiasm and other intangibles like this to a whole other level!

Thank you so much @cryptkeeper17, yes my Father in Law and I run a small coffee shop at the backyard, well it used to be a backyard, but since the house located on a hub, so we have 2 sides of the house that face directly to the street.
That's why sometimes I feel like I'm a boy's😁.. I stop playing when I'm taking my bath and sleeping. Thanks for the resteeming 🤗

Wow, Just amazing. We might clash someday. Maybe, maybe not. It might take sometime for me to reach your level though. Best of luck in your battles.