The Outpost, Three Generations Later and Still Putting Me Into a Food Coma! #fff 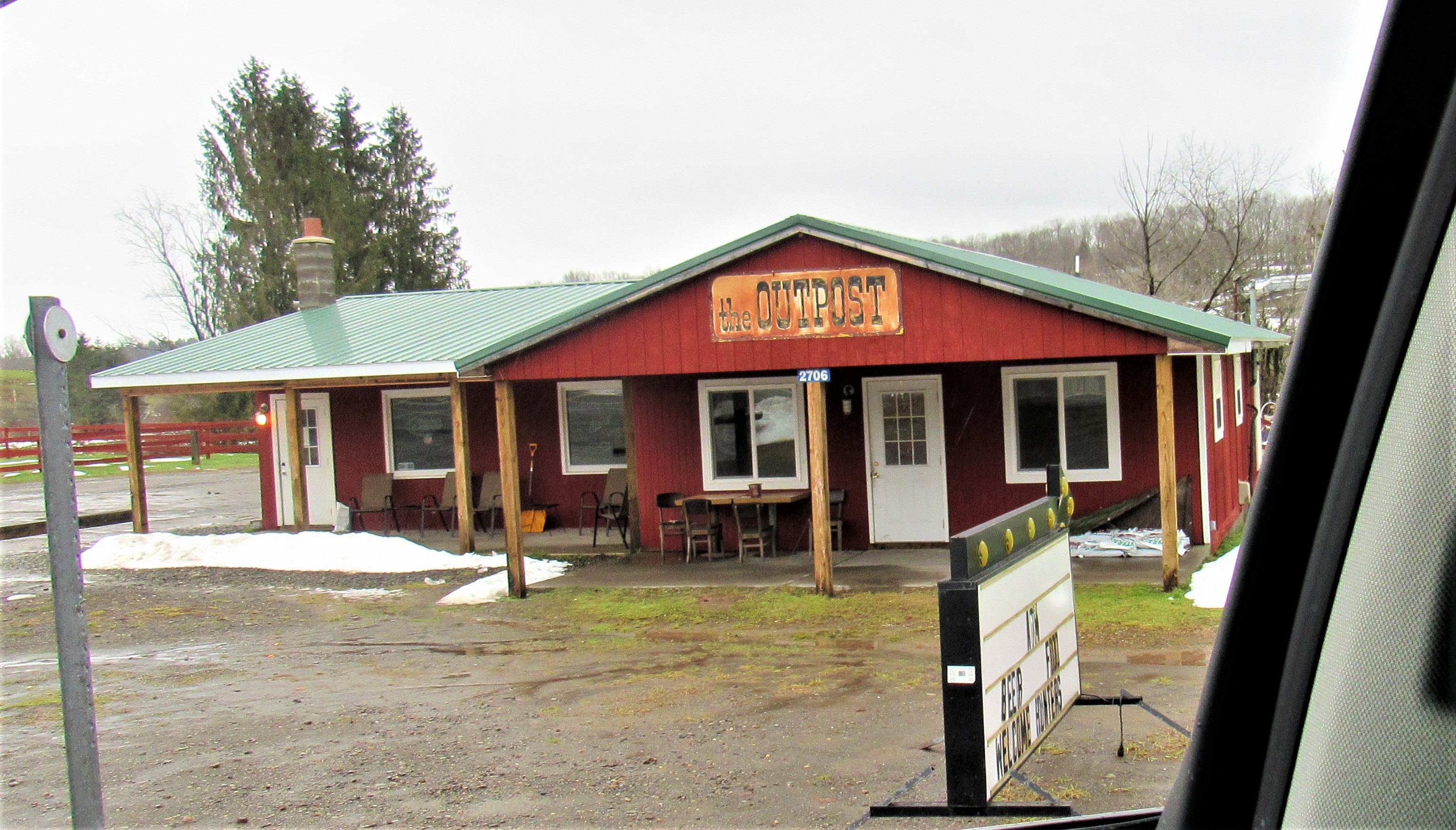 To the naked eye, this place looks like a dive. Well, the old saying never judge a book by its cover, fits this joint to a Tee.
The Outpost has been around since I started coming up this way 44 years ago.
Over that period of time, only three different families have owned The Outpost.

This was the place we would go for a hot meal and a cold beer back in the day.

The present owner added this picnic area. In the summer the guy throws some great pig roasts shindigs.
Music, all country of course!
Kegs, all cold of course!
Food, as much as you can eat, of course!
All kinds of people, of course!

Back in the day, for the first 10 years or so we camped out on our property in NY State.
We would come to our property but once a year, Memorial Day Weekend.

We had no running water. Well, that isn't entirely true, we did have a very small stream and a beautiful spring on the property. With lakes and rivers all around, water was never an issue. Hot water yes, cold water, all you needed.

No bathroom facilities. Well that isn't entirely true, we did have this beauty.
This is the original outhouse, built 44 years ago,

The only reason it's still around is because of the roof. The metal roof panel is made of zinc.

The first owner of the Outpost, I never got to know.

The second owner I got to know very well. His name was Homer. He was a retired ironworker. His forearms would rival Popeye's, after he downed a can of spinach.
We became friends while I was building our home.
When @farm-mom was back in Jersey, whenever I could I'd continue to bang some nails here in NY State. Needless to say, I was not as accomplished in the culinary arts as I'm today, so The Outpost was the place I would dine.
Still on the menu today is the famous Homer Burger.
Out of respect, the present owner Hank still offers the Homer Burger, named after the previous barkeep. This family feeding whopper comes in at two pounds. The burger would give @jlsplatts a run for his money.

The gentleman in the top right-hand corner of this picture was playing some pool with his buddies.
He was kind enough to have his buddies move their stuff to another smaller table, as he saw us invade the place.
That kind of says it all about the folk around here.
The woman taking our order is Hank's daughter Shelly, what a sweetheart.

With the gentlemen who were playing pool going to the bar, my grandson sprang into action. Games of any sort always accompany family time, and why should this time be any different.

With his uncle showing him how to set up the rack of balls, and explaining some rules, let the games begin.

The last thing on my grandson's mind was food, as he was being given some instruction on the importance of chalking up your stick.

While we waited for the food to arrive, a couple of cold ones and a shot or two seemed in order.

When the food arrived it was a feeding frenzy. The burgers, fries, wings, onion rings, and trays of appetizers didn't stand a chance.

This guy ate while playing pool, the competition was getting rough.

Before you knew it, there were quarters lined up on the table. The pool sharks were coming out of the woodwork. #farm-mom was there to make sure everyone followed the rules.

Teams were formed along family lines.

At the end of the evening, new friends were made, giggles were had, and bellies were full.
There's nothing like having a good meal with family and then being able to just stand up and walk away, NO DISHES!

Yo, check out the guy in the corner, looks like he enjoyed himself. Is that a photobomb or whatever you call it when someone checks into the pic? 😁

The Outpost has now provided three generations of our family with food, drink, and good times.

A special thanks to the three amigos who run the best show in town, @idig, @jlsplatts, and @dandays.
A big shout out to @appreciator, you're the man, or possible the gal, who continues to so generously support #fff and all of us chefs.
thankyou very much.

Man that story brings back memories of my own.

I can imagine the nostalgia or returning to that place after so many years and humble beginnings. I get so enthused when I realize I am creating memories for my kids and I want some of them to look like this.

Thanks for the very gracious words @zekepickleman.

Being the Dad that you seem to be, fond memories are for sure in your future.
I hope your family is well and may the new year bring all of you nothing but happy times.
Thanks for stopping by, it's always a pleasure to hear from you.

Damn that's so awesome to be able to have 2 generations enjoy and fall in love with something your own little tradition and what a tradition it is, I would love to be carried out of there in a food coma

@chekohler, it's nice to make your acquaintance. Thank you for checking out this post and a double thanks for such a nice reply.
Enjoy your weekend.

44? My man, that’s how long I’ve been alive. The Outpost sounds like a four-course joint—get it?

Has anyone told you lately you’re a good lookin dude? I’m not saying that or anything, I’m just pointing out the fact I’m comfortable enough with my manhood to pose the question. 😉

You have a beautiful family, my friend, that photobomb was classic. I really enjoy reading your articles, sir, your contenders are no exception. Each time I read your work, I want to come pay a visit in person just a little bit more—here’s to hoping we reach that day.

Great entry, @thebigsweed, thanks for always entertaining us with your family oriented articles, they’re refreshing to read every.single.time.

Give our love to @farm-mom, you’re a lucky dude, @ryan313, we’ll catch up with ya’all (ya’all seemed fitting after all of the farm/outhouse talk) soon.

Ya'll is welcome at any time.

From one good looking guy to another, I'd ask you out if I were younger, or if you were older, or if I was gay, which is not a bad thing, I just want to make sure that's understood.😁
Thanks for the kind words, they're never ever taken for granted @dandays.

Way to one-up my good lookin guy comment! Lol. Dude that was funny! I can always count on @thebigsweed for a good comeback. Whenever you respond to me I tend to respond back regardless how many times we’ve gone back n forth responding and these things end up lasting for days. I should’ve probably said something about ‘back n forth’ about 15 more times in that last sentence. I’ll use the line I Told Pura the night we met. “How old do you think I am?” See there? I set myself up because I didn’t know how young she was, i just knew she was quite a bit younger than me and i didn’t want to freak her out. So, when she guessed my age six years younger than I actually am, by saying “close enough” wasn’t lying at all. Then I found out she was 8 years younger than me and, well, eventually I had some explaining to do. But that was mooonnths down the road, by then I had plenty of time to let my quick mouth give me an honest shot!

Hm.. 🤔 All of this sexy mirror talk and whatever else I’m saying from a @foodfightfriday contender, huh? Just when you least expect it. #fff throws a curve ball.

It's funny how we look at the age of a person. As we get older the gap tends to close. Now if you were 26 and Pura was 18 when you met, that may have raised some eyebrows but the difference in age between 40 and 32 is no big deal.
Your quick mouth may have opened the door, but your personality is what kept you in the game long enough for her to realize she had found the man she was looking for.
Boy did we both get lucky @dandays.

your personality is what kept you in the game..

That’s one of the nicest things you’ve ever said to me, Sweed.

I know that I would not be the person I'm today if I hadn't run into @farm-mom, and I think you may feel the same way about Pura!

I have a feeling you can read what I’m about to say, having said something along the same lines yourself and see zero (0) cheese in it.

“You make me want to be a better person.”

@thebigsweed, I’ve done things I shouldn’t have done, said things I shouldn’t have said, and I’ve been confined to four walls more times than I care to admit. I used to make the mailman, tax man, thinking of passing loved ones, to name a few, vanish at the bottom of a bottle—and that one’s “uncontrolled.” I don’t know if I have enough gigabytes, chain space, whatever it’s called to admit the steps that got me to where I am.

“You make me want to be a better person.” How does your phrase read?

Looks like your family found one of those hidden treasures!

Thanks to @freedomring, this post has been resteemed and featured in today's edition of The Daily Sneak.

Thank you for your efforts to create quality content!

Thank you @thedailysneak for including this post and a special thanks to @freedomring for taking the time to curate this post.

This sounds and looks like a place where I would enjoy dining @thebigsweed. Good stuff.