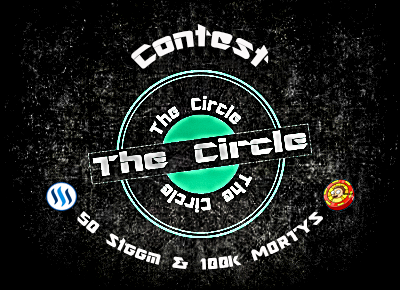 As we said yesterday The Circle today launches its first contest that will last for five days .

Since we want everyone to have the opportunity to earn some tokens, the contest is very simple.

Just leave a comment with the answer, in this article, to the next question:

They will win the five most complete answers that are closest to reality.

Each winner will receive 10 STEEM and 20K MORTY$, apart from a vote of The Circle in their comment.

In order to receive the prize in MORTY$ you will have to have your own EOS account. If you do not have it and you are one of the winners, you can only receive the STEEM prize, canceling your share of MORTY$.

If there are not enough participants, the contest prize will be used to swell our accumulative jackpot and our donation fund.

Remember that to access all the updated information of our project we recommend you visit both our website and our Discord server..

This post is supported by @tipU upvote funded by @dresden :)
profit sharing tokens | For investors.

hello, sorry for my english, the project is to attract investors on steemit and reward the tokens holders with upvotes in proportion to the stored tokens

Greetings friends of @the.circle, the project offers a variety of advantages for Sphere forks, among them we have marketing tools and ease of earning money, plus a guaranteed security in terms of data management of users who own these tokens.

Greetings to the whole team "The Circle", wishing you the best of luck in the process of distribution of "Sphere Token" chips.

#
After consulting the technical information and having read in detail the content of the official web site, I can issue the following answer to the initial question.

During pre-sale "Sphere Token" will have a value of: 1 SPHERE = 1 STEEM, or the equivalent in other currencies.
Recall that the presale will last one week from this date and investors may have a 40% discount during this period.

cryptocurrencies (EOS, ETH, TRX, LTC, BTC, BYTES), tokens of the same Steem Engine ecosystem (ENG, PAL, CCC and NEOXAG) and in tokens of some EOS dapps (BOID and KARMA) will be accepted as payment

After presale, 640k tokens will be issued to many people and projects, where they can recover the investment by multiplying the amount invested by 40 including the amount of the airdrop.

The project focuses mainly on STEEM blockchain, with plans for future expansion to other platforms as the project evolves.
All investors holding Sphere token will be entitled to a daily vote for life by the "The Circle" team, with a percentage of vote in favor of the amount of chips they own.
40% of the profits generated from the sale of Tokens and taxes by delegations will be accumulated in a boat distributed annually among all the holders, according to their proportion of real ownership.
e will be distributed annually to all token holders, in proportion to their actual ownership.
10% of the proceeds from sales and delegations will be accumulated in a fund for donations distributed annually among NGOs at the choice of our investors; Among the list of Charities And NGOs that have been so far, the following stand out:

The second 50% of profits will go to the "The Circle" project account, to be placed in the stake through "power up" and increase voting power to favor investors with reasonable votes.
The top 10 investors will be considered "distinguished members", who may participate in the orientation of the project, make proposals and, probably, receive different types of gifts in the future.

"Additionally, a monthly raffle of 1% of the initial supply will be made, to favor our chip holders with a minimum of 2,500 SPHERE, being the raffle jackpot each month, that amount divided by 12 (8,322 Sphere / draw / month)."

Thank you for your attention, I hope I contributed with my response!

This blockchain clearly focuses on its investors, favoring them greatly; carrying out a totally attractive and dynamic business approach, promoting marketing campaigns attracting the attention of new potential investors. This implies an unprecedented expansion in the part of our tokens and cryptocurrencies such as: EOS, ETH, TRX, LTC, BTC., BYTES ..), tokens of the same Steem Engine ecosystem (ENG, PAL, CCC and NEOXAG) and in tokens of some EOS dapps (BOID and KARMA).

One of the services provided by this platform for its large investors is that they have the right to a daily vote for life, they also receive a percentage of their vote in favor, this will depend on the amount of chips they have, and the vote in favor will be greater the greater the quantity. This percentage of positive voting will be directly associated with the total number of tokens issued that year.

When you invest in our token it is a way to change your STEEM, providing you with a series of advantages, both for the investor and for the community. People and many projects that will enjoy an aerial launch of our token and discounts will be made for their pre-sale purchase for a week.

Free monthly draws are held and offers a cumulative Jackpot system, which gives 40% of the profits generated with the purchase of tokens and the taxes of the delegations. To be eligible to obtain this distribution of funds, the investor must be in possession of at least 8,000 Spheres before the end of the year.

The Circle project will focus on attracting investors to the STEEM blockchain, offering its users advantages that will allow them to maximize their investment. For our Steemit community, this is an excellent way to invest in STEEM, since it offers a fair and safe ecosystem for all its participants and through the purchase of its tokens, even you can start enjoying the many benefits they offer.

The tokens of the project can be purchased both in cryptocurrencies and through STEEM delegations, and they give you the opportunity to:

My answer is: It costs you money for a below dust threshold vote while @dresden who runs this scammy scheme gets to earn lots of cash from curation rewards!!

Hello, Mr. Hater.
You're wrong, as always you've been since the beginning.
We said we'll upvote the winners, and in this case, we'll create the rule of downvote the loosers wich envy and hatred doesn't let them think with clarity.
Greetings.

I really hope you're attending Steemfest :-)