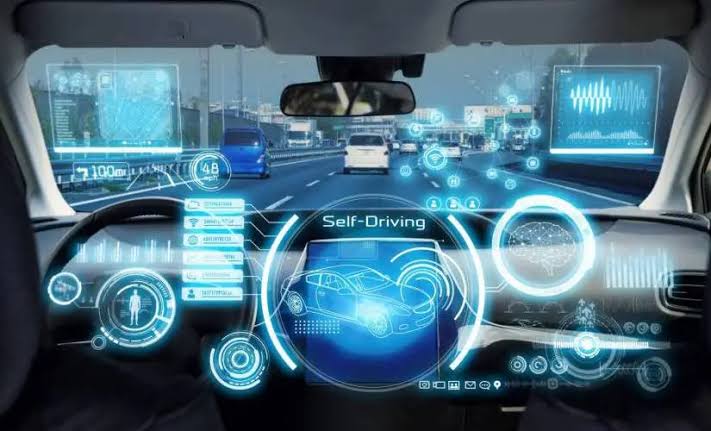 Self driving vehicle's are the ones in which human dont need to control the car inorder to safely operate it.They are also called as Autonomous cars .Here basically they combine sensors and software to navigate as well as control the vehicle.

Source
How exactly dot they work?
Many self-driving technologies have been developed by companies such as google ,uber ,tesla etc. and even researchers have tried developting it too!

Though all the design's may vary a lot the logic on which they work on usually remains the same. Most autonomous car systems create and maintain an internal map of thier surroundings . Software then processes those inputs , plots a path and sends instructions to the Vehicle (Actuators) which is basically like the cpu of the car and control the brake, gear, acceleration etc . All the codes Are hsrd coded such as obstacles avoidance, predictive modeling ,and "smart" object discrimination which means how it differences various objects. These softwares help the car drive safely following the rules.

Ubers self driving prototype uses 64 lazerbeams along with many other sensors whereas Google's prototype uses high power sonar as well as camera's. Various companies use different sensors and devices but in the end the objective and logic is the same.

Source
Partially autonomous need a steering wheel and a human driver in case of uncertainty. Till date there have been many prototype of fully automated car but these are not for pusblic use and just prototypes as of yet . One prototype that stands out is Mercedes Benz Vision AVTR. Autonomous cars can be further distinguished whether they can communicate with other vehicles , next generation traffic 🚦 lights etc.

In the end the benefits of a self driving car are not 100% solid as of yet. More info is needed to see how they will fully impact the drivers , the public as well as the economy.

Thanks for reading upto here! Let me know your thoughts on self driving cars in the comments^^.

Interesting article. This will be a great innovation.

thankyou for your response^^, Yess cant wait to try one of the these cars!!!!

Well technology will keep evolving and so in the next couple of years I am certain that they will figure it all out.

Heyy @valchiz thankyou for your response! Yes hopefully they figure it out really soon ^^.....can't wait to see these cars in action .