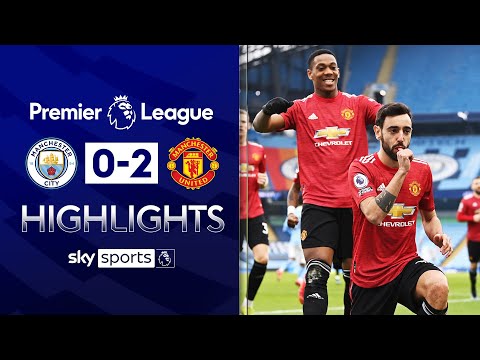 In the 3rd match of the afternoon, we saw the top 2 teams in Manchester line up against each other in a top of the table clash. In the eyes of many, Manchester City have already won the title and with question marks over Manchester United's recent performances (as @irman pointed out earlier in the week), the big question was whether United could do enough to reignite their fight for a Champions League spot. This was a match that City didn't need to win, and that United couldn't really afford to lose. With this in mind, I expected a typical Solskjaer set-up focussing on defending well and then hoping to hit City on the counter. The inclusion of the pacey Daniel James, Marcus Rashford and Martial replacing Cavani mirrored my expectations.

There were no real surprises in the City line-up which is probably a surprise in itself. Pep must have known how Solskjaer would approach this game so I fully expected to see a more cautious approach from City with neither team risking enough to win the match, chances at a premium and both teams happy with a 0-0 draw.

How wrong I was.

United took the initiative straight away and in the 1st minute, Martial burst across the edge of the penalty area closely followed by Gabriel Jesus who clumsily bundled Martial to the floor giving United a clear penalty. It went to VAR but there was little doubt that the penalty would be awarded. United's man of the season, Fernandes (obviously), stepped up to take it and despite Ederson getting a strong hand to the ball, failed to keep it out low to his right. Jesus cursing himself for gifting United an early lead. ⚽ 1-0 ⚽ to Manchester United after just 2 minutes.

Soon after the goal, Luke Shaw got into a good position and tested Ederson again from inside the area. Unfortunately for Shaw, his weaker right foot couldn't generate the power or placement required to beat Ederson. United had made a lightning start to the match and even Gary Neville was happy.

City weren't prepared for United's early high pressing and tried to slow the pace down to get a real foothold in the game after a lively opening 10 minutes. After this, the game settled into the pattern that you'd have anticipated before the match. City dominating posession, probing at the United defence and United happy to let them and looking to counter-attack.

City's probing saw Gundogan be the first to test Dean Henderson's goal with a shot from the edge of the box and Zinchenko also hit one from outside the area but both efforts were straight at Henderson and gave the goalkeeper some catching practise. Despite their endeavour, probing and attacking tempo, City struggled to create any clear cut chances. There was no real threat to Henderson's goal with too many shots from outside the box going straight at the Manchester United goalkeeper. The closest City came in the 1st half was in stoppage time when Mahrez found a bit of space to the right of the box and blasted a shot across the face of goal. An offside Gabriel Jesus stretched to tap it in but was unable to reach it.

The 2nd half started in the same pattern that the 1st half had settled in to and you could see the danger growing for United, Rodri putting a Jesus lay off narrowly over, clipping the bar on its way. Shortly after Rodri's miss though, Manchester United beat City's high press far too easily. Henderson took his time picking the right distribution, throwing the ball out to Luke Shaw. Shaw ran the length of the pitch, played a one-two with Rashford before striking the ball through 3 defenders and into the bottom corner, giving Ederson no chance. ⚽ 2-0 ⚽ to Manchester United with Solskjaer's game plan working to perfection. (And much to my annoyance having transferred Luke Shaw out of my Fantasy Football Team.)

City again continued to probe, and United continued to counter-attack with Martial missing a glorious opportunity at the far post, completely miscueing his header. For all of City's probing and possession, it was United creating the better chances.

As the half progressed, City became increasingly desperate, sloppy in possession and it was Manchester United who started to totally dominate. Martial missed another golden opportunity to finish the game off, finding himself one-on-one with Ederson and placing the ball far too close to the City keeper.

With 20 minutes to go though, Phil Foden was introduced (a young player with so much ability and in my opinion, doesn't play enough) and he changed the course of the game. From the point of his introduction, it was one-way traffic towards United's goal. With Foden's youthful energy, City upped the tempo and started pressing high and winning the ball back quickly. When this happens, it usually spells trouble for their opposition and with 10 minutes remaining, Raheem Sterling somehow managed to miss a De Bruyne cross from inside the 6-yard box - any contact and he would have scored but he missed the ball completely. City were back to their scintillating best and it was a question as to whether United could keep them out - with the ball gravitating towards Manchester United's goal. The chances kept coming for Manchester City but they couldn't convert any of them - a De Bruyne corner flicked on by Gundogan and narrowly missed by Stones at the far post summed up City in front of goal. Close but not quite there.

It's hard to argue the Manchester United didn't deserve their win. For 70 minutes, they looked in complete control and only really looked threatened following the introduction of Phil Foden.

Having watched Manchester United away at Crystal Palace in midweek, I find it hard to believe that a team can play so differently in the space of less than a week. They have ended Manchester City's 28 game unbeaten run in all competitions, 15 Premier League wins in a row, and from a City point of view, they'd have preferred to lose this run to any other team in the world.

Manchester United fans around the world will be going to bed tonight (or waking up tomorrow morning) very happy and full of optimism again. With the gap at 11 points with 10 games to go, they can't, can they?

I'm glad you could do this.
I'm a Manchester United fan, and we are taking the trophy!! Hahahah