Congrats to "mynameisrxge" for being FIRST to get his free $0.10 worth of 1 telos token after downloading the Mobile telos Wallet or SQRLwallet.io which gives you a Free Telos Account 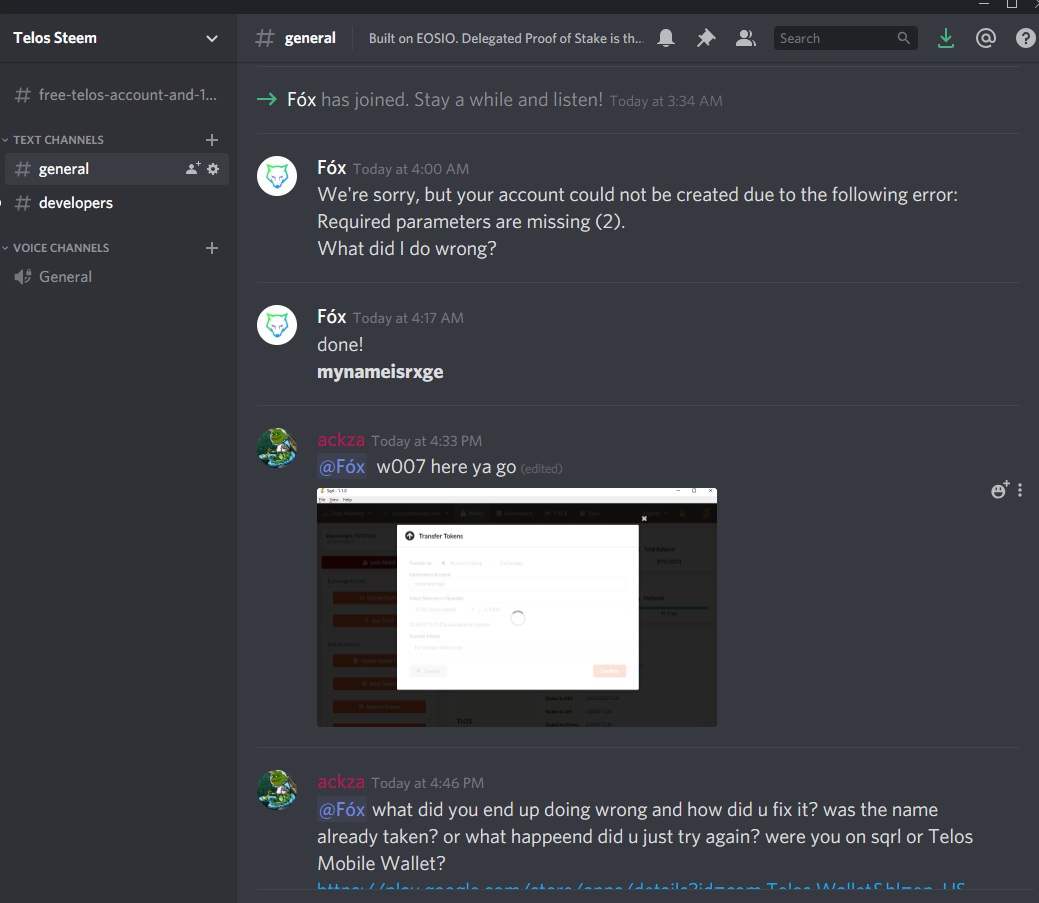 Congrats to steem and now telos user mynameisrxge or Fóx#5062 on discord for being first to come to the TeloSteem discord https://discord.gg/juQaF5C
I am giving out 1 telos worth $0.10 to every steemian who signs up to get a free telos main net account! BY THE WAY Telos SISTER chain iis not the best wod to describe telos, we will just call telos the MAIN NET telos, vs EOS MAIN NET. It is not a side chain or fork to eoos.... TLOS is a independent EOSIO main net, with its own separate special governance systems unique to telos. Anyway, come to the discord and get 1 free telos like FOX here!

Of course everyone on https://SteemSanDiego.com will all get 1 telos when they signup for a Free telos Wallet!

And for more information check out https://t.me/hellotelos for the Telos Telegram

OH by the way thanks for the clarification by Telos user @jim_hewitt_telosfoundation from https://telosuk.io/ and telegram https://t.me/hellotelos who educated me on how the Telos community doesn't want to keep using this term "sister chain" to EOS as its not the best descriptive phrase the telos community wants to promote.

When you have an EOS wallet, you cannot simply hold telos, or WAX or Worbli (Maybe with a PEGGED Asset like steem-engine has pegs but if you want MAIN NEt Telos WAX or Worbli you need your own independent wallet for that blockchain.

he "network" of telos or its blockchain, is the governance system. The governance of a chain can control many things, including its distribution. In the case of Telos, the governance was so efficient they were able to vote to introduce a new update and really the start of a new economic Model for blockchains in my opinion, and this is the TEDP Telos Economic Development. This package of goodness and wisdom from @dapperd and other Telos Founders and white paper authors, allowed for 0% inflation and up to 30% APR on T-REX telos Resource Exchange passive income. So they will pay for Block producer pay, Worker proposal funding and other necessities using the Unclaimed Telos funds (Remember 1 billion telos, but less than that claimed, so hundreds of millions of telos available for things like millions of free accounts, worker proposals and more. By mid Dec if you haven't touched your telos that was dropped to EOS genesis account holders, it will go to this fund.

Please read more about the Telos White Paper and its TEDP here
https://resources.telosfoundation.io/telos_white_paper_7_17.pdf

if you need technical questions answered about Telos I highly recommend checking out telos UK! And if you are a UK steemian like @bleepcoin and others I recommend linking up with Telos UK! DPOS Uk users can combine forces here. Anyone needing their irst 1 T

LOS I goot you covered boys. Just come to teh discord and post your telos username! https://telos.myfreecrypto.org

If you have any questions about telos, and its development for YOUR project, come talk to the telos telegram! https://t.me/hellotelos

The TELOS symbol is TLOS, not TELOS so lets only use Telos and when capitalized its TLOS because THAT is the ticker symbol, thanks!