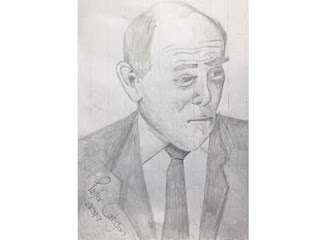 I choose this man because he is world-famous for his prize which he received in Physiology or Medicine.  He shares the price with H. Robert Horvitz and Sir John E Sulston.

He was a biologist and also called Uncle Syd.  He made a significant contribution to work on the genetic code, and other areas of molecular biology while working in the Medical Research Council(MRC) Laboratory of Molecular Biology in Cambridge, England.

His parents were Jewish immigration, his father came from Lithuania in 1910 and his mother from Riga, Latvia in 1922.

He was educated at Germiston High School and the University of the Witwatersrand.  He joined the University at the age of 15.  In his second year, it was noted that he was too young to qualify for the practice of medicine at the conclusion of his six-year medical course.  He then completes his Bachelor of Science degree in Anatomy and Physiology.  He stayed on for two more years doing an Honours degree and then his MSc degree, supporting himself by working part-time as a laboratory technician.  His master's thesis was in the field of cytogenetics.  IIn 1951 he received the Bachelor of Medicine, Bachelor of Surgery (MBBCh) degree.

Dr. Brenner received an 1851 Exhibition Scholarship from the Royal Commission for the Exhibition of 1985 which enabled him to complete a Doctor of Philosophy (DPhil) degree at the University of Oxford as a postgraduate student at Exeter College, Oxford.

Dr Brenner made several seminal contributions to the emerging field of molecular biology in the 1960s.  The first was to prove that all overlapping geneti8ic coding sequences were impossible.  This insight separated the coding function from structural constraints as proposed in a clever code by George Gamow.  This led Francis Crick to propose the concept of the adaptor or as it is now known “transfer RNA (tRNA)”. The physical separation between the anticodon and the amino acid on at tRNA is the basis of the unidirectional flow of information in coded biological systems.  This is commonly known as the central dogma of molecular biology i.e. that information flows from nucleic acid to protein and never from protein to nucleic acid.  Following this adaptor insight, Brenner proposed the concept of a messenger RNA, based on correctly interpreting the work of Elliot “Ken” Volkin and Larry Astrachan.

Brenner, with George Pieczenik, created the first computer matrix analysis of nucleic acids using TRAC, which Brenner continued to use.

Brenner was married to May Brenner (née Covitz, subsequently Balkind) from December 1952 until her death in January 2010; their children include Belinda, Carla, Stefan, and his stepson Jonathan Balkind from his wife's first marriage to Marcus Balkind.

Now my own opinion of my work.

So what do I think about the sketch which I did of Dr. Brenner.

I struggle with his nose and mouth.  This picture I think was taken when he received the Novel Prize.

I only work with an HB pencil to draw the sketch.

Music I listened to:

Now I done, it was last night a nice cool windy night with a little bit of rain.