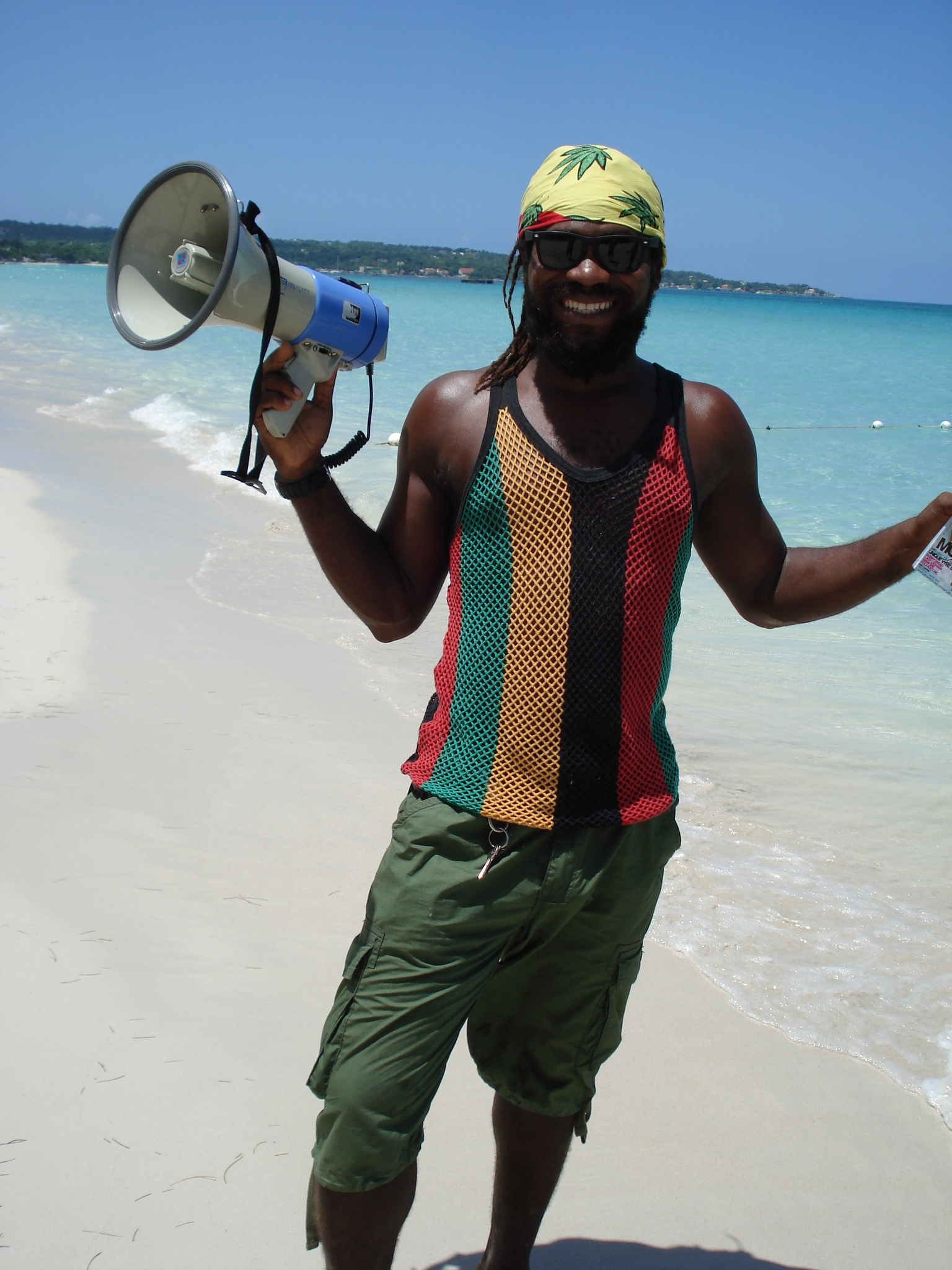 I have seen this character just about each and every time I have visited Negril, dating back sometime to the 1980s. The Bourban Man is a well renowned character on the 7-mile strip, and everyone knows him best for pacing up and back down the white sandy beach calling out,

“Tonight, tonight, at the Bourban Beach Café, live reggae music by up and coming artists you surely will not want to miss! Come check it out tonight from 9pm until the sun comes up!”

You get the gist. He doesn’t always say the exact same phrase. There is variation involved, but you get the point I am trying to make. The Bourban Man is essentially the Bourban Beach Cafés “hype man” of sorts. His very distinct and deep voice can very easily be distinguished from hundreds of yards down the beach, even without the megaphone in hand.

The Bourban Man, megaphone in hand, and all

The Bourbon Man and his beautiful wing-woman

Venturing up the beach to promote the BBC

The megaphone acts as an emphasizer to get his message across to as many people as possible, and from my no-tourist experiences here, I can tell you that it works quite well. The Bourban Beach is normally packed with people from diverse backgrounds – Jamaicans, both Rastas and Vampayas; tourist folk; no tourist folk such as myself; among several other types of people. The island as a whole cherishes and boasts flavorful cultural diversity, one of the many reasons as to why I always find myself coming back to Negril, Jamaica.

Back in the day, the Bourban Beach used to be called "Da Bus." This was back in '87, and somewhere along the lines, the name was changed to "Bourban Beach." When I visited Negril back in the late 80s, I can distinctly remember the strong smelling pimento wood and spices used to cook the jerk chicken filling the air, which at the time, was located street-side.
Now, whenever you go to "Bourban Beach," the seating area is located beach-side.

I recall the jerk being much better back in the late 80s when the chicken was smoked 24/7 in old metal drums used for cooking and smoking the meat right on the street. I can very distinctly remember the street bustling as people lined up to get Da Bus's world famous jerk chicken. Now the best jerk in Negril, at least in my personal opinion, is at a place called "Three Dives," pronounced "Tree Dives" by the locals.

One thing that hasn't changed, however, is the option to order an ice-cold traditional red stripe with your jerk chicken and fries.

The now, Bourban Beach, is a place where live music is played, performers have the chance to showcase their talented skillsets, and spectators can enjoy all of which is taking place while sipping on an ice-cold red stripe. One of the many great performers I have seen at the BBC was a character that has been around the block a time or two. I don’t know how old exactly, but I can tell you he is probably older than what your guess would be (meaning he looks pretty dang good for his age).

The fire-eater in action on stage!

He dances and jives to the music on stage while playing with the fire burning torches. He contorts his body and moves around effortlessly just as he was born to do. The main event of his performance is when he takes the torches and engulfs the flames with his mouth and extinguishes the fire. Here is a picture of my son and the fire-eater himself back in August of 2007. Does anyone from down in Negril know if this man is still alive? I would seriously love to know if you do.

The Bourban “hype” Man is an important figure here in Negril, but even more specifically, for the Bourban Café. He plays an important role, bringing people to together to chill out, vibe, and enjoy the live reggae music and performances by entertainers here at the BBC. Kind of similar to what we have going on here with the #reggaesteem community. The founders of the #reggaesteem community, in this particular metaphorical sense and for stories sake, are like the “hype” men. They have brought people together who have a common interest in spreading the #onelove vibrations to share amongst the community as a whole, and this includes whatever sort of content that may be of value to the community altogether.

If you ever venture to Negril, look for the Bourban Man, and tell him personally that you have heard of him before from @super-irie. Currently, he is a very famous and familiar face here in Negril, but this can change by spreading the #onelove vibrations throughout the #reggaesteem community, which has closely adjoined members from across the globe.

Hey @donald.porter, I am sure very well that you personally know "The Bourban Man." What can you tell us about the Bourban Man that I have failed to present in my article since this feature is not one that I know on a personal level like my previous four posts in the Faces of Jamaica, a ten-part series?

If you missed the previous four Faces of Jamaica and wish to view the previous posts in this series, you may visit them at the referenced links below:

Since the support from the #reggaesteem community has been great thus far regarding the Faces of Jamaica series, I have decided that I will be telling the stories of two bonus feature individuals.

Stay tuned in and engaged to see these two special bonus features at the end of this 10 part series of posts, which shall conclude sometime by early or middle of next week

Great stories ,faces and places so far. Not sure if you did already but incase you haven’t do tell us how you got the name @super_irie and the story behind it. Keep up the good work.

Thank you much my friend, this I appreciate. I am enjoying recounting such memories with friends I have met over the years. It is really making me want to venture back.

Ahh well so, as the story of @super-irie goes, firstly, my last name is super and irie has been in the blood ever since I visited Jamaica back in the late 80’s.

Great article AGAIN @super-irie. This post deserves significantly more than $0.13. I hope the community responds to your valuable efforts here

Thank you for the kind words.
Respect

Hey @super-irie, here is a bit BEER for you. Enjoy it!

I found this post thanks to @miti-blog work, and his Curation Project: Undervalued Deserving Contents. Your work deserves way better, I'm happy to give you my upvote. Cheers, Nicola @knfitaly

@super-irie, Looks like an Entertaining Character and in a way he is using effective way of Promotion.

Enjoy your time ahead and stay blessed.

Bless up. thank you. I am sure the bourban man would love your words as I do.

Keep up the good work. Manually curated by @bdvoter team.

😀 has no idea... Fire Man or Hype man we call him ... sells the most tickets up the beach if your ever keeping an event here he’s the one to link

Bless, will be sure to show him this he also frequents @miyard

Hey @super-irie, here is a bit BEER for you. Enjoy it!

Hell yeah! Some fire right there! Blaze the herb and heal the nation's!