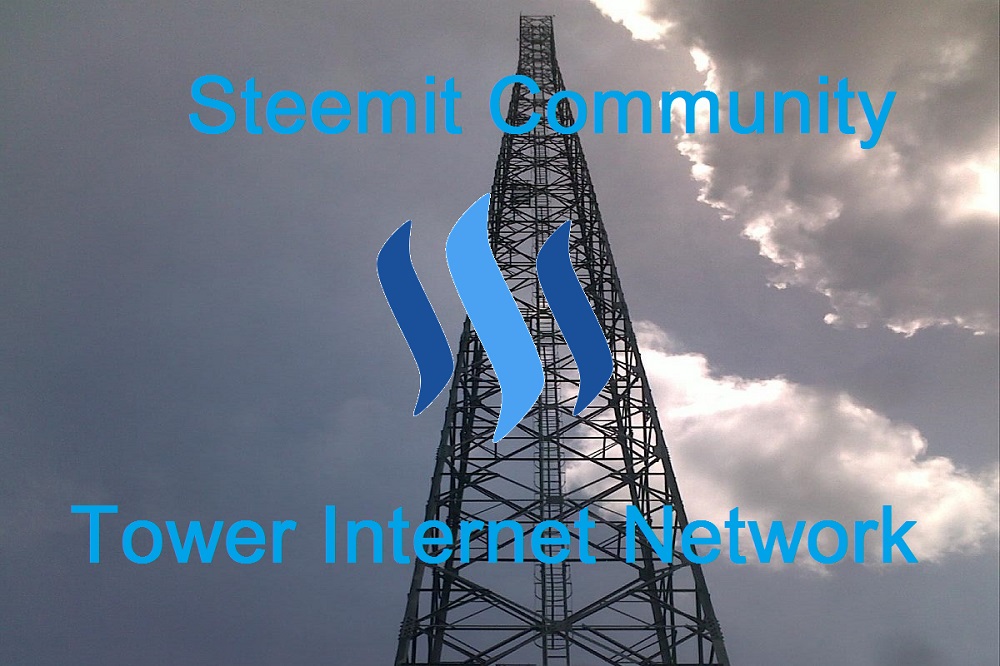 Previously I apologize, sorry I have to say, cancel the planning process of making the Steemit community internet network tower, which I funded at my own expense, for the needs of the community, in community, which, this tower, I consider very necessary and owned by the community, when accessing social media websites, then I say here, but if there are Steemians aceh, who want to continue in the implementation of this process, I will always be ready to help, steemit chat.

This cancellation, I did, because there was no solution to me who was here, from the party that gave me a "downvote". both in a word, suggestion or comment, to me, I am an ordinary person, living in a village, has rights, joined in any community, while showing all my hard work, in the art of drawing original pencils, at Steemit.com.

If you want to see the process that I do, you can all see it below, which I explain clearly, from beginning to end :

Only one month left, towards 2020, I as a Steemians active in the Steemit community for 30 months, after making a house, with the results of SBD and Steem, which I got, while playing in the Steemit.com community, without doing "turning off the power" This year I have thought of an idea that is very useful, and can be felt directly by the entire community and around where I live. especially steemit players, can access the steemit.com community website with a free internet network. who can bring their hearts and souls to join the steemit community or other online communities, which is healthy for the long-term future of the community, namely Building the Steemit Tower Internet Network.

Like the picture you see above, the proof that the Aceh Government has never banned the community from enjoying the "Free Wifi" service you can see, through the construction exhibition held in the city of Lhokseumawe, a few weeks ago, it was time for the Steemit Community to have the Iaringan Tower The internet, which can be felt directly by the community, not only feels the results of selling Steem and SBD, even though prices are cheap now and hopefully Steem and SBD, will be on the moon again.

By not waiting any longer, in the last few months, I have checked the position of the tower "The Location of Owned Land @ Sultan-aceh" to establish the Tower, I continue to check the existing tower, in the area I live, either from a paid internet service provider or free internet network, which is provided for the community, which can be connected to several villages, because it does not have a tower tower, internet network, almost all villages, except using a cellular telephone network, "buy internet quota" experiences many obstacles that are felt directly by the community, and Steemit players in particular.

The implementation of this type of tower, I will adjust according to the place and condition of the reception of Internet network signals, which will be received through this Internet Steemit Tower Network, likewise, the issue of cost, I will use Steem, which I get from posting and steem savings from turning off long power . I hope this plan is finished quickly, and start collecting Steem Power again, into my account, so that it becomes bigger, even though I have to be a SPUD contestant, to get Steem Power assistance of course, in order to be able to help all Steemians in the Steemit Community or other Communities, connected to the blokchain network.

overall this tower type above, is one of the options, in the cost that I can collect, because the tower type above, can be one of the central tower Tower community in villages and cities, specifically for receiving and retransmitting, internet network towards the village and surrounding communities the mountains. with antenna height above 15 meters, from the ground.

So that my goals can be achieved for 2020, which is waiting for just one more month, now I have started by using the cost I have "savings" and selling Steem, which I have been saving to "turn off the power". I've never done before. despite building a house in Aceh.

I took this idea because, besides having a house that is known to many people in Aceh, because of the presence of the Steemit community, there have been many benefits that have been felt by the general public and Aceh in particular, without exception, so I took the initiative to build an Internet Steemit Tower, This facility. certainly very useful, because it can be felt directly by small and medium-sized communities in a family, with the existence of the Steemit Tower of the village Internet Network. Other benefits for example:

Benefits for Players in the Steemit.com community

After making a house, this is what I hope is present in the middle of the community, that is
Internet Steemit Tower Network Planning, means that the public has known, if so far, large companies, which have Tower Towers, such as:

In 2020, the Steemit Community already has its own Menara Tower, although there are other functions for the future, it can still make the next Steemit Tower, for other regions in Aceh - Indonesia and other countries.

The Hotspot Internet Network Steemit Tower, must have a minimum height of 25-30 meters, based on the results of a Tupologi survey I conducted, so that the place of origin of the network and receiver of the internet network, effectively receive internet signal emission, sourced from the Tower in the city.

In the first stage, I have bought some software, from the sale of my Steem that I saved, as for the other equipment that I bought, because the costs and materials are too expensive, so I bought a device that has been used "used", for me to use in the stage trials, before the Steemit Internet Network Tower, I woke up starting from the basics, such as:

The ingredients The devices that I currently have are

In the trial, receiving a free WiFi internet network signal to the public, I used the equipment that I bought, in the new condition, except the modem, see below:

In carrying out the Trial of the acceptance of the Internet Network from the City, which I will send to the entire Community in the village, to minimize the cost of leasing local technicians, during the trial period, the equipment that I bought, in this trial, I was assisted by my two children.

The picture above is the process of installing an internet network antenna on a pole, while tying a bolt.

The picture above, measuring the accuracy of the Antenna by using Compass and Water fitting, so that the position is straight, and according to the position we will receive the wifi signal. buffer that I use is a wire, to maintain the stability of the antenna pole, so that it is straight and does not shake.

The antenna preparation has finished, and it is in position, which I have adjusted, with a high signal search distance. between :

after all is done, in the installation of the internet network signal receiver antenna, I adjust it in the form of antenna height, as below,

The first thing I have to do is to go into the antenna settings that I will use. CP300 Toto Link Type, if you want to learn, can follow the steps as I did below, but I have to set it first, the IP on the laptop, see below this:

After the picture above, click "Ethernet 2x" appears as shown below

Select TCP / IPv4, then it appears as shown below.

After setting the laptop's IP has finished, I will go into the antenna settings, to do IP settings, if needed, if not, I immediately make a search, Internet Network Frequency.

The trial that I did was only limited to the trial height of the antenna and the device, which you can see below:

From the test, you can see that the WiFi Internet network. without having to use a key, enter the network, it can be accepted by the antenna that I bought, by adding a few additional settings.

To test the signal that I got, even with the reception of "Bad signal", I still tested this result, by connecting "Antenna" and "Modem TP-LINK", As in the order below.

Cable on the adapter is ready

It turned out that I was having problems, when opening my blog posting page, after a few times, repeating and checking, the cable or modem I installed, is there any possibility of loose, apparently I still can't, open my blog posting on steemit.com, because of the antenna height which is insufficient, whereas Antennas have worked well, in receiving Internet Network Signals.

My friends all, wherever you are.

surely you have seen, and read the whole that I conveyed here, before I apologize, all the effort I have done, but I still have not succeeded, to open a web page.

as I said above, the signal reception is not good, even though the height has reached 15 meters.
still unsuccessful, to open the website page "steemit.com", but I am very happy, the internet network signal, which is seen to be received by this antenna, that is as preliminary evidence, that, the people of Aceh, will be able to receive free internet network signals, through Steemit tower this internet network. all that remains is time and implementation, which can answer all of this, in an effort to build a tower for the community. immediately realized.

From the basis of the results of the above sources, I intend to make Steemit Internet Network Tower, for the benefit of the community and any community. In order to be felt directly by the people in the village. for free, without having to pay.

The process I have done above, it has been seen, that the height of the antenna, must have above 15 meters, so that all these dreams, immediately carried out, to live the future of the steemit community that is still long, like my hopes, the hopes of community members and the wishes of the people themselves . in freedom of using the internet network.

Thus the arrangement and planning that I made to build the Steemit Internet Network Tower, hopefully this can be quickly achieved, if there are errors and language and procedures for writing this article, I'm sorry.

Greetings from me to Steemians and the Community
I say thank you, hopefully it will be useful for the whole community.

All questions, suggestions and comments, I will be happy to answer them.

I hope you complete your plans with the make Steemit community internet network towers. It is very important and I am sure that the steemit community appreciates what you can do here.

You have to be patient and not give up steemit now, we appreciate you.

Greetings from everyone in team @xpilar

Hi, I removed my previous downvotes to support this project.

I'm sorry for being late to reply to your message
thank you once again, I am very grateful to you and @likwid
for your support, as you can see, in this post.

thank you so much
and i represent my friend @xpilar

thank you so much @davidad

thank you so much @nevlu123

Hi @sultan-aceh, that is good to see what you have had in your mind and as you can see @transisto also return the rewards.

Somehow reading your post I can't understand if you are going to keep going with your project or if you cancelled it?

Also I noticed that you have unfollowed everyone including all your friends and supporters especially like @xpilar as well as you have also removed all the witnesses too?...

thank you so much @stef1

thank you so much @steemitboard