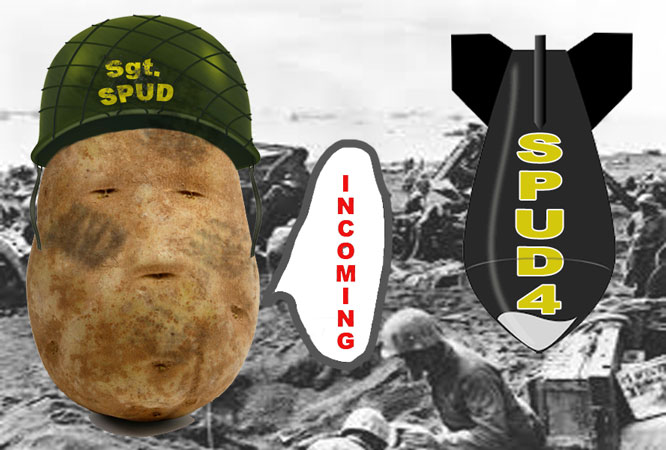 Lately, the Steem ecosystems has been extremely busy. There are now so many projects and events happening on the Steem blockchain that it is very difficult to keep up with it all, and Steem Power Up Day (SPUD) is just one more. Although of course I personally feel it is a worthy cause and all Steemians should participate on August 1, 2019 to make it a Super SPUD day!

In my last post I included the prizes for the winners of SPUD4 and now I will have to update the prize list since we now have a third place prize. This prize for third place though was something new for me, and made it so I had to go and find out about one of these projects happening on the Steem blockchain that I had heard about but knew very little about.

It all started when @jlsplatts sponsored a prize for one of the winners of SPUD4. He mentioned that he wanted to sponsor a SPUD4 prize, and that it would be 20 SBI, "the gift that keeps on giving." Now I had heard of STEEM BASIC INCOME (SBI) before, and knew it was a project to help Steemians earn Steem just based on the name. I knew little else about this initiative, but was grateful to be able to add more to the prize pool. I figured that when the time came to distribute the prizes, each prize sponsor would know how to distribute their sponsored prizes, including the SBI prize.

Then @davedickeyyall threw me a curveball when he tipped me 10 STEEM using the @tipu bot. The curve came when he said he wanted me to use the 10 Steem as SBI shares for a SPUD4 prize, now making him a SPUD4 prize sponsor. At that moment I am of course extremely happy to add more to the prize pool, but now I realize I have to dig a little deeper into what and how STEEM BASIC INCOME (SBI) actually works in order for it to be the "gift that keeps on giving" as @jlsplatts had said to me earlier as well as to be able to delegate it to the appropriate winner.

I still don't fully understand everything that is "under the hood" of how STEEM BASIC INCOME works. I do know that in order to start receiving SBI, you either sponsor another Steemian or a Steemian sponsors you by simply sending Steem (minimum 1) to the @steembasicincome account and in the memo section putting the name of the Steemian that is to receive the SBI. I believe the team over at SBI then manually add that user in the memo to the SBI list in order for the program to then start up voting on the sponsored Steemian's posts. The payout from those automatic upvotes from SBI's various voting accounts, I believe, is the "STEEM BASIC INCOME."

We ask that Steemians that are able, to POWER UP any amount of STEEM they have on SPUD day.
We ask Steemians that are currently Powering Down, to put a Stop on Powering Down for that Day, and if desired to commence the Power Down the following day.
We ask that those that trade or sell Steem to Not Sell or Trade Steem on August 1, 2019, but to do it the day before or after if possible. Also, to cancel any type of Sell Order on the Exchanges.

Rules to Win Prizes for SPUD4 :

another Steemian has 100 Steem Powered up prior to August 1, and on August 1st Powers Up 20 Steem, then this 2nd user would be winning with a 20% power up versus the first example with a bigger power up but smaller percentage of only 10% based on their account.

Cheers Everyone, and Happy SPUDDING!

PS, SPUD4 could use this information in all the different languages used on the Steem Blockchain, thank you!!

wow! it become more interesting by adding third price......thanks to all sponsors....

@steembasicincome works like this.. 5 "units" for you and 5 for me..

I think you check it like this.. or in Discord

All your posts are interesting.my friend @streetstyle . Thanks

Thank you, glad you think so. Take care. #spud4 #sbi

I believe the team over at SBI then manually add that user in the memo to the SBI list in order for the program to then start up voting on the sponsored Steemian's posts.

This is all automatic now, but you have the right idea. Our helpful resources post is a good place to get started if you want to deepen your understanding.
https://goldvoice.club/steem/@steembasicincome/helpful-sbi-resources

Oh, ok even better then. And thanks for the info, and the work you do to support STEEM and its community!!!

Yes, thanks to the Steem community @alokkumar121 Thanks for supporting #spud and #spud4

If my contribution is useful, I will be glad to enter the project again
250 SP from me can be used by you;)

So awesome @taliakerch and of course we welcome your Support!

SPUD4 is getting better and better!!

It's nice that more people sign up as sponsors of Spud4, and you have to update again I see. @taliakerch is back and sponsoring.

Yes, I see that @xpilar It seems the community is really starting to like this event. It would be nice to see STEEMIT, inc help support this initiative too... if enough of us keep this up they just might take notice!

And thanks for being such a great sponsor!!

Yes @streetstyle, let's keep it up and SPUD will be seen by STEEMIT, inc.

I will be sponsoring next time also if you start SPUD5.

Thanks become a great person here and give a support for us sir @xpilar. I have promote in my post twice, but I just see a new rules here. May I add this information again in my post sir @streetstyle or just editing my post before ? Thanks and blessing

Thank you much!! @jlsplatts I am only now realizing how great of a program SBI truly is for helping others.

@foodfightfriday gives away 3 shares of Sbi each week. It’s a friendly food sharing... I guess you could call it contest??... that happens every Friday. No need to be a special order chef or some fancy pants cook. Just post up anything food related on Friday and tag #fff and your entered into the weekly contest. Where anyone is able to vote. Your post could be a restaurant you visited, some nasty food you made or something nasty in your food. It doesn’t matter asl long as it is original and involves FOOD.. .. sorry I felt like that was an opportune time to give a pitch. Lol. Me along with the help of 2 other people run Food Fight Friday (@weirdheadaches and @dandays) we just hit our 1 year mark. Yahoo!!

Ok now SBI is awesome and I don’t know why I don’t use it more frequently. I just seem to forget about it. I feel it is a great way to make a big change.
🍻. And I hope to see you this Friday... 😉😉

I agree that SBI is a great tool for helping out minnows...

I looked at the google file but don't see the new SBI you sent... will check this way... I am learning!

Winning prize for program spud4 is supperb, its also help for bonding strong and pure community.

@streetstyle I like to add something if you like you can include in your prize also. I like to contribute daily 1 post 100 % upvote to the 1st and 2nd winner for 1 week. Currently my upvote value is 0.02$ I know it's small , but I believe in giving back to community and I have a faith in steemit. Please reply if it can be added in the prize.

And will be powering up also some steem for better growth of steemit.

Can't wait to power up sooner lets do it :D

As you know I have always supported your Spud Initiative
and let me do so with helping with the prizes I will sponsor 10 SBI Shares for the prizes :)

Thank you so much for supporting and now sponsoring a prize for #spud4 So amazing!!!

Leaving my support to your good intentions.
https://goldvoice.club/steem/@jadnven/august-1st-turn-on-your-steempower-up-spud4

Thank you for supporting the #spud4 initiative!!

contact @sultan-aceh on his blog and see what he writes about SPUD, He joins as sponsor of SPUD4 with delegate SP

Thanks for this info. @xpilar

Maybe you can help, I am not sure exactly what is the prize for #spud4 that he is offering.

the other 1000 he mentions is for a different contest, correct?

Not sure, awaiting to hear back from either you or Sultan-aceh,

Both awards with delegate SP from @sultan-aceh are for SPUD4

The winner of the competition receives 1000 SP delegated

If the 1st place winner is from Aceh, Indonesia there will be 1000 SP extra delegated from @ sultan-aceh a total of 2000 SP

If there is no winner from Aceh in 1st place, these 1000 SP extra will be delegated to another winner on the prize list of SPUD4 where you think it fits

Thanks @xpilar I will update the prize list later today. Thank again for all your support making this #spud event event greater!!

I still can not be considered for the award but I like to support these projects that help the platform. successful friend @streetStyle

Your numbers are very close though @adeljose If not this time then most likely the next one will be where you can qualify for a prize should you power up enough Steem Power. In the mean time you can help support the #spud initiative by voting, resteeming and letting others know that there is a #SPUD4 event with prizes.
Thanks again for supporting.