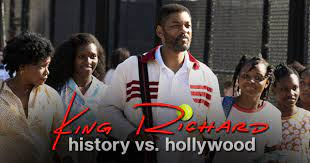 King Richard is a very nice, inspiring and emotional movie. Based on true events, the movie shows how tennis stars Venus and Serena Williams were made tennis legends by their father Richard Williams. Of all the movies I've seen so far this year, this one is my favorite. It would not be wrong to call this movie the best acted movie of the year.

First of all, the story of the movie is impossibly inspiring. Moreover, my emotional attachment has been made especially in the first few scenes of the movie because the love between father and his daughters is deep in the movie. It was heartbreaking to see a father dreaming for his daughters and trying so hard to make them come true, overcoming all adversity and tears welling up in his eyes.

Secondly, the dialogues of the movie seemed very strong to me. It is because of the dialogues that the movie has been able to evoke every emotion so beautifully. Moreover, the execution of the story is perfect. The screenplay is arranged exactly as it should be. Another important point is that since the movie is sports centric, the atmosphere of tension while watching the game has been created in such a wonderful way that you can easily get into the movie.

Thirdly, the acting of the movie is absolutely fantastic. In a word, extraordinary. Will Smith plays Richard Williams. He gave the best acting performance I have seen this year. He has contributed the most to bring the emotional feeling in the movie.It is important to note that as a parent, he has been able to put his personal experience to good use in this role. Saniyya Sydney as Venus Williams and Demi Singleton as Serena Williams have done very well. The chemistry between the parents of Will Smith's character is quite strong with them. Aunjanue Ellis as their mother Oracene Brandy Williams in the supporting role.

The main focus of the movie is Venus Williams, so she is shown most of the time, but Serena is also no less than her in some parts. Moreover, I find Richard and Brandy's daily struggle to give their daughters a healthy, normal and beautiful future and their unique ways to build them as good people very important and interesting. More or less everyone will find Richard's expressions and reactions similar to those of their fathers, at least I did, so maybe the movie touched my heart so much.