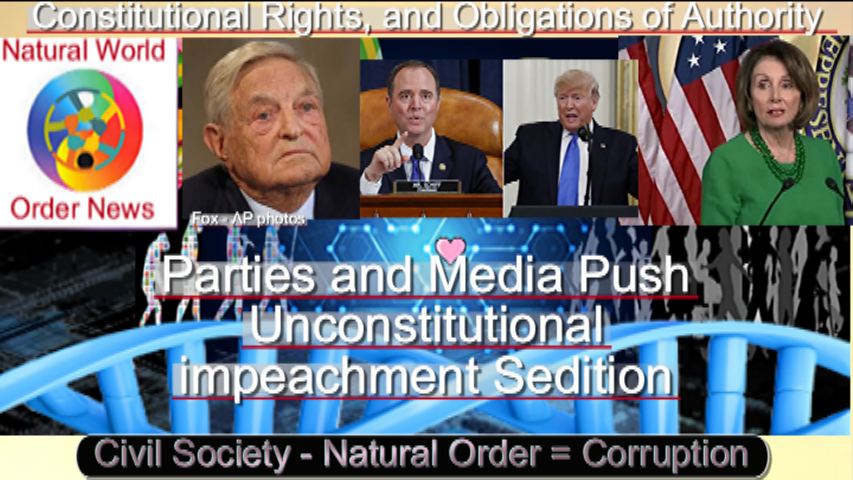 Without the constitutional authority stipulated under law, the senate and president, under the banners of the parties, both seem eager to drive seditious impeachment with a small i, to a vote.

Seditious impeachment Is Not Constitutional Impeachment

Anyone who advocates for a U.S. Senate trial, based on this seditions process owns the results of throwing away the Constitutional authority of the People. A full hearing with all evidence and witnesses, required under the Constitution, that affirms a vote of Impeachment, is then Impeachment and is duly authorized by the People, under their authority in law.

Other than the part about the House conducting Impeachment inquiries which you can look up, this is the other justification.

It involves the secret way in which the current Intelligence Committee and the Speaker are conducting their self described and media affirmed impeachment. Here is a Fox news analysis from today. Party power politics at it’s finest.

The House does not need to follow the Constitution to call witnesses to advise in testimony for the determination legislation. But any legal proceeding involving creation of law and edict must follow completely the process of rights protection under law in the Constitution.

2: Each House may determine the Rules of its Proceedings, punish its Members for disorderly Behaviour, and, with the Concurrence of two thirds, expel a Member.

However committee use of power, denying all witnesses connected to the subject of inquiry, their right and obligation to testify, under threat of penalty, violates the People’s rights under the Constitution. It is in direct violation of the fourth and fifth articles of the Constitution.

Case for Cease and Desist Under Threat of Indictment

Pretty simple. Anything with the authority of law in or created by government, must comply with the rights and obligations process of the Constitution. Yet the Intelligence Committee is granting itself rights over the rights of the citizens it wishes to inquire about.

Legislative bodies can form committees to inquire about anything. They can invite testimony of anyone. They can compel testimony based on any device that occurs to them. But they cannot compel testimony or evidence under penalty of law, without evidence of a crime. A crime that can be potentially proven in a court of law. Testimony compelled, with concrete evidence, allows questions to possibly be resolved under congressional authority, without, or with lessened, legal action required and then findings are applied to legislation.

Legal action for seizure of evidence and forcing testimony then follows these guidelines.

The right of the people to be secure in their persons, houses, papers, and effects, against unreasonable searches and seizures, shall not be violated, and no Warrants shall issue, but upon probable cause, supported by Oath or affirmation, and particularly describing the place to be searched, and the persons or things to be seized.

In other words. If they have no evidence of a crime, or are not allowing other evidence  that absolves crime then they are not forming law under legal authority. Impeachment will become law. So under what authority are they suggesting penalties for crimes against those who refuse to appear, based on hearsay not evidence. Evidence compels authority in the Constitution as long as it is ALL evidence? They are looking for evidence of only one kind. Not Constitutional as the basis of authority to seize property or compel testimony They are in effect, signalling to the judicial and Justice Department, that they expect them to prosecute crimes they designate as violating their committee process, even if it violates a citizen’s rights under the Constitution.

These are the rights of persons under law.

No person shall be held to answer for a capital, or otherwise infamous crime, unless on a presentment or indictment of a Grand Jury, (a process where all evidence is introduced (editor)), except in cases arising in the land or naval forces, or in the Militia, when in actual service in time of War or public danger; nor shall any person be subject for the same offence to be twice put in jeopardy of life or limb; nor shall be compelled in any criminal case to be a witness against himself, nor be deprived of life, liberty, or property, withoutdue process of law; nor shall private property be taken for public use, without just compensation.

Then there s this
Article VI (Article 6 - Prior Debts, National Supremacy, Oaths of Office)

*Impeachment, committee rules, inquires for legislative purposes, are all Things allowed in the constitution.

3: The Senators and Representatives before mentioned, and the Members of the several State Legislatures, and all executive and judicial Officers, both of the United States and of the several States, shall be bound by Oath or Affirmation, to support this Constitution;

The Committee Operates Outside Of Clearly Defined Mandates

The laws of the land then cannot violate this process or they are unauthorized as law.

The right of the legislature to conduct themselves as they need, would be defined as a Thing in the Constitution, not a law unto themselves. Their process is not law, and cannot override the framework of protections in the Constitution of and for the People from Government.

...the Laws of the United States which shall be made in Pursuance thereof; ... under the Authority of the United States, shall be the supreme Law of the Land; and the Judges in every State shall be bound thereby, any THING in the Constitution or Laws of any State to the Contrary notwithstanding.

At the very least they’re is evidence of violations of oath of office. Current rules laid out by the Intelligence committee do not allow for all evidence to be submitted for questioning as authorized under law. When you get the various corporate medias’ message of this illegal process, it is reported as an arbitrary consideration to score political points, that has no bearing over House procedures.

The process governs the authority for House procedures, in regards to legal action over all citizen rights. That is, no one person or body in government, has authority to compel violations of due process rights, unless in times of war and such as you read in the Articles and amendments.

CHALLENGES OBLIGATIONS AND AUTHORITY OF THE POLITICAL PARTIES

The House is obligated to a full and open hearing to decide impeachment. Only if voted under this process, can an Impeachment trial be considered in the Senate, or participated in and advocated for, by the President.

The Senate is obligated to investigate the House and call all witnesses and introduce all evidence available, in order to clarify House actions immediately. Are Hose members, violating their oath or office?

Any attempt to advance this current State Department and international intelligence community, political operation product, packaged as Impeachment, is evidence of seditious impeachment fraud against the People, their rights, and their Constitutionally authorized government

Challenges, Electoral Obligations and Authority Of The People

Since WWII the People have voted in a more international oriented government, in order to create a world order, to end world wars. This has worked in many ways.  As a result, the government over time has...