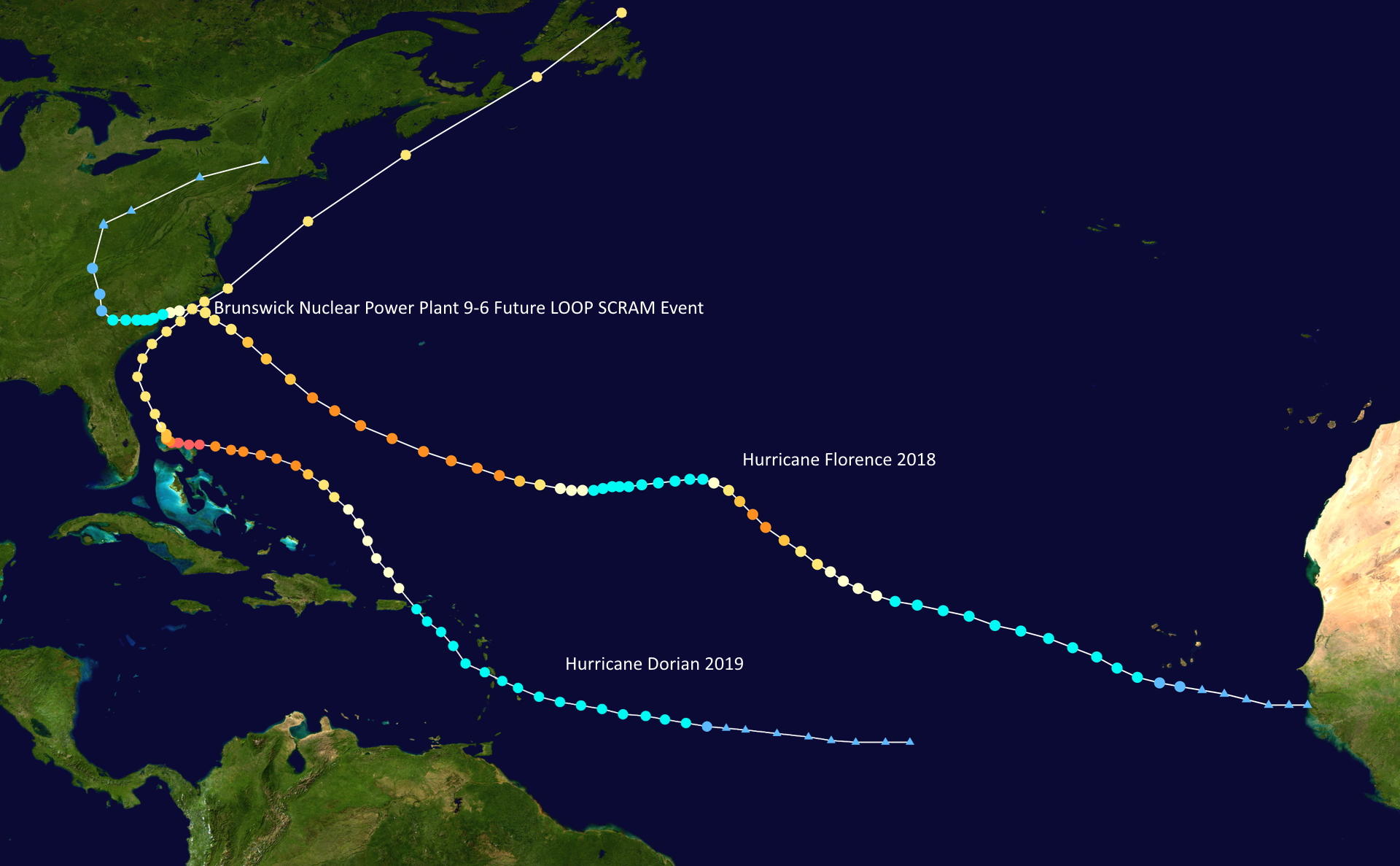 What are the chances!

The only Nuclear Power Plant SCRAMMED during this Hurricane.

Another 2 days of nail biting tension.

The acronym SCRAM was coined by Enrico Fermi the father of the first nuclear reactor built in the USA during the Manhattan project it stands for Safety Control Rod Axe Man.

If they lost control of the first ever reactor by moving neutron absorbing control rods in and out of the huge pile of graphite bricks and Uranium fuel assemblies. The Axe Man (Axe Person in PC speak) would run in and start hacking the reactor apart to break up the geometry and halt the nuclear reaction.

This was a suicide mission and never actually required as the calculations governing the first ever nuclear reactor design by the Genius Fermi proved to be correct. The equations could never be modelled without the modern computing resources of today and there was no time to beat Nazi Germany also racing to build the bomb to do it in a safe way.

The Brunswick Boiling Water Reactor (BWR) is the exact same type as the flawed Fukushima Westinghouse design where control rods are pushed up from below and in a core over heat event are extruded in the early stages of core failure like spaghetti causing the reactor to go super critical.

Normally a LOOP (Loss of Outside Power) event will trigger a SCRAM event.

It can be argued Nuclear Reactors are just as dangerous shutdown as running. Both modes require continuous (years) circulating water to modulate neutron production and remove isotope decay heat. Even poisoning the reactor with a neutron absorbent like Boron still does not stop heat build up within the Uranium fuel rods.

BWR reactors don't have poisoning systems build in like other designs as the reactor can never be restarted without complete replacement of the core. A very expensive and unsafe process taking years to complete and re-commission.

When excessive power outages caused by downed power lines trip the main circuit breakers the reactor must be taken offline to reduce the electrical power in the local grid. If the reactor supply grid is still connected the reactor can be idled down with outside power to run the pumps and control systems.

Should a LOOP (Loss Of Outside Power) event occur the systems will switch to Diesel Generator Electricity Supply and if they fail to start or keep running battery power takes over. There are multiple layers of redundancy in a modern Nuclear power plant.

After Fukushima changes were made to allow a smaller steam turbine generator to spin up and supply emergency system power for pumps and control systems, a bit like a oil cooler fan starting up in a car idling in traffic, after a oil temperature sensor trips it.

This all takes time to change from a full screaming power mode to idle mode. It requires a sequence of steps that are only ever tested in isolation as it is too expensive to test when in production and may damage the grid if they suddenly switch a power station off!

Throttling a BWR reactor using pump water flow is something the layperson finds a bit counter intuitive to understand and is never explained in main stream media as the details of this mechanism is related to bomb design and is therefore classified.

The smoother the laminar water flow through the core the less the neutrons are scattered and find another Uranium nucleus to strike, keeping the fission chain reaction going and the reactor produces more power.

If the water flow is lowered giving time for steam bubbles to form within core more neutrons are scattered within the geometry of the matrix of the fuel rod assemblies where the greatest probability of hitting another Uranium atom is at right angles to the water flow.

The Uranium fuel pellets are housed within zirconium steel tubes which function as amour plating. Sloping armour is more effective at stopping a round as army tank designers found out.

So in theory this design is genius in safety, hence the chest thumping and quiet confidence of the Safety officer as he hoses down any concerns from a hung over journalist during press events.

If the water supply drops the reactor will power down BUT the core must NEVER be allowed to boil away to the point where the water level exposes the fuel rod assemblies as then neutron flow is unimpeded and the reactor starts powering back up but not in a slow controllable way within nano seconds heat and pressure levels increase exponentially until something goes bang. Falling power levels as the Fukushima batteries ran down resulted in sluggish water valve movement and started this snowball.

The plant can start to oscillate in power as the emergency water flow valves move in cycles of increased and then decreased flow until they get 180 degrees out of sync with the reactor that responds in nano seconds to changes compared to milliseconds for sensor valve movement feed back loops. Something similar happened at Chernobyl.

There are multiple redundancy systems to prevent the core being exposed all centred around the Emergency backup generators that are routinely tested to startup immediately at the start of the LOOP.

If they fail batteries switch over to provide power for a few hours until power is restored. The Fukushima disaster occurred when power was not restored in time and the failing battery electricity supplies to the emergency systems started the countdown to disaster.

The weak link is the emergency generator fuel supply system.

I have no information something untoward is going to happen and it would take a CONSPIRACY to circumvent all the redundant safety systems.

Sabotage is one possibility. An armed hostage lone gunman with a death wish situation is another.

One method of sabotage would be small canisters of a fuel contaminate like sugar secreted within components of the complex fuel system designed not to open during routine testing.

Lying dormant like a cancer cell until some signal or system condition triggers them. The would never be found after the event as the site would be too heavily radioactively contaminated for any engineering forensics to take place for hundreds of years.

Diesel engines would stop never to restart without replacement, all taking time the operators don't have. Mobile Gensets could be flown/trucked/shipped in but something not easily done in the middle of a storm with congested roads, bridges down and a flooded site.

You will notice the Satanic Illuminati symbolism of the Hurricane eye as Dorian ploughed the Bahamas back to a hunter gather society. This satanic sacrifice of hundreds if not thousands of victims will be revealed when reports finally trickle in after first res-ponder relief efforts are complete.

The average person can not comprehend such evil.

If a major event occurs, who would the Main Stream Media blame and call for Impeachment?

What is the official motto of Bermuda, What is the name of the new Not for Profit Organisation set up for HRC coincidence ?

Watch for shorts on Duke Energy (DUK) the owner of Brunswick NPP.

God bless all, go in peace without fear.

Strap a Synth On
0