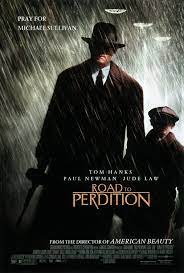 Comics has become one of the main sources of international films, evidenced by superheroes' 10-year-old superhero movies that are expected to continue to grow in the coming years, but the fact that comics are not only about superhero adventures, but more comprehensive, diverse and numerous.

Together, we'll learn from the following paragraphs a variety of films of different styles that have been made for the world of superheroes, such as crime, thrillers, science fiction and even horror, and the only link between these films, all of which are different, is that they have all been quoted from the world's comics.

The film takes place in New York City during the 1930s, when the city was mired in corruption and a hotbed of gangsters and crime emperors, in that dark atmosphere of the hitman Michael Sullivan (Tom Hanks), who works for one of the city's most powerful and influential men, but turns his life upside down when his son watches him commit one of his crimes.

The film is based on a series of comics created by writer Max Allan and painter Richard Pierce Reinar,released in 1998 by a number of publishers, most notably DC Comics. The film was a huge success when screened and received warmly by critics and audiences and won a single Oscar for best cinematography out of six nominations, starring Tom Hanks, Paul Newman, Daniel Craig, Jennifer Jason Lee and directed by Sam Mendes.

The film 300 takes place in 480 BC, reflecting the epic battle between the Greek knights on the one hand and the armies of opportunity on the other, during which King Leonidas of Sparta led 300 of his valiant soldiers in the face of the aggressor armies in defence of their land, despite their full certainty of inequality.

The 300 film was adapted from a graphic story by Dark Horse, directed by Zack Snyder, and was a huge public success when it was released in theaters, generating revenue of approximately $455, and this success was invested by presenting a second part of the film in 2014 entitled 300: Rise of an Empire.

The horror and mystery film from Hell revolves around a series of gruesome murders in which women are targeted, forcing Inspector Frederick Apperlin (Johnny Depp) to go there to investigate, but as the fact-finding begins, he reveals a lot of facts and realizes that these crimes are more serious than they seem, and finds himself caught up in a series of horrific events.

The film is inspired by a graphic novel by renowned creator Alan Moore published in the UNITED States by Top Shelf Productions and published in Britain by Knockabout Comics. Alan Moore, author of the original novel, co-authored the screenplay with Eddie Campbell andTerry Hayes,while the film was directed by brothers Albert andEllen Hughes.

RED revolves around former CIA agent Frank Moses (Bruce Wells), who finds himself and three other retired agents targeted by a mysterious party seeking to liquidate them, forcing them to come together and unite their efforts to solve that mystery, prompting them to search the past and search the secrets of the country's largest security establishment, revealing many shocking and unexpected facts.

In 2003 and 2004, six years later, director Robert Schintke took it to the big screen in a film starring Bruce Wells andMorgan Freeman,a second part of which was presented in 2013 entitled RED 2 but was unsuccessful.

The film revolves around John Constantin (Keanu Reeves), a spiritual expert who is hired by Detective Angela Dodson (Rachel Wise) to help her uncover the mystery surrounding the suicide of a young girl, and John accepts to do the job that leads to numerous confrontations with demons and lower powers.

The film is based on one of DC's most famous horror literature comic series, Hellblazer, which continued to be presented between 1988 and 2013. Constantine, directed by Francis Lawrence, was praised by audiences and critics when it was screened, and received high critical ratings on major film sites.

Set in the future, the film revolves around a mysterious militant known as "V" (Hugo Wing), who works to resist the totalitarian regime in control of Britain, one night rescuing a girl named Effie (Natalie Portman) and trying to push her to ally with him and help him implement his grand plan that would restore normalcy in his country and rid her of the repressive regime in control.

The character "V" and the events of the film are based on a series of illustrated books by Alan Moore publishing house Quality Communications and first presented in 1988. Written by Andy Wachowski and directed by James McTeague,the film has achieved great success around the world when it was released in theaters, has received many positive critical reviews, and is still ranked among the highest-rated films on major film sites.

This thriller and science fiction kicks off in Arizona in 1873, when an enemy spaceship arrives in the Western American region in pursuit of precious gold metal, forcing Native Americans to ally themselves with white people (cowboys) in order to repel that brutal attack that poses a threat to both and to the future of the human race in general.

Cowboys & Aliens' comic novel by Scott Mitchell Rosenberg was released in 2006 by HarperCollins, and five years after its release was presented on film by director John Favrio,the film was co-starring Daniel Craig, Harrison Ford, Abigail Spencer and BuckTaylor.

Set in a dark atmosphere within a corruption-ridden city that is a hotbed of gangsters and outlaws, the film reviews the nature of life in this dysfunctional city by tracking the paths of three scattered characters, but all of them are linked in one way or another to some violent crime.

The film was adapted from a series of stories released between 1991 and 2000 by Frank Miller, who also co-directed the film alongside Robert Rodriguez. The film was outstanding in various respects, especially photography, presenting an unconventional and out-of-the-ordinary cinematic image, and in 2014 released a second part of sin city: A Dame to Kill For, but it did not have the same success.

Men in Black combines comedy, excitement and science fiction with a future story about agents Kay (Tom Lee Jones) and Jay (Will Smith), a secret security organization involved in protecting the planet and dangers and threats from outer space, and are then tasked with tracking the activity of a group of aliens who have infiltrated the planet and live hidden among humans, but events bring them a lot of surprises and put them in the face of many challenges.

The first film, directed by Barry Sonnenfeld, was a huge success, prompting producers to present two more parts in 2002 and 2012, and the series is expected to be revived next year in 2019 with a new film, Men in Black International. The entire film series is based on a series of graphic stories created by Lowell Cunningham, first released in the early 1990s by aircel Comics and Malibu Comics, and later acquired the series's intellectual property rights.

The film takes place in the distant future about combat soldier William Cage (Tom Cruise), who has never fought a real battle before, and suddenly finds himself demanding to confront a breed of alien known as "Memek", which began to take control of the entire continent of Europe, but during the battle he is exposed to a strange situation that reveals many secrets that he can use to resolve the battle and end the state of war forever, in order to unite with a Special Forces soldier named Rita (Emily Blunt).

The film is based on a 2004 Japanese comic book series entitled All You Need Is Kill, created by writer Hiroshi Sakurazka,directed by Doug Lehmann and received great praise from critics when it was screened, and achieved great success in the commercial side with revenues exceeding $320 million globally.