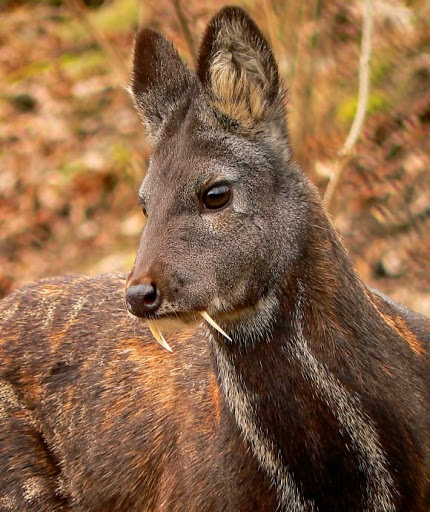 Cryptids come in different forms. They can be legendary animals from folklore, unknown species and even extinct/prehistoric species.

The Kashmir Musk Deer, a.k.a the Sabretooth Deer was thought to be extinct and considered a cryptid until 2009. The deer was said to have gone extinct in 1948 because none were being scientifically reported.

This species of deer is native to Afghanistan, India, Nepal and Pakistan. They measure up to 3 feet tall, weigh between 15-37lbs and only the males have the protruding fangs coming from their mouths. Kashmir deer are a species known to be loners, they do not hang out together in herds.

There was a survey conducted in June of 2009 by the Wildlife Conservation Society in Nuristan, Afghanistan where they found a few specimens of the Kashmir deer. This of course confirmed that the species was still living, however it is an endangered species.

Throughout Asia, there are seven other similar species of deer. Specifically, the Kashmir musk deer is the only endangered one of the bunch due to loss of habitat, deforestation and even poachers. The Kashmir deer is a treasure trove for poachers because of the animals scent glands which value at nearly 45k. They have been used in cosmetics, fragrances and traditional medicine. Absolutely horrible.

I don't consider extinct species to be cryptids but I can see why they are. The general definition of Cryptozoology refers to proving the existence of entities from folklore. However, some dictionaries define cryptid as animals whose existences are unsubstantiated (not supported or proven by evidence). I think the argument with that is although extinct animals did exist at one point, there is no evidence that they still do thus "unsubstantiated." I know... that makes no sense but that's just what I think.

Anyway, thanks for coming by! Don't forget to follow!