BUILD THE EARTH CONSTRUCTION HUNT WEEK #5: A CONTEST FOR BUILDERS AND VIEWERS: MINECRAFT TOUR OF AUSTRALIA 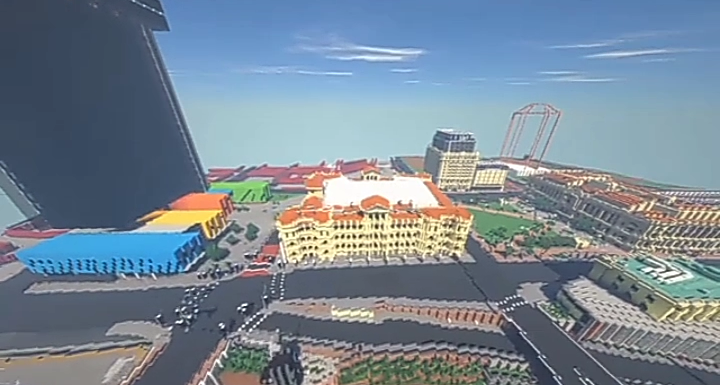 WELCOME TO MY PAGE ONCE MORE

This post entails my entry to the build the earth (BTE) construction hunt week #5, a contest for builders and viewers on the steemit community. As always, I won't fail to appreciate @cmp2020 for getting me enthused about these Minecraft projects through this same contest, it has been really informative, educative, creative and most especially, fun, participating in these contests.Thanks once more!

Now let's explore the ever amazing world of Minecraft!

For this week's construction hunt, let's take a tour of the beautiful country of Australia. The BTE Team Australia constructed a build worthy of high praise, displaying the most astounding and picture perfect locations in Australia and I think this would be a delightful video for builders, viewers, lovers as well as enthusiasts of Minecraft in the entire steemit community.

Without any further delay, please join me in this tour of Australia's top 5 finest, historic and most fascinating locations:

PS: PAY CLOSE ATTENTION TO THE NARRATOR FOR COOL FACTS ABOUT THESE LOCATIONS. DON'T FORGET, HE KNOWS ALL!

The Old Treasury building Musuem is located on the spring streets, Melbourne and was originally constructed as the treasury department during the Victorian Gold Rush. This was an era when the capital city of Melbourne exhibited the height of its financial strength. It was a time of extreme prosperity during the pre-austrialian era.The building was designed by a 19 year old young architect by name J. J. Clark and has been one of the finest edifice of the neo-renaissance era of Austrialia.

From the aerial perspective, you can clearly see the builder used orange and white blocks for the roofs,as well as milky yellow blocks for the rest of the build, typical of the original structure.

You can also see the greens of nature( trees and plants) perfectly intertwined with the modern civilization of tarred, interlocked roads, street lamps and buildings, creating an atmosphere for a perfect build.

This is a skyscraper located in Barangaroo, north south Wales. This is why it is commonly known as the "one Barangaroo". This magnificent structure accommodates a hotel, residential apartments and a casino. Pretty amazing, right?

Another interesting fact about this structure is its Unique height of 890ft with 75 floors, making it the tallest building in Sydney and the fourth tallest in all of Australia. This build is my personal favorite from this week's presentation, I must say, especially because of the replication of the colossal structure as well as the surroundings.

For a proper look, I always prefer an aerial view and you can visibly see the use of lapis block for the main structure which produced a lustre effect typical of a shining blue glass.

As well, sand/gold blocks were used for the rooftop, incorporated with grass blocks too. This gave the rooftop display a more natural atmosphere.

The Green spine accommodates series of skyscrapers proposed for Melbourne and developed by Beulah. The architectural framework of these structures were designed by UNstudio and Cox architecture. They are generally called the "southbank towers by Beulah".

The towers are proposed for commercial and residential purposes, the skyscrapers seem to curve in a spiral twist and will have vegetative foliages and trees growing on balconies along their exteriors/ outdoor settings, as you can see from the build.

Characteristic blocks used in these builds are the lapis block for one of the towers (blue tower), the spiral towers were built with a combination of coal blocks for the main building and gold blocks for the outdoor exteriors. Similar blocks were also used for the third and shorter tower.

The stupendous Syndey opera house is a cultural marvel of the world, located at Syndey, North south Wales. The structures was designed by danish architect jørn utzon and regarded as the 20th century most prestigious and distinctive buildings. There are multiple performance centres/venues comprised in the buildings which generally hosts about 1500 performances and attended by over 1.2 million people every year. Isn't that amazing?!

A crucial and most significant aspect of these structures are the shells,which is a more conversant term for the roof structures. From the build, you can see the user's astonishing attempt to reproduce the precast concrete panels with precast concrete ribs for support and finished with over a million tiles. As you can see, the glossy white and matte cream colours were flawlessly duplicated in the build using white blocks. Sandy blocks were used for the posterior end of the structure.

The Opera House rests on the Bennelong point which is an island located on the Sydney habours. The enclosing waters was also perfectly illustrated through the use of diamond and coal blocks for the water surface which gave out a lustre effect of different shades, just like a real life model of a stagnant/low velocity water body.

The "coat-hanger", as it is fondly called, is an arch bridge across Syndey harbour which transports both humans and commodities between the Sydney central business district and the North shore. The southern end of the bridge is located at the dawes point and the northern end at the milsons point.

The Arch marks a magnificent and peculiar addition to the structure, making its more gorgeous and recognizable. It has a span of about 1,654 ft above sea level and with pylons at each end of the arch.

One of the prominent tourist attractions of the bridge has been the south-east pylon, which can be accessed through the pedestrain crossway across the bridge, a climb to the top of the pylon would require about 200 steps. That's some quality "tourist exercise", isn't it?

The build also included an exquisite stroll through the bridge, showcasing the creative poweress of the user. The asphaltic road was constructed with coal blocks and the longitudinal markings were displayed with the use of short white strips. Without a doubt, this particular build was definitely worthy of the top build of the day.

I hope you enjoyed this mind-blowing Minecraft tour of Austrialia. The most Innovative thing about these builds are they are actually replicas of real-life structures, therefore you can learn about the historic embodiment of these locations as well their significance and essence in our present world. Therefore, don't fail to grab the important and useful information in relation to this post.

Enjoy the video from the YouTube channel of BTE Australia

DON'T FORGET TO SUBSCRIBE TO THE BTE COMMUNITY ON STEEMIT USING THE LINK "HERE".