The scale of recruiting 50,000 Steem Promoters around the World may seem a phenomenal task to undertake, if an adequate Funding Mechanism was put in the place the scalability of the challenge would be made considerably much easier. 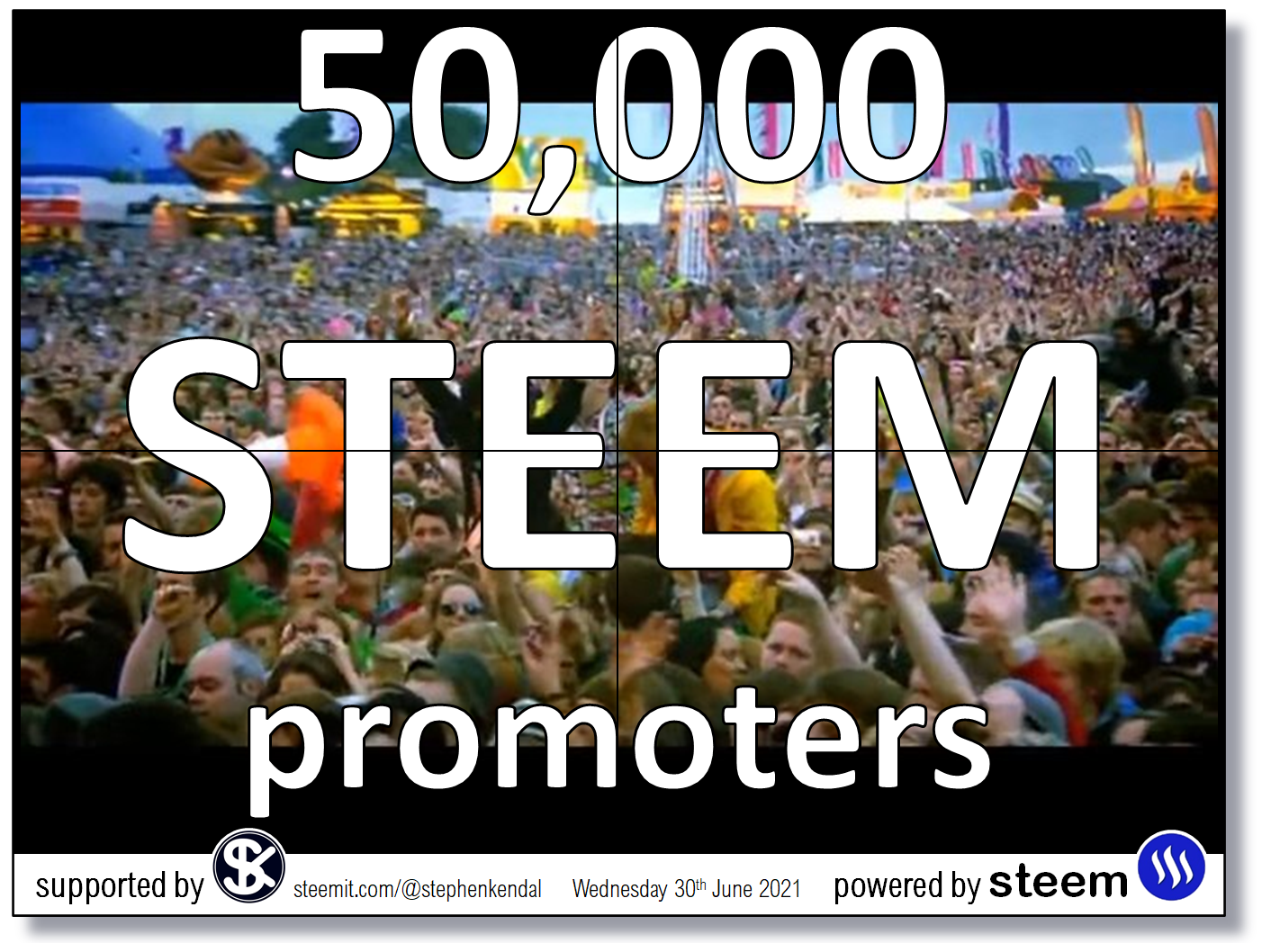 Yesterday evening I was scanning some live music festival recordings of some of my favourite bands and came across one of my all-time favourite tracks.

As I was watching the recording last night, I was focusing on the crowd and estimated that there was probably somewhere in the region of approximately 50,000 people watching the concert.

This got me thinking about a recent Blog I shared talking about the need for 50,000 #Steem Promoters around the World to help with the Marketing and Promoting #Steem.

Massive Shout-out to @kwadjobonsu for spotting the connection

After sharing the video of the live performance I received a number of comments on the Blog, but one comment stood out from the rest that has prompted me to share with you this Blog.

Before I do, for those that may have missed last night's Blog here is another chance to see the video.

I was just scanning some live music festivals and thought I would share this one with you.

Crank up the volume and enjoy.

I would like to say a Massive Shout-out to @kwadjobonsu once again for spotting the connection.

For those that may have missed the recent Blog where I talked about the issue of recognising the importance of addressing the Funding requirement for the Marketing and Promotion of #Steem here is another chance of what I said...

One of the contentious items I have talked about on #Steem over the past +4 years is the importance of getting right the Marketing and Promoting of #Steem to achieve scalability of not only the #Steem Blockchain but more importantly the #Steem Ecosystem.

Though these concerns have been raised on a countless number of times over the past few years I felt that it was important to raise them again.

Despite having been thrown in the hate bin on a number of times over these concerns I have never once deviated away from what I have talked about.

Technicals vs. the Commercials

With a career spanning over +35 years predominately in Commercial and Contract Management working across a wide range of Industries including: Construction, Heavy Engineering, Developments, Investments, Systems and Data Analysis I think it is safe to say I have earned my stripes to back up what I am trying to say.

#Steem is in an extremely unique position

Unlike anything that has ever been done in the past #Steem is in an extremely unique position in as much as what we are trying to build has never been attempted before.

As an Open-Sourced Blockchain that distributes a set number of assets through a powerful Rewards and Distribution Protocol based on Staking this extremely powerful and exciting new technology needs to be appreciated and fully understood in order to scale to the dizzy heights we are all striving to achieve.

The set number of assets I am referring to is of course #Steem and though inflationary with a tapered deflationary run-off built into the Protocol the number of assets created and thus available for distribution effectively becomes more scarcely rewardable as the Ecosystem grows.

I guess what I am really trying to say is that as more people join the #Steem Ecosystem there is less and less #Steem available to be distributed via the Rewards mechanism.

It is this message in the reduction in distributed "Rewards per Capita" I have been trying to get across over the years and especially when it comes to rewarding those that are Marketing and Promoting #Steem.

Unlike any other conventual Business

However, as with all Users the retention of these Promoters must be addressed especially as I see a requirement of at least +50,000 #Steem Promoters in the future in order to achieve the scalability we would all like.

This number of Promoters is most likely conservative and I would accept to see this number rise significantly should the demand for #Steem increase.

With such a high number of Promoters needed to scale #Steem to the dizzy heights of success what I have been trying to do over the past +4 years and have failed miserably to put in place is a Commercial Mechanism to ensure that sufficient funding is always available to reward Marketing and Promotional Activities.

Hopefully this concern I have raised once more is finally addressed and a mechanism put in place to secure sufficient Rewards are always available to develop and grow an important piece of the #Steem Ecosystem taking us into the future.

Though there are many avenues the #Steem Community could take including Marketing Partnerships I have talked about in great depth before, I do believe this topic to address the funding requirement for the Marketing and Promotion of #Steem needs to be once again discussed more.

Putting the two Blogs together

Though the scale of recruiting 50,000 #Steem Promoters around the World may seem a phenomenal task to undertake, if an adequate Funding Mechanism was put in the place the scalability of the challenge would be made considerably much easier.

By putting the two Blogs together I am hoping that all those out there already working tirelessly on various Promotional Initiatives promoting #Steem are doing so with the knowledge that if their selfless act proves to have been right, then they would be part of the small group that started this growing Army of Promoters.!!

Thanks again for reading.