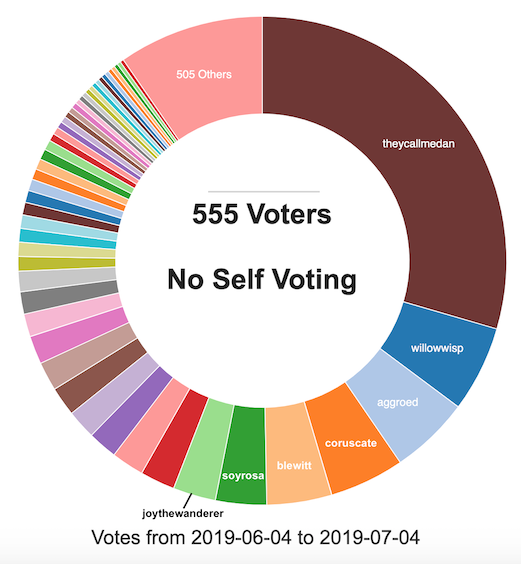 If only "New Steem" was around earlier...

While I'myself for completely honoring this, it hasn't been as easy as it sounds. I've had to grind it out.

To be honest, I would've loved to put my hard earned liquid earnings towards BTC as the tokens have diverged, but I didn't.

My backbone and work ethic won't let me no matter the opportunity cost.

Now, with light at the end of the tunnel,

♪♪ It's The Final Countdown!!! ♪♪

That's less than $55 to check the box that all 55K Steem Power I'll be keeping staked is 00% manually earned.

Then Ill be able to take this ball and chain off... and use bid-bots on every post to scrape 8% profits and inflate my reputation to 80! This was all a shas all a stone cold sham!!

So, why the heck did I do this? Why did I choose to earn all my SP outside of being ridiculously stubborn or stupid?

Well, aside from the bait and switch of emotionally accepting this advertisement...

I want to be able to tell new users that I beat the system by grinding it out the hard way, so they can use that example for hope and inspiration at the bottom. That's how Steem was sold to me above almost 2 years ago, so I simply wanted to prove that it was possible. That's some pretty solid marketing if you ask me.

I wanted to earn my reputation organically and know that I built everything with my bare hands... how people used to do things and probably still should.

I wanted to meet people at all levels and network/make friends without anyone chasing coattails or being greedy when interacting with me. You know, making sure people liked me for me as a person...

It's taken forever, but the respect mayrespect a few people may give me for my mission will be morh more it.

Iore it. Plus, I'll feel good about staying true to my goal.
I also wanted t t roots if and when I chose to make my first financial outlay into the ecosystem.
osystem.

For thful detail-oriented followers who read my posts, I've alluded to debating this investment for a while, subtly mentioning that it'd probably drop more than a few jaws. It's just a few clicks and transaction verifications away as I continue to think about if it's the right move to make.

The point of saying that is that I've always wanted to EARN my influence, NOT BUY IT, even if it's cost me in the short-term.

We've all felt the adverse effects of what happens when people buy or previously mined their influence...

So What Happens Next?

After then, I'll keep my SP powered up. I probably will ship some future liquid earnings out for some slivers of BTC, and maybe I'll upvote my other account (which I didn't even do in the backdrop as a loophole). That's about it.

Then, if Steem shows more promise and better leadership develops, pehip continues to develop, pe be a new whale in town.

Than in town, fully aware of who was there through the thick and thin.
Thankur help during this minnow run,
@steemmatt

I wish I can join youuuuu soooooooooooooon, but I just sent 100 steems to a friend in need so now I gotta find ways to make up for ittttt aaaaaaaaaa

You're a warrior too, or at least you can paint/draw one!! Thanks for being there for me on this spiritual trek. If I do reallocate things, and I'm being honest that I'm not sure if I can get myself to do so, I DO promise that I will personally catapult you and @scrawly over 5,000 SP ASAP.

ran into some jerks

I AM GOING TO WARRIOR AND GET TO 5,000 SOMEHOW THOUGH.

I'm like that guy in Winter Soldier. You're Captain America and I'm the guy that says "I'm totes like steemmatt, only slower"

I can't imagine what type of low lives would give scrawly a problem, but justice will be served in the long run. As for 5,000 SP, I'd trade it ANY DAY for the ability to be as artistically talented as you. Digital money isn't nearly as satisfying as a true art form in my eyes.

but you are amazing in so many wonderful ways! you are super friendly, super funny, and your presence brighten up anyone's day :D That's a kind of talent too, and one that is QUITE RARE in Steemit (or elsewhere)

it is the best sport

Did you ever know you're my hero?!?

Haaa. Oh stop it Foo'. I used to love that drum intro to pump me up for game time.

Lol, for real do, as a rookie trying to make it to the bigs organically you're an inspiration..

I had a smaller goal to get to minnow within a year and did just that days ago. The numbers are rather arbitrary but what's important is the possibilities and potential I've discovered.

Just yesterday I was able to finally navigate a wallet and send some steem off to figure out what to do with my teeny tiny investment.For me this was a milestone and again the value isn't the point. The point is I circumvented the man and now have my foot in the door and steem was the gateway. That's a big league move for a player that wasn't sure what a, blockchain was 9 months ago.

Looks like I'm formulating my first Leo post here lol... Seriously, though we share a similar vision and I think it's time I started calling you coach!

Nice one Matt. That's some hard working ethos. I've also never powered down and have got to my 6000+ SP naturally, with a little boost from working as a curator for curie (finders fees are paid to curators at curie for accepted posts).

I related to what you said about having doubts in what I've done. When I was really hammering the (curie) curating during 2017, many curators we're making $80-100/week worth of steem and quite sensibly cashing it out. I chose to power it up... and when I think about it, I wish I had dollar cost averaged it out and kept 50% held in a stable coin to buy back now. I'd be an orca if I'd done that. But I hope that my work ethic at least gets me some props with some people on here.

For those faithful detail-oriented followers who read my posts,

Ha ha, well you've hit on something that concerns me about steem, and what will see me leaving if anything pushes me to it. I suspect I've less people reading my content now than a year ago. This is a problem for me, as I'm a professional freelance writer. Right now, it would be a better ($ + audience) option for me to focus on tailoring my writing for the audience on medium.

But.... I'm stubborn as hell, and maybe that'll prove a good thing in the long run 🙂

That's less than $55 to check the box that all 5K Steem Power I'll be keeping staked is 100% manually earned.

Well you got my respect! (For what that's worth. 😝)
You're values are truly admirable.
Congrats on the inevitable 5 K!!! 🥂

Another 21000 SP earned all manually and organically is all it'll take to catch up with me! Not rubbing it in. I too think it would be great if more people found out this is possible instead of coming here and being told it's hard and anyone who gets anywhere cheated or simply got "lucky". Does it feel like luck or does it feel like work? I already know your answer to that.